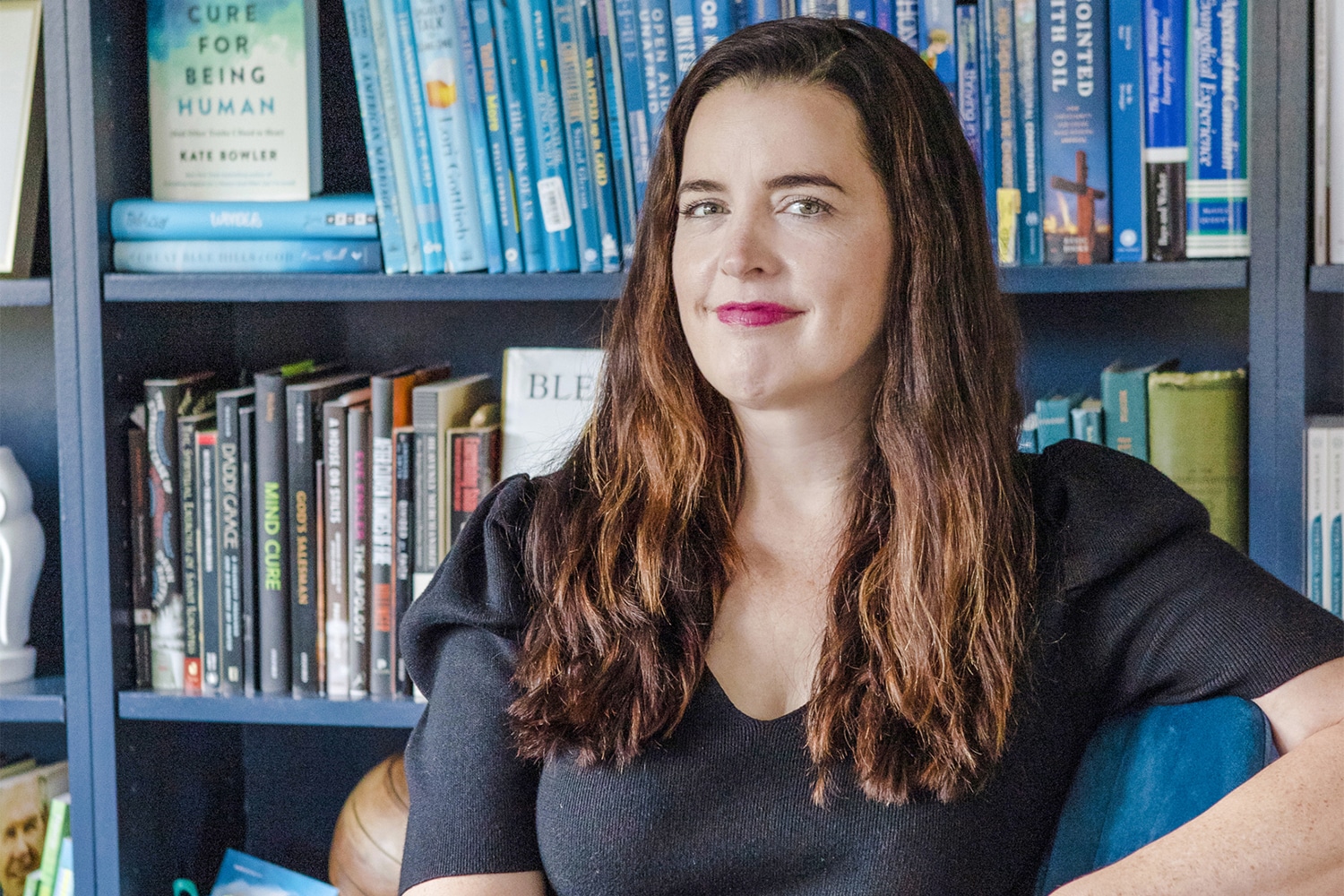 A LOVER OF BOOKS WITH AN INSATIABLE CURIOSITY, Kate Bowler was just at the start of a budding academic career when she was diagnosed with stage IV colorectal cancer in 2015. A wife who married her high school sweetheart and the mother of a toddler, the 35-year-old was compiling research and hours of interviews that would set her on a path to become full professor at Duke University in Durham, North Carolina. But a cancer diagnosis threw her a curveball.

Before she was diagnosed with cancer, Bowler had built a career studying the prosperity gospel—a movement that believes God bestows health and wealth as a reward for faithful lives. In her newly published memoir, No Cure for Being Human (And Other Truths I Need to Hear), Bowler details her attempts to make sense of her terminal diagnosis—and to question assumptions we all make to create order in uncertainty. This is Bowler’s second memoir. Her first, Everything Happens for a Reason: And Other Lies I’ve Loved, was published in 2018.

With more time having passed since her diagnosis, Bowler, whose cancer responded to immunotherapy, offers stark accounts of her encounters with her physicians as she strives to keep her humanity. Their responses to important questions fall short. “I never was asking for certainty,” she says of the exchanges, “but [there was] the refusal to answer questions of how to best bridge what I’m hearing with the kind of choices I should make for my care and in my life. It’s a really simple question that requires half a step, certainly, which I have found doctors to be unwilling to do because they think I am asking for certainty, which I never am.”

Through March 23, we will be discussing No Cure for Being Human (And Other Truths I Need to Hear) in our online book group.

Bowler writes about her oncologist at Duke. He is roughly the same age as Bowler—and under other circumstances would be connected to Bowler by their work at the same esteemed institution: “He has perfected a disappearing act that I will come to recognize in doctors. Under his white coat, he could be anyone.” Each week, Bowler boarded a plane for an early morning flight from Durham to Atlanta to participate in a clinical trial. She endured these trips—only to learn later that the immunotherapy drug could have been ordered through her local oncologist months earlier. The reason for the delay, her oncologist told her, was a professional courtesy to the researchers to avoid altering the path of the clinical trial. “While I always knew that my medical treatment could be harsh, painful, and potentially deadly, I never realized that I was not a patient and did not have a doctor. I was a ‘study participant’ assigned to a scientist,” she writes.

Bowler’s writing takes on an ethereal quality as she ponders her place after her diagnosis has shifted the ground of the most normal exchanges. These moments, like our mortality, are always fleeting. For Bowler, there will always be questions. Even as she feels grateful to be alive, she considers her condition to be a chronic one—and one not easily understood by the average person. “Is it bitter or unkind to want everyone to remember what I can’t forget?” she asks as she writes about the adjustment back to life after learning her tumors were gone. “Who wants to be confronted with the reality that we are all a breath away from a problem that could completely alter our lives?”

Bowler recently spoke with Cancer Today to discuss this adjustment and what she’s learned in the years since her diagnosis.

CT: Why did you decide to write a second memoir?
BOWLER: Everything Happens for a Reason: And Other Lies I’ve Loved was written in a crisis. It was written in the big moment of disbelief. I wrote it in about a month because I was so frantically trying to make sense of a life that was suddenly going to come to an end. The first one ended up focusing a lot on the cultural clichés we get when we’re in a crisis. No Cure for Being Human is about trying to deal with life, not as a crisis, but as a chronic condition. We keep living with the things we didn’t choose, but it turns out there are all kinds of clichés and advice for that, too, so that’s what I was digging into.

CT: Did you find it difficult to write a book about the easy formulas we typically fall back on in crisis without finding yourself using language that felt cliché?
BOWLER: All patients diagnosed with cancer have a before and after in their lives. The diagnosis draws a line. I found in my “after” life, I wanted mostly to return to the person I was before who had a lot of clichés and formulas for how to live and get ahead and have an uninterrupted life. I guess that’s part of what I am always so interested in: the way we’re usually a quarter turn away from really good advice. “Be present” is wonderful advice unless, of course, you feel the insane, wild, frenetic pressure of trying to make every minute into a moment. Then it’s a terrible idea. So I think it’s nice to kind of pick up each of these formulas and to look at them and to try to adjust the dials and create wisdom.

CT: What advice would you give to cancer patients who are struggling to come to this wisdom on their own?
BOWLER: I think one of the hardest questions about having cancer is thinking about, “How do I spend my time in a way that feels beautiful and meaningful?” It can be tempting to want to answer that question with a list, and then believe that list is going to add up to something that feels like enough or more than enough. My conclusion at the end of all of this, looking at the advice, is that sometimes when we’re doing it right, it just stays really painful. If we stay in love with the world and the people that we’re given, and stay desperate to spend time with them, I don’t think we’re going to find a set of experiences or moments that are going to make it OK. We just take ourselves off the hook of wondering if there’s a solution to the problem of pain. It’s OK that there isn’t one.

CT: Has it gotten easier now?
BOWLER: My illness is a chronic condition. I don’t get to have the sense that things are behind me, and I think that’s a difficult place to learn to live, because our culture has so little language for these problems that persist. They have words like scanxiety, which drives me insane—it almost pathologizes genuine fear. We’re just afraid of things that are pretty reasonable to be afraid of. I would love for patients to feel more compassion toward themselves for the fact that we really don’t get to know, but also that the people around us should be trained to help us make fine distinctions. Having someone [who uses] loving, careful language would make my life a much easier place to live.

CT: You started a podcast, Everything Happens, where you discuss these topics with experts and authors. Does that help to create that place?
BOWLER: I think the joy of the podcast is that in talking to other people, we can create and shape the language and categories that we can all live inside:  little phrases, beautiful little words. Each episode feels like it’s creating a lexicon that I have found infinitely helpful.

Brenda Elsagher finds that comedy can comfort after a cancer diagnosis.