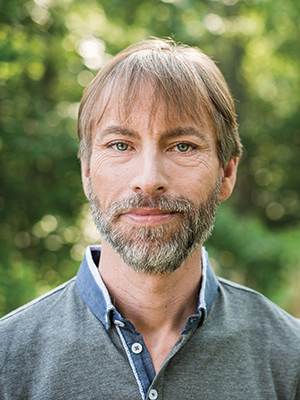 When Tom Marsilje was diagnosed with stage IIIC colorectal cancer in 2012 at age 40, he had been conducting drug discovery research for more than 15 years. The day of his diagnosis, researchers presented data from the first clinical trial in humans of a lung cancer drug he had co-invented, now approved by the U.S. Food and Drug Administration as Zykadia (ceritinib). When Marsilje’s cancer recurred after initial treatment, eventually resulting in a stage IV diagnosis, he started to research clinical trials for his own cancer type.

Marsilje lives in San Diego with his wife and two young daughters and works at a research institute associated with the pharmaceutical company Novartis. He searched for open trials of colorectal cancer treatments on clinicaltrials.gov, a registry maintained by the National Institutes of Health. He got 1,200 results. “I was very intimidated and freaked out because where do you start with 1,200 hits?” he recalls. “I didn’t really fully recognize how intimidating and difficult it is for a patient to find a trial and to successfully enroll in the trial until I switched my viewpoint and became a patient.”

In 2015, Marsilje co-founded the Colontown Clinic, a space within the Facebook community Colontown where a small group of experts posts new clinical trials and clinical trial results and answers questions from patients. About a year later, he began to circulate a spreadsheet listing trials for microsatellite stable (MSS) colorectal cancer, the type he has, and in January 2017, he launched it as a website and phone app. (The vast majority, 85 percent, of colorectal cancers are microsatellite stable, meaning they do not have a certain pattern of genomic instability that can influence treatment plans.) In May 2017, the advocacy organization Fight Colorectal Cancer adopted the resource, launching it as the Late Stage MSS-CRC Trial Finder. Marsilje will continue to consult with the organization on maintaining the trial finder. He has yet to be treated through a clinical trial himself.

Marsilje spoke with Cancer Today about the trial finder and about the challenges for cancer patients of finding and joining clinical trials.

CT: What are barriers that keep cancer patients from being part of a clinical trial even if they are interested?

MARSILJE: The number-one barrier is probably geographic and financial, where [clinical trial participation] is biased toward patients who are near major centers or have larger financial means. The second one is that each trial has a long list of exclusion criteria. The clinical trial system makes it harder than I think scientifically it needs to be to get into the trials. [For example], I was prepared to join a trial, and I had a surprise stage I melanoma diagnosis [which precluded me from joining the trial]. It was surgically cured. It is something that I or my doctors are not medically concerned about whatsoever. The logic is, in an ideal scientific ivory tower, you want to know with 100 percent accuracy if you see a spot on a CT scan that it’s a spot from the cancer you think it is. The system complains about low patient participation rates, but they also have this inherent bias where they want to make things as scientifically ideal as possible, and you can’t match scientific idealism with the real world. A third [barrier] is that it’s very intimidating. It’s difficult for a patient to first get information and then understand the information.

CT: Why did you create your clinical trial finder?

MARSILJE: I thought to myself, if I’m intimidated, [and I’m] someone who does oncology drug discovery, imagine how intimidating [finding a clinical trial] is to a fellow patient who has no scientific background. I started a curated list for my own personal use. Morally and ethically, I decided it was unfair for me to have this advantage of having this scientific background and making my own focused list of trials and not share it with fellow patients.

CT: How do you choose which trials to include in the finder?

MARSILJE: This is not a replacement for one of the big trial finders. It does not show every possible trial. Talking to other patients, the vast majority of us had a similar mindset. Patients are interested in things that, if they do hypothetically work, [will provide] a big benefit. Or they’re looking at trials that have a lower risk of failing. The types of trials that give the highest potential benefit right now are immunotherapies. If they do work, in at least some percentage of patients, they can give a very long duration of action. The types of trials that give a lower risk of failing are trials that have advanced to phase II testing. The type of trial that a patient is least interested in is an unproven phase I trial for a therapy that has, even if it works, a comparatively low potential benefit.

CT: How did you decide what information to supply about each trial to users of the trial finder?

MARSILJE: I’m a part of a lot of message boards online for colorectal cancer patients. They wanted to know geographic location because a large majority of people can’t just drop everything and fly anywhere in the country. A significant number of immunotherapy trials say that you can’t do the trial if you’ve previously been on an immunotherapy. The “prior immunotherapy” column, which specifies whether patients can join a trial if they have already tried an immunotherapy, is, as far as I know, not covered by any other trial finder. Another part of the trial finder is a hyperlink to one or two publications. A patient can go to his or her oncologist with a small list of trials and also bring printouts of medical or scientific literature.

CT: How would someone start a similar resource for another cancer type?

MARSILJE: I see nothing colorectal cancer-specific about the methodology we’re using for this application. This was modeled after what questions and parameters were most important to a colorectal cancer patient. Depending on the cancer type, those key parameters are going to be different. It really takes someone who knows the ins and outs of a cancer type to know what that cancer type’s patient group really is looking for in terms of what they would want to know about a clinical trial. Take a look at what we’re doing in colorectal cancer, and as a patient and a patient activist, see if [it would meet] a need in your type of cancer.