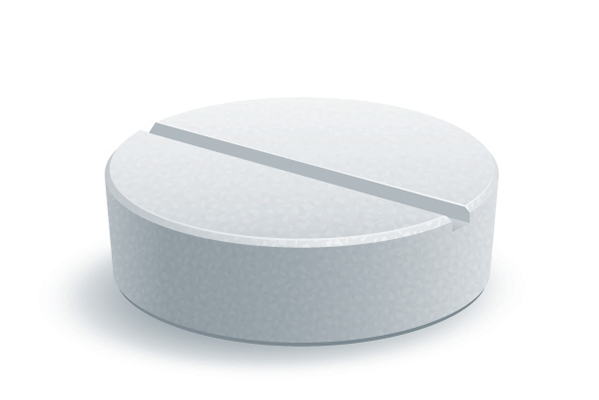 For the first time, the U.S. Preventive Services Task Force has issued a draft recommendation that aspirin be taken for cancer prevention. The recommendation reflects the evidence from a growing body of research on aspirin and colorectal cancer, while taking into account concerns about aspirin’s potential harms.

The USPSTF is an influential panel of experts that makes evidence-based recommendations for clinical care, including cancer screening and use of preventive medicines. The draft recommendation, released Sept. 15, 2015, is limited to adults with or at high risk of developing cardiovascular disease who have a greater than 10 percent chance of having a heart attack or stroke within 10 years. The USPSTF used the American College of Cardiology/American Heart Association risk calculator, which includes factors such as cholesterol, systolic blood pressure and high-density lipoprotein level, to estimate cardiovascular risk.

For high-risk individuals, the USPSTF found that the benefit of taking a daily low-dose aspirin for 10 years to help thwart heart attacks, stroke and colorectal cancer outweighs aspirin’s risks, which include gastrointestinal bleeding and strokes caused by burst blood vessels. Daily aspirin use for individuals who may have a higher than average risk for colorectal cancer but are not at risk for cardiovascular disease is not addressed in the recommendation.

“The scientific evidence for a preventive effect of aspirin is stronger for colorectal cancer than for any other cancer,” says Eric Jacobs, a cancer epidemiologist with the American Cancer Society in Atlanta. “There is clear and consistent evidence from randomized trials as well as from other types of studies that regular long-term aspirin use will lower the risk of developing colorectal cancer.”

It is not known how aspirin prevents colorectal and potentially other cancers. “One possibility is that it may help prevent cancer in the same way that it helps thwart heart attacks, which is by blocking the ‘activation’ of blood platelet cells,” says Jacobs. “This blocking of platelet activation has a variety of effects, some of which may slow cancer. We know that platelets that become activated can release factors that help tumors grow. Activated platelets may also help cancers spread throughout the body.”

Andrew Chan, a gastroenterologist at Massachusetts General Hospital and Harvard Medical School in Boston who co-authored a commentary on the USPSTF guidelines published in the January 2016 Gastroenterology, says other mechanisms may be involved. “Aspirin might also have a direct effect on colorectal tissue and colorectal tumors as well as other types of cells relevant to the development of cancer,” he says.

Researchers have studied aspirin use and cancer risk in many different types of cancers. In 2014, Jacobs published findings in the Journal of Clinical Oncology from a study that looked at aspirin use among men with prostate cancer. The study found that in men with aggressive prostate cancer, daily aspirin use after the cancer diagnosis was associated with a decreased risk of dying from prostate cancer. Randomized trials studying the effect of aspirin in men with high-risk prostate cancer are needed to confirm the findings. One such trial, Add-Aspirin, is underway in the United Kingdom.

An analysis in BMC Cancer, published online Dec. 16, 2015, of the use of non-steroidal anti-inflammatory drugs (NSAIDs) in general and aspirin in particular in the Sister Study, a prospective study of women at high risk for developing breast cancer, found that premenopausal women who took aspirin regularly for at least seven years had a lower risk of developing breast cancer. The association was not seen in postmenopausal women.

“There have been many studies examining aspirin and breast cancer, but the results have not been consistent,” says Sangmi Kim, a cancer epidemiologist at the Medical College of Georgia in Augusta who led the study. “This research raises the intriguing possibility that aspirin might have some preventive benefit for premenopausal women who are at higher risk for breast cancer.”

Individuals should talk to their doctors before starting daily aspirin use, as well as be aware of aspirin’s limitations. “We need to emphasize that [particularly for colon cancer] screening is the most important step you can take for early detection or prevention,” says Chan. “Aspirin is a complement, never a substitute.”