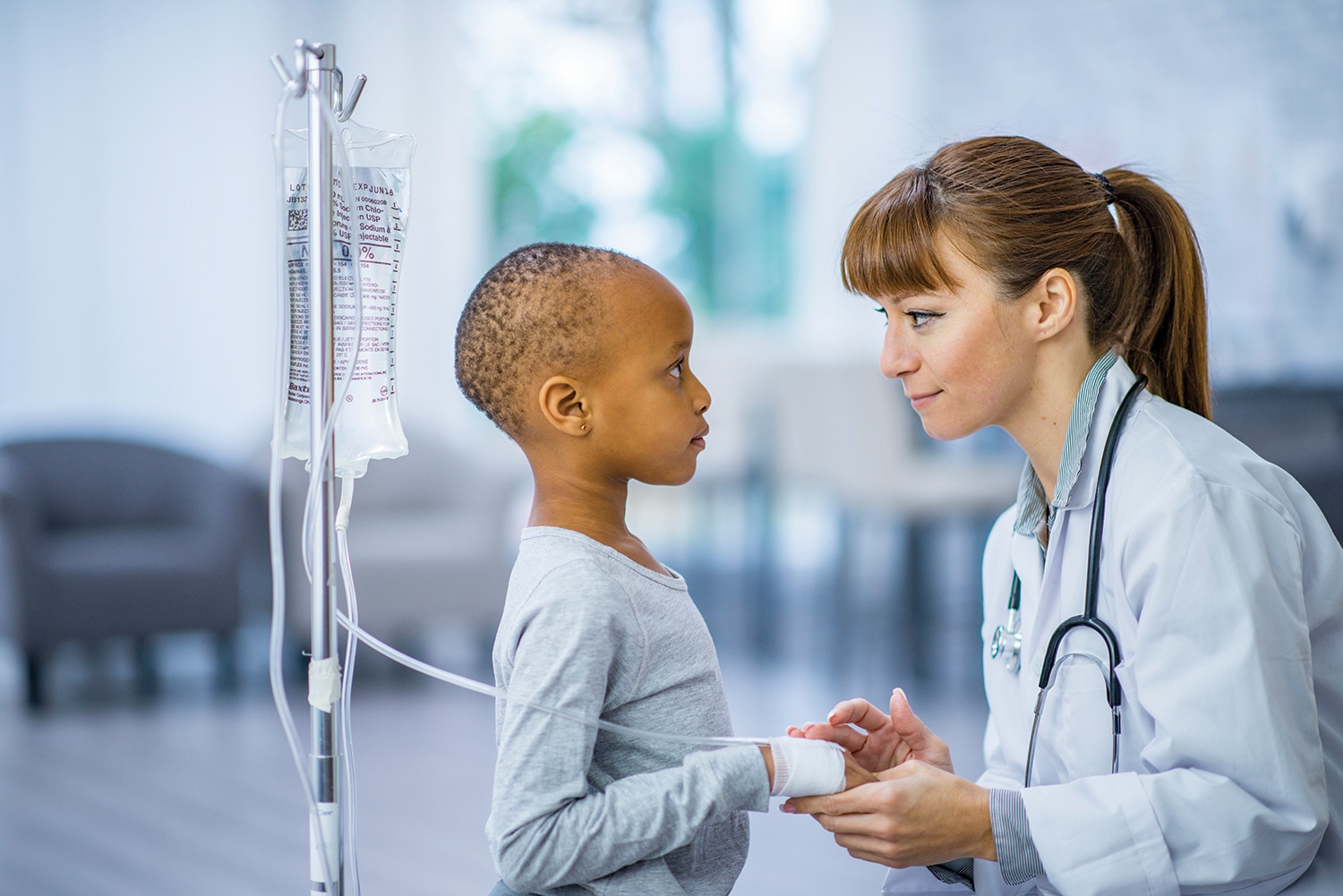 DRUG DEVELOPMENT FOR PEDIATRIC CANCER is a tough sell in the pharmaceutical industry. The market is small—children account for just 1% of all new cancer diagnoses. They develop different cancers than adults. And kids’ growing bodies metabolize and respond to medication differently than the bodies of adults.

As a consequence, most of the cancer therapies that make headlines are approved by the U.S. Food and Drug Administration (FDA) only for adult patients. Between 1997 and 2017, the FDA approved 126 drugs for cancer in adults; only six had an initial approval for use in children. Kids also have less access to clinical trials. A study published in May 2019 in the European Journal of Cancer found that in the past decade, less than 1% of early-phase clinical trials were open to children only, and that it took a median of 6.5 years for a drug to be studied in children after it was tested in a phase I study in adults.

Children with cancer can participate in a pediatric cancer registry.

The Project:EveryChild pediatric cancer registry was established in 2015 to learn more about childhood cancers, including the genetic mutations that drive them. Today, the registry includes data collected from more than 20,000 infants, children, adolescents and young adults in the U.S. diagnosed with cancer before age 25.

The registry is maintained by the Children’s Oncology Group, which organizes clinical trials at more than 200 medical centers in the U.S. and other countries. Doctors can contribute molecular analyses of their pediatric and young adult patients’ tumors and tissue samples, as well as medical records on drug responses and prognoses. Researchers can access the data for studies exploring pediatric cancer prevention, early detection, new treatments and the effects of treatment over time.

Rajen Mody, a pediatric oncologist at the University of Michigan Rogel Cancer Center in Ann Arbor, says he urges all of his patients to contribute to the registry, especially if they have a relatively rare cancer type or are participating in a clinical trial. “It’s extremely important to have access to [data on] all sorts of cancer types, so we [can learn] in which patients a drug is working,” he says.

Vivek Subbiah, an oncologist at the Clinical Center for Targeted Therapy at the University of Texas MD Anderson Cancer Center in Houston, says the data collected in Project:EveryChild creates new opportunities. “If [we find that] there’s a pattern, for example, an abnormal molecular pathway common to a particular type of brain tumor,” he says, “then we can be more proactive [by] screening patients for those mutations.”

The U.S. Research to Accelerate Cures and Equity (RACE) for Children Act, which goes into effect in August 2020, aims to change this scenario. The law mandates that drug companies investigating new drugs for treating adults with cancer must also test those same drugs in younger patients if the cancers share certain molecular targets.

RACE closes a gap in the 2003 Pediatric Research Equity Act, which required pharmaceutical and biotech companies to test certain drugs and biological products in children, but exempted cancer drugs from that mandate. “Pediatric oncology has been an afterthought in drug development,” says Vivek Subbiah, an oncologist at the University of Texas MD Anderson Cancer Center in Houston, who treats both children and adults.

Currently, most children with cancer are treated with chemotherapy. RACE is expected to bring more targeted therapies into pediatric oncology, says Rajen Mody, a pediatric oncologist who oversees early-phase pediatric clinical trials at the University of Michigan Rogel Cancer Center in Ann Arbor. These drugs work by targeting a tumor’s specific genetic mutations and certain molecular pathways that help the tumor grow, and they have fewer side effects than chemotherapy.

The targeted therapy Xalkori (crizotinib) was approved by the FDA in 2016 for adults with non-small cell lung cancer that has an ALK or ROS1 mutation. ALK mutations are also found in anaplastic large cell lymphoma, which accounts for 15% of childhood lymphomas. In 2009, the drug began to be studied in pediatric patients, but it has not yet been approved by the FDA for treatment in children. RACE aims to speed up this process.

To enforce mandates in the RACE legislation, the FDA has developed a list of more than 200 high-priority molecular targets that researchers have already found in pediatric cancers. If a therapy targeted at one of these molecules is being studied in adults, RACE specifies that clinical trials must be started in kids, too, says Mody, who serves on the FDA advisory committee that developed the high-priority list.

Subbiah says he is already seeing age thresholds being lowered for participation in industry-funded clinical trials. “This act may open up doors for pediatric patients,” he says.