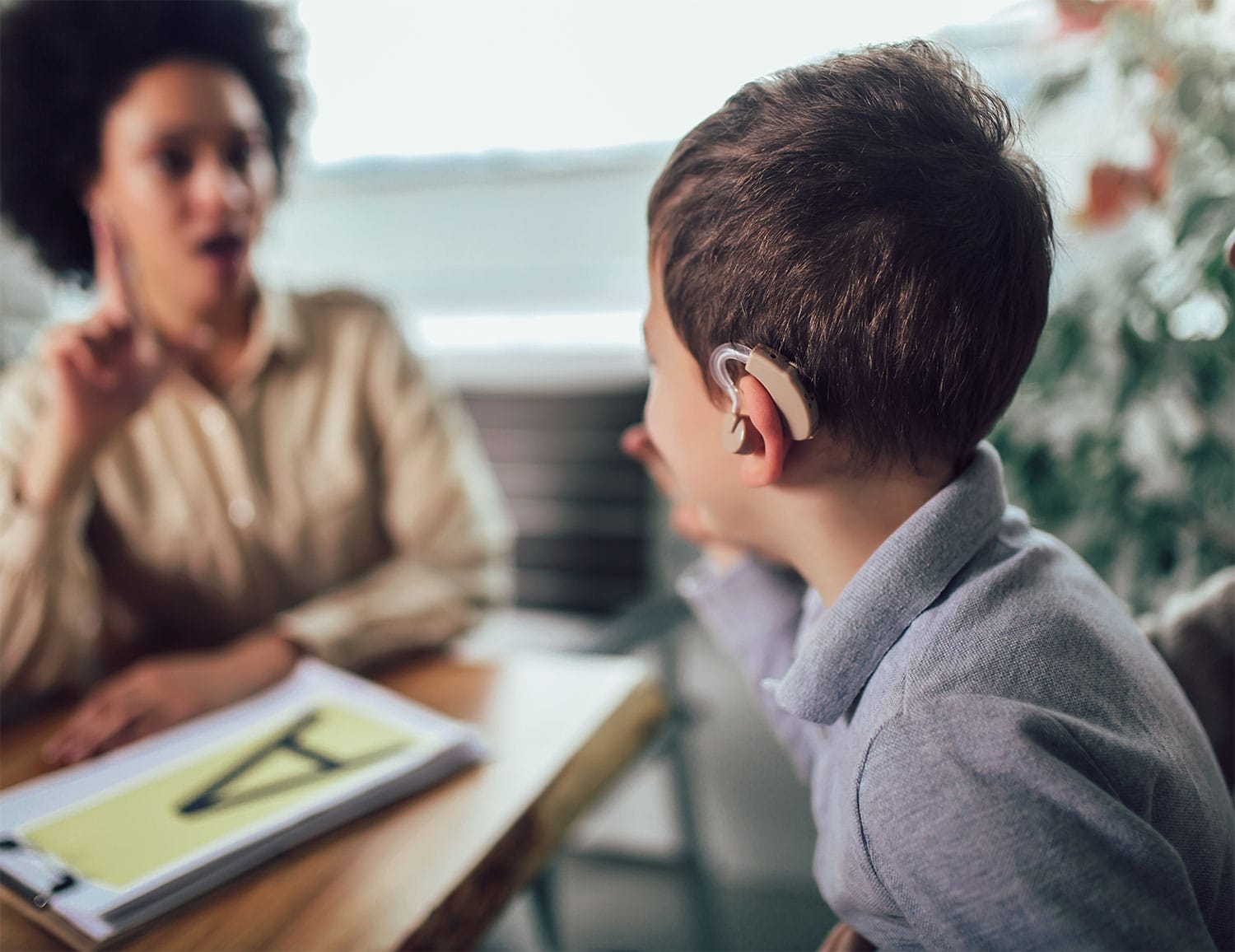 WEEKS BEFORE HER FIFTH BIRTHDAY, Lucy Krull was diagnosed with medulloblastoma, a type of brain tumor. Over an eight-month period, she was treated with radiation and chemotherapy. Two years later, her hearing started to deteriorate. Lucy was fitted with hearing aids, which initially seemed to help. But over time, her hearing continued to decline. By age 12, she’d lost 90% of her hearing in both ears.

“It went so quickly,” recalls her mother, Kate Krull. “It was terrifying to think, ‘How am I going to communicate with my child?'”

The number of children who are treated successfully for cancer has risen dramatically, from about 58% in the mid-1970s to more than 80% today. However, some of the lifesaving treatments kids receive may cause long-term side effects. Hearing loss, for example, affects between 30% and 40% of children with embryonal tumors—cancers that start in the fetal cells in the brain—who are treated with platinum-based chemotherapy and radiation to the skull and spine. Medulloblastoma is the most common type of embryonal tumor. Between 250 and 500 children under the age of 16 in the U.S. are diagnosed with medulloblastoma each year.

Hearing occurs when hair cells in the inner ear send electrical impulses to the brain. Radiation and chemotherapy kill those hair cells. But unlike more obvious side effects, such as a loss of sight or mobility, a decline in hearing can often go unnoticed. “Kids can kind of fake it for a while,” says Heather Conklin, a neuropsychologist at St. Jude Children’s Research Hospital in Memphis, Tennessee. “It takes a while for families to pick up on that.”

In a study published June 20, 2019, in the Journal of Clinical Oncology, Conklin and her colleagues analyzed data on brain function and hearing loss in 260 children and young adults who had participated in a clinical trial launched in 2003 to study two treatment regimens for embryonal tumors. All of the participants had their hearing tested when they entered the study and again up to five years later.

Lucy, who was enrolled in this study, was one of the 64 children who developed severe hearing loss. These children, the study found, were more likely than those with normal hearing or mild-to-moderate hearing loss to develop reading and learning difficulties. Key problem areas included word recognition, reading speed and comprehension. Building on these findings, Conklin and her colleagues at St. Jude’s are now investigating whether physical therapy or online tools that reinforce specific cognitive areas can reduce learning problems caused by cancer treatments.

Administering Ethyol (amifostine), a drug used to prevent side effects from chemotherapy and radiation, can help reduce hearing loss in some children getting treated for embryonal brain tumors. However, doctors have found that the drug doesn’t work well in patients with aggressive cancers who require high-dose radiation.

Krull advises other parents to “be engaged in the process.” She made sure she understood what was happening with Lucy so she could make informed decisions as they met new specialists. “Nobody knows your child the same way you do,” she says. “You can really give a doctor a better understanding of the history and well-being of your child.”

Traci Olivier, a pediatric neuropsychologist at Our Lady of the Lake Children’s Health in Baton Rouge, Louisiana, who was also involved with the study, says that if a child’s hearing starts to decline, parents should make sure that their child wears hearing aids because it will help facilitate learning.

Lucy, now 13, reads at a first-grade level. About a year ago, she was fitted for MRI-compatible cochlear implants, which recently became an option for childhood brain tumor survivors. The implants restore about 70% to 75% of her hearing and allow Lucy to learn by repeating and processing what she is taught verbally. The implants also gave Lucy a whole new social life. “She was shut out,” says Krull. “Now she can engage with her friends, which is what every 13-year-old wants.”