For women diagnosed  with early-stage breast cancer, the standard treatment is a lumpectomy followed by radiation. There are a number of benefits to choosing a lumpectomy over mastectomy, including a shorter recovery period following surgery, the avoidance of lengthy breast reconstruction, and survival odds equal to that of women who have a mastectomy. But there is also a downside: the risk of needing additional surgery if not all of the cancer is removed the first time. 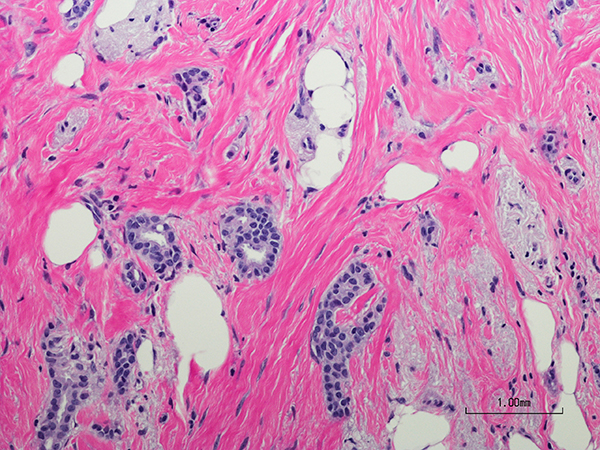 A study published in the August 2015 JAMA Surgery shows that between 1998 and 2011 about 60 percent of women with early-stage breast cancer had a lumpectomy. During a lumpectomy, the surgeon aims to remove the tumor along with a narrow surrounding margin of cancer-free tissue. But surgeons don’t necessarily know whether there is a clean margin until after the surgery. Pathologists make that call by rolling the specimen in special ink and then examining slices of tissue under the microscope to evaluate the distance between cancerous cells and the ink.

Efforts to reduce re-excision surgeries have been underway for some time. Renewed attention was brought to the problem in 2012 following a high-profile study in the Journal of the American Medical Association that showed almost 23 percent of patients undergoing a lumpectomy had a second, third or even fourth surgery. That study also found a wide variation in re-excision rates among surgeons, ranging from zero to 70 percent.

To address the problem, the Society of Surgical Oncology and the American Society for Radiation Oncology crafted new guidelines, which were published in the May 10, 2014, Journal of Clinical Oncology. The new guidelines define a clear margin as “no ink on tumor.” In other words, for most women, any margin of healthy tissue around a tumor is sufficient, no matter how thin. Still, Meena Moran, a radiation oncologist at Yale School of Medicine in New Haven, Connecticut, who helped develop the new guidelines, emphasizes that there remain women at high risk for recurrence for whom surgeons will want to see a wider margin.

Meanwhile, surgeons have been studying other techniques to reduce the need for a second surgery. Anees Chagpar, a surgeon at Yale, recently published research on cavity shaving, a 10-minute procedure that involves taking off an additional thin layer of tissue from the area where the tumor was removed. Her study, published in the Aug. 6, 2015, New England Journal of Medicine, randomly assigned 235 women having a lumpectomy to either cavity shaving or routine surgery. Ten percent of the women who had cavity shaving had a second surgery compared to 21 percent of those who did not.

Other surgeons are bringing tools into the operating room that can help identify tumor margins. Freya Schnabel, a surgical oncologist at NYU Langone Medical Center in New York City, was involved in clinical tests of MarginProbe, a device developed to help surgeons identify positive margins that was approved by the U.S. Food and Drug Administration in 2012. She says the device has reduced the overall re-excision rate in her practice.

Doctors also hope the new tumor margin guidelines will provide reassurance to patients that a thin margin is acceptable. “The vast majority of patients these days are getting radiation followed by [chemotherapy or hormone therapy],” says Moran. As a result, the number of women who have a recurrence in the breast is “already really, really low. And because outcomes are excellent, there’s no need to chase margins.”