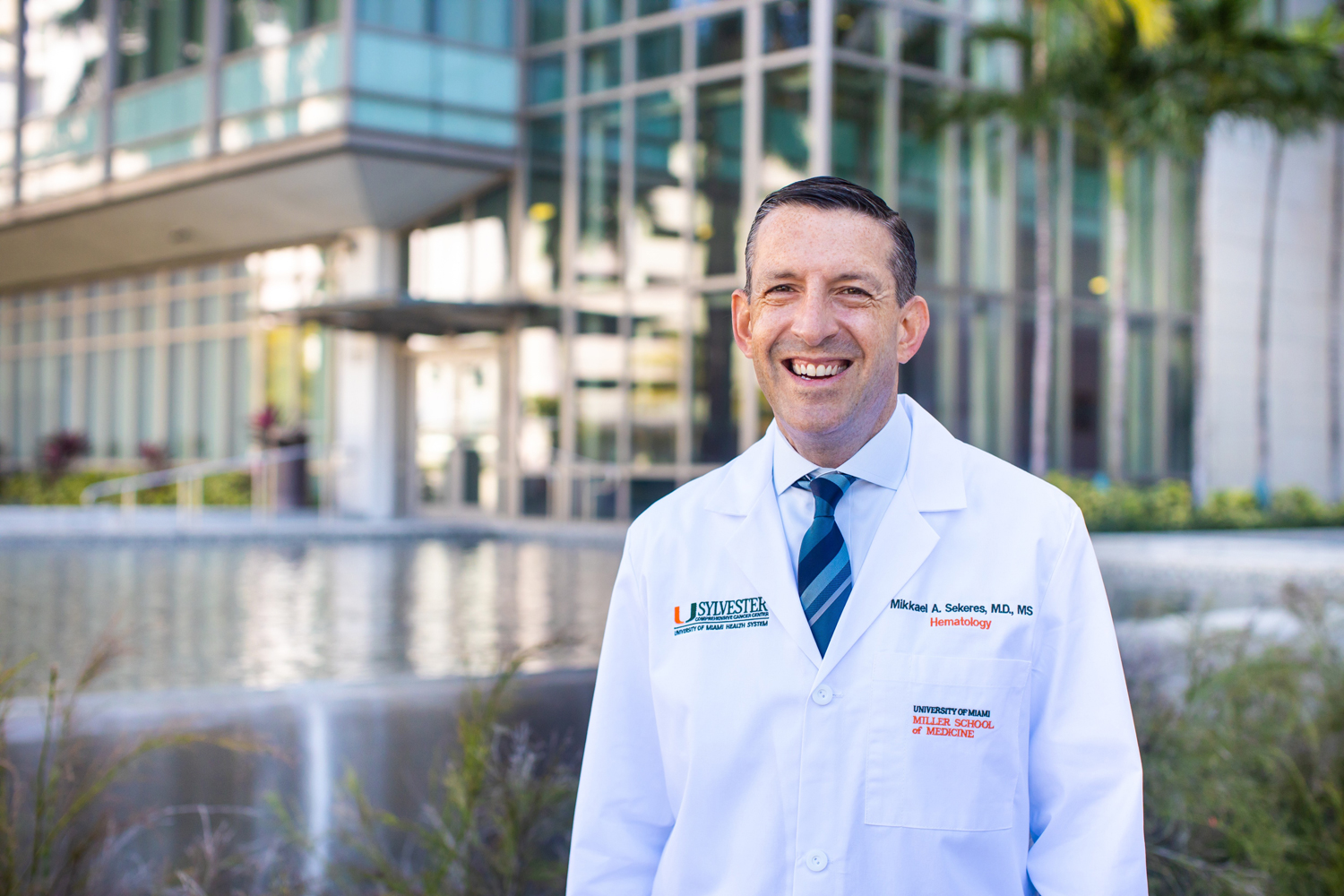 AS A HEMATOLOGIST-ONCOLOGIST WHO PRIDES himself on being straightforward when he discusses treatment benefits and risks with his patients, Mikkael A. Sekeres sees communication as a universal touchstone for connection, knowledge and personal agency.

Sekeres, chief of hematology at the Sylvester Comprehensive Cancer Center at the University of Miami Health System, says he went into medicine anticipating one of his most important roles would be explaining complex scientific terms in ways that his patients would understand so they could feel empowered about their own care.

Sekeres uses his talent for translating complex information to weigh the merits and criticisms of the Food and Drug Administration (FDA) in his latest book, Drugs and the FDA: Safety, Efficacy, and the Public’s Trust. Sekeres describes his time serving on the FDA advisory committee that voted in 2011 to withdraw approval of Avastin (bevacizumab) as a treatment for metastatic breast cancer.

Through March 21, we will be discussing Drugs and the FDA: Safety, Efficacy, and the Public’s Trust in our online book group.

In the book, Sekeres notes he had previously served on the Oncology Drugs Advisory Committee (ODAC), a panel that reviews evidence and recommends to the FDA commissioner whether drugs should be approved or not without much fanfare. But this time, the process was different. Sekeres describes how police were onsite at FDA headquarters in Silver Spring, Maryland, as pro-Avastin patient advocates stood outside the building holding signs about preserving drug choice. A room typically only a quarter full was now standing room only, packed with reporters and people with metastatic breast cancer testifying passionately to keep Avastin on the market.

“That experience has always kind of sat with me, the question whether this was the ultimate demonstration of how well the FDA works or how it doesn’t work,” says Sekeres.

The FDA approved Avastin in 2008 under an accelerated approval mechanism. Instead of using traditional measures of drug effectiveness like overall survival, the accelerated approval process allows drug companies that design trials to use surrogate endpoints—interim markers that are likely to predict clinical benefit. These trials take less time to complete and enroll fewer people than traditional clinical trials, in hopes that they speed potentially lifesaving drugs to patients with serious diseases.

Avastin initially gained FDA approval on data from a surrogate endpoint called progression-free survival (PFS), which is the length of time a patient lives after starting treatment without their disease progressing. In the initial trial, adding Avastin to chemotherapy for patients with breast cancer resulted in a 5.9-month PFS improvement compared to chemotherapy alone, despite both groups of patients having similar overall survival rates. But findings from Avastin’s two confirmatory trials—trials required as a condition of the accelerated approval program—showed adding Avastin to chemotherapy resulted in fewer months of PFS than indicated in the original trial. In addition, patients who took Avastin showed no improvement in overall survival and experienced more adverse effects compared with chemotherapy alone.

Sekeres recently spoke with Cancer Today about his experience voting to revoke Avastin’s approval for breast cancer treatment and how communication around accelerated approvals could be improved.

CT: What motivated you to write this book about the FDA?

SEKERES: I have always been surprised that nobody wrote a book about the Avastin hearing. It was such a remarkable occurrence. A drug was approved under the accelerated approval mechanism. That wasn’t novel; that had been happening since 1992. Then, a confirmatory study didn’t actually confirm the initial findings of the study. Well, that’s not new either. But, in the past, the FDA has turned to manufacturers and told them to withdraw the drug from the market—which the manufacturers had done dutifully. But for the very first time, a company said, “No, we’re not going to do that, and this is going to go to a trial, and it’s going to be a very public trial.”

CT: You weave in details of the ODAC hearing to review Avastin for breast cancer. Can you talk a bit about that?

SEKERES: It really was like a scene out of a movie. We stayed in a dumpy little hotel. We’re taken in a shuttle to the FDA headquarters. You see hordes of people protesting in front of the main entrance. We’re squirreled away to a side entrance we’ve never been to before. We go through security and are greeted with chaos. This is unfolding in a room that is just packed to the gills with people, scrums of cameramen and reporters around where we usually sit. With all that, you then have the drama of the FDA’s attorneys facing off against Genentech attorneys and over 30 people coming to the microphone to testify either for or against this drug. It was a remarkable, remarkable occurrence.

CT: Why is this topic important and relevant for cancer treatment today?

SEKERES: Over the past few years, we’ve seen this juggernaut of FDA approvals using the accelerated approval mechanism. Drug after drug has come to the market under accelerated approval in non-randomized trials. As hematologists-oncologists, we’re then faced with talking to our patients about these drugs that have been approved—not based on results of trials in thousands of patients, but results of trials in dozens of patients. We then have to try to explain that the drug was approved based on an interim marker and that we’re still waiting to see whether or not a larger trial is going to confirm whether it’s clinically meaningful to patients.

CT: Does accelerated approval erode consumer confidence in the FDA or is that just a necessary evil in getting drugs to market more quickly?

SEKERES: When a drug is approved, you have to weigh the relative balance of safety and efficacy, but a third core principle of this is the public’s trust, which is a key aspect of the book. Does the public trust the FDA? … I do think that when the FDA approves a drug and then withdraws that approval, it compromises the public’s trust, but not because the decision is wrong to approve the drug through this mechanism. I think the communication around accelerated approval has been poor.

CT: What can be done to improve communication?

SEKERES: I would advise the messaging around accelerated approvals to have more of a cautionary tone. I think it’s OK to say this drug has received accelerated approval, but then have a big fat asterisk that says what that means: that we think that this is an important drug to get to patients, and the data on the balance of safety and efficacy warrants you trying it. But remember, it hasn’t been approved using as much data as we typically require for drugs, and we’re waiting for another trial to demonstrate definitively that it has the right balance of safety and efficacy. But there are no asterisks, and that isn’t the kind of messaging we get. The messaging we receive is the FDA approved another drug.

CT: What advice would you give to patients?

SEKERES: I guess I’d reframe that because I think it’s on doctors and nurses to make that distinction between drugs that received full approval and those that received accelerated approval, and to be able to communicate what it means—that it’s based on an interim marker benefit as opposed to a clinically meaningful benefit. You know the catchphrase that is used about the FDA is that it approves drugs based on “lives longer or lives better.” I guess if I were a patient and a doctor recommended the drug for me, I would ask whether I will live longer or live better on the drug.