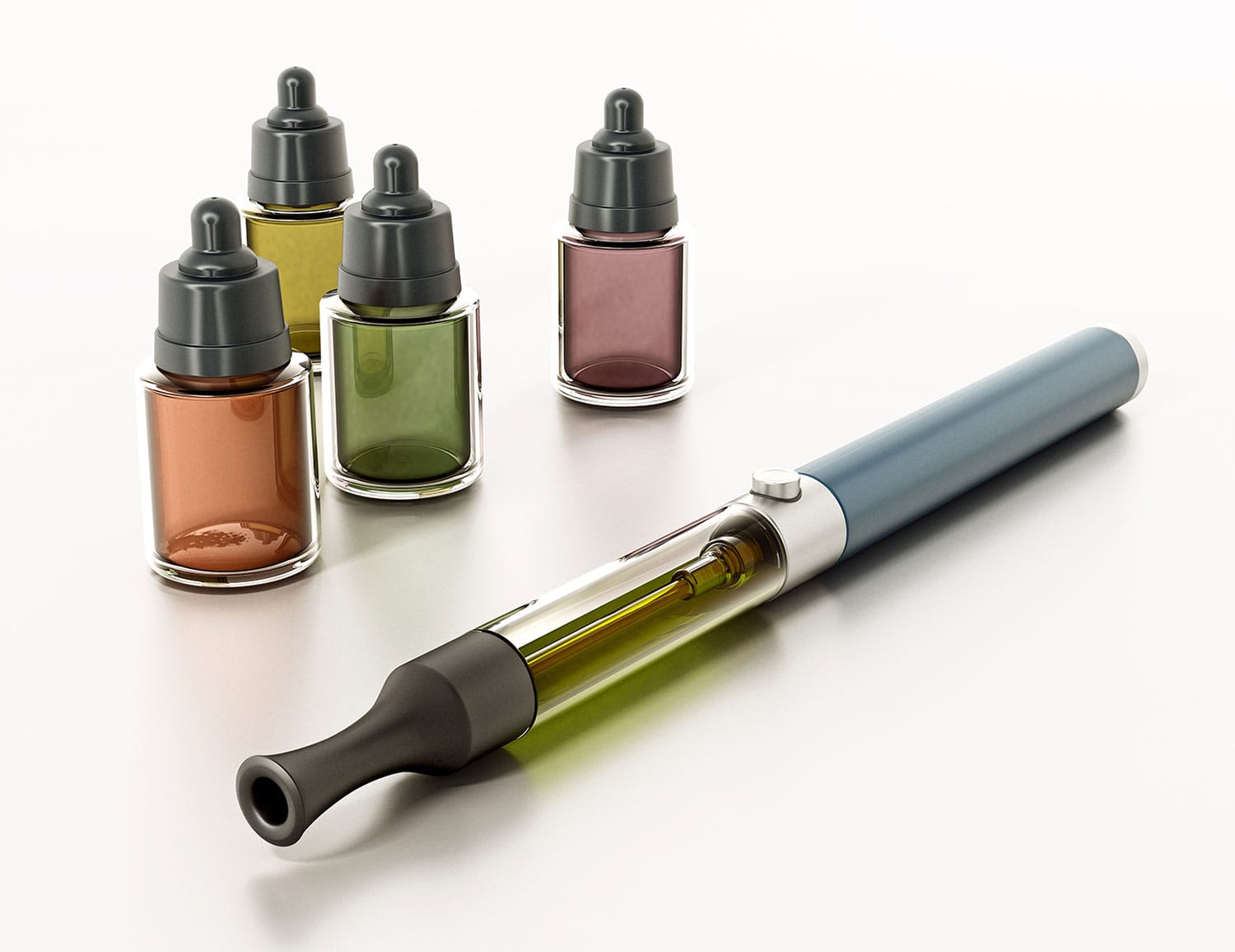 JUUL AND OTHER E-CIGARETTE MANUFACTURERS promote their products as a way to help smokers quit conventional cigarettes. However, e-cigarettes are currently not approved by the U.S. Food and Drug Administration (FDA) for smoking cessation, or any other purpose. Manufacturers have until May 2020 to provide proof to the FDA that their products have a health benefit. If they don’t comply, or if the FDA determines they don’t show sufficient proof the devices are effective for smoking cessation, the products may be pulled from the market.

E-cigarettes are commonly believed to have a lower risk profile than conventional cigarettes. But because they have only been on the U.S. market since 2007, there is very little data on their long-term safety and effects. “E-cigarette aerosol generally contains fewer toxic chemicals than the deadly mix of 7,000 chemicals in smoke from regular cigarettes,” says Brian King, an epidemiologist at the U.S. Centers for Disease Control and Prevention Office on Smoking and Health in Atlanta. “However, aerosol is not harmless. It can contain harmful and potentially harmful substances, including nicotine, heavy metals like lead, volatile organic compounds and cancer-causing agents.”

Regular cigarettes cause cancer after decades of smoking, notes Panagis Galiatsatos, a pulmonologist and tobacco addiction specialist at Johns Hopkins School of Medicine in Baltimore. But no one knows what the full effects of decades of vaping will be. “I don’t view as safer,” he says. “They just pose a different risk than combustible cigarettes, and what that risk is, time will tell.”

In June 2019, doctors began reporting cases of young people with a cough, chest pain and shortness of breath, often accompanied by nausea and stomach pain—with an unknown cause.

Epidemiologists connected these cases in August, and in October the U.S. Centers for Disease Control and Prevention named the condition EVALI (e-cigarette, or vaping, product lung injury). Most EVALI cases have been diagnosed in people who use vaping products containing THC, the psychoactive ingredient in cannabis. By November, lab tests of vaping products and analyses of lung fluid from patients had identified vitamin E acetate, an oil often used in cannabis vaping liquids sold on the black market, as a likely culprit. However, experts caution that because these liquids contain a variety of substances from many sources, there may be multiple factors.

Cases have now been reported in all 50 states, as well as the District of Columbia, Puerto Rico and the U.S. Virgin Islands. As of Feb. 4, 2020, more than 2,700 people throughout the U.S. had been diagnosed with EVALI and 64 had died. Two-thirds of people have been men, and have been younger than 35.

The outbreak has revealed potholes in the system of regulations around e-cigarettes, vaping and THC, says David Hammond, a public health researcher at the University of Waterloo in Ontario.

“One of the big challenges with EVALI cases is that vaping is a new phenomenon,” says Hammond. “This is a tragic reminder about excess risk due to contaminants in the manufacturing process.”

Studies looking at the use of e-cigarettes for smoking cessation have had mixed results. In one study, researchers randomly assigned 886 smokers in the U.K. looking to quit to get either an starter pack or a nicotine replacement product. The findings, published Feb. 14, 2019, in the New England Journal of Medicine, showed that at one year, about 10% of those using a nicotine replacement product had quit smoking compared to 18% of those who got the starter kit.

However, 25% of those who got the e-cigarette starter kit reported they were now smoking both conventional and e-cigarettes. “Dual users were smoking less and taking in less toxins than those who only smoked, so in this context, dual use was beneficial,” says Peter Hajek, a clinical psychologist at Queen Mary University of London who led the study.

But others say dual use might not be the right goal. “In order for adult smokers to achieve any meaningful health benefits from they would need to fully switch to e-cigarettes and stop smoking cigarettes completely,” says King.

Studies have also found that it is not adults but teens—many of whom have never smoked cigarettes—who use these products most. The American Lung Association estimates that about 5,700 teens start vaping every day. Survey results published Nov. 5, 2019, in JAMA found that more than 25% of high school students used e-cigarettes at least monthly, compared to 3% of adults.

E-cigarettes may be even more difficult to quit than regular cigarettes. Studies have found that in some the level of nicotine, the addictive chemical in tobacco, is much higher than that found in traditional cigarettes. Galiatsatos says he has found the teens he treats for bronchitis and asthma at the Johns Hopkins Tobacco Treatment Clinic find it very difficult to quit vaping.

If e-cigarettes are going to be useful as smoking cessation tools, they have to help people quit without drawing new smokers. And that’s a colossal challenge, says public health researcher David Hammond at the University of Waterloo in Ontario. “Our priority has to be to clean up this market and to identify these products as something that a smoker can use to quit, instead of a 15-year-old going off to a party.”