Brenda K. Edwards, a biostatistician and the senior advisor for cancer surveillance at the National Cancer Institute in Bethesda, Md., says the continuing overall decline is reassuring, especially the drop in lung cancer death rates, which she and other researchers attribute to decreased cigarette smoking. 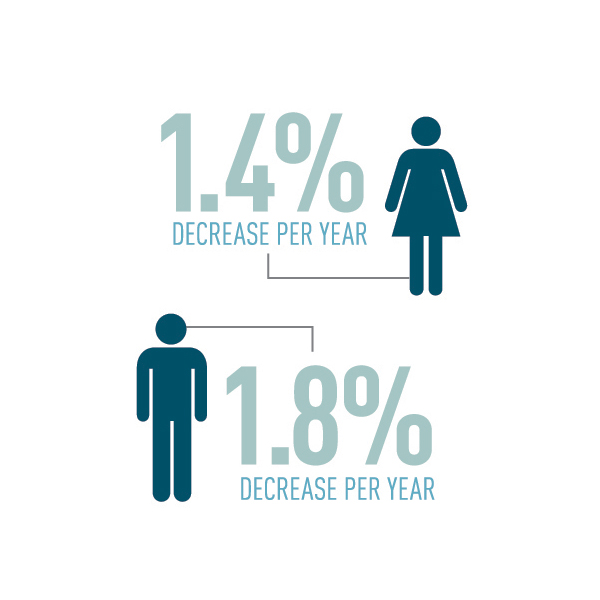 However, the overall picture was not reflected in every type of cancer, says Edwards, the report’s lead author. For example, death rates for pancreatic and liver cancers increased in both women and men. In addition, in women, death rates from uterine cancer rose, as did the death rates in men for melanoma and cancers of the soft tissue (fat, muscle, nerves, blood vessels, and deep skin or fibrous tissue).

The new report discusses the relationship between cancer care and comorbidities—life-threatening illnesses in addition to cancer that patients may have. Statistics show that more than 30 percent of newly diagnosed cancer patients age 65 and over have already been diagnosed with a chronic disease.

“If you are diagnosed with cancer and have some other serious health condition, like heart disease,” Edwards says, “that’s going to affect how you balance your treatment options. Sometimes, these other diseases may be more important to consider than the cancer itself.”

The American Cancer Society (ACS) published its own review of cancer statistics in the January/February issue of CA: A Cancer Journal for Clinicians. Looking forward, this report estimates that more than 1.66 million people will be diagnosed with cancer in the U.S. in 2014 and more than 585,000 will die from the disease.

Rebecca Siegel, an epidemiologist and the lead author of the ACS report, says studying cancer trends is important because it can show areas of progress as well as spotlight those that need more attention. For example, although lung cancer death rates decreased overall, African-American men still die at a much higher rate from lung cancer than men of other races. Smoking and lung cancer rates are also higher in people in lower socioeconomic classes.

“We need to keep doing what we’re doing, but we [also] need to expand our [educational] reach into those populations that are disadvantaged,” Siegel says.