The editors share some of the top stories reported in Cancer Today in the past year. 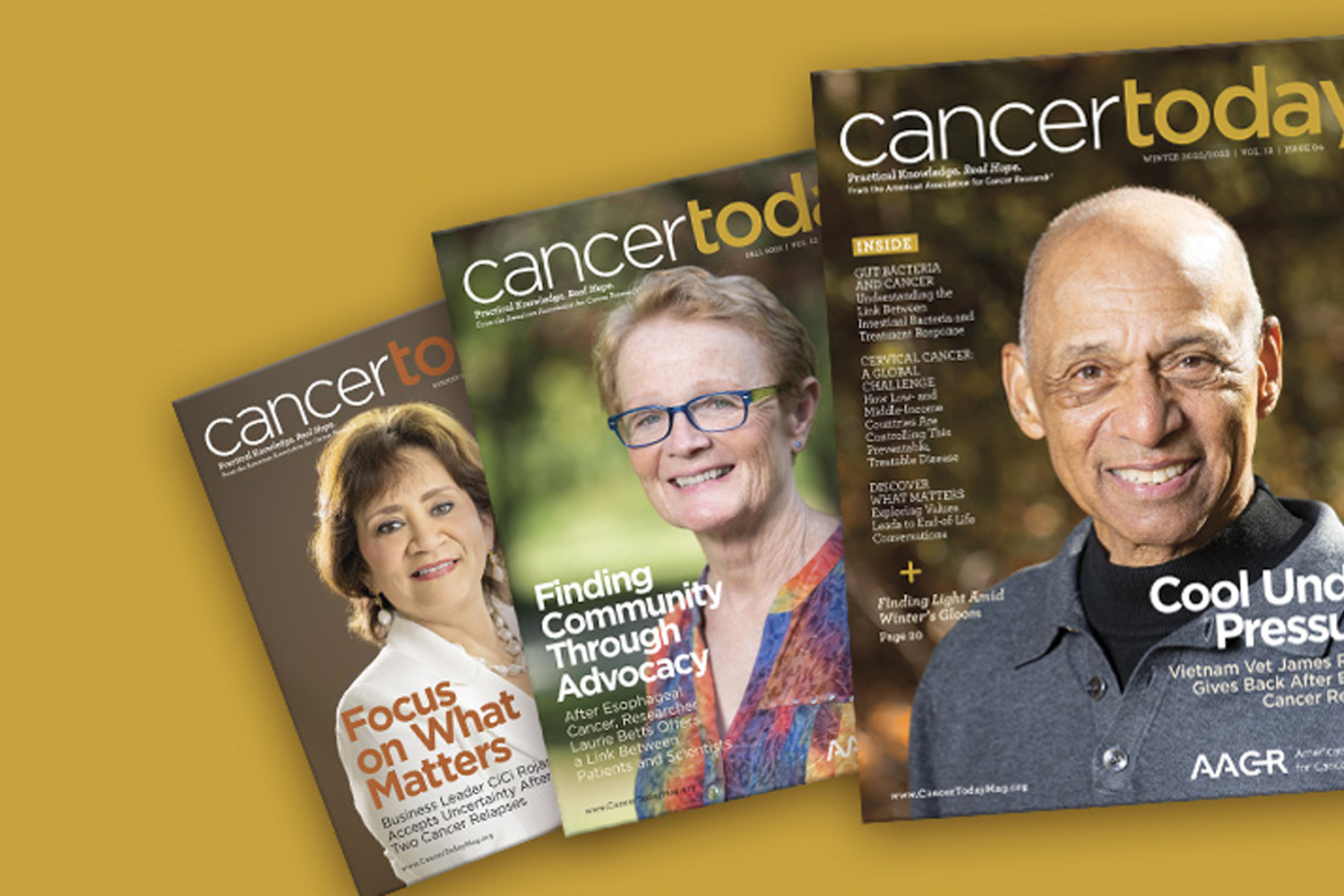 EVERY YEAR, CANCER TODAY SEEKS TO BRING you noteworthy stories about the experience of cancer—including new treatments, advances in research, explorations of side effects and the powerful personal stories of cancer survivors. As we get ready to celebrate the new year, we wanted to share some of the most powerful and interesting stories from Cancer Today in 2022, from chemo brain to a major-league comeback to the mysteries of the gut microbiome.

Cancer-related cognitive impairment (CRCI), known popularly as chemo brain, has long frustrated cancer patients. Symptoms come in many forms—forgetfulness, difficulty with multitasking, struggling to focus—and for years people complained that their side effects weren’t taken seriously. Though recent years have brought greater attention to this phenomenon, progress has not come quickly. “With more survivors, which is wonderful, there are more people living with the effects of treatment who want to understand how to live their best lives and move forward with their goals, even in the midst of experiencing cognitive issues,” said Natalie Kelly, a neuropsychologist at City of Hope Comprehensive Cancer Center. In this story from our spring issue, Stephen Ornes explores our current understanding of CRCI: How it manifests itself, some potential causes and treatments, and techniques to manage symptoms now.

A cancer diagnosis can impact mental and emotional health, from direct effects on mood and anxiety to additional stress from the extra burden on finances. Pamela Rafalow Grossman reported on two studies on mental health after a cancer diagnosis that found psychiatric issues tend to increase even as people complete treatment and that the risk for suicide is higher in people with cancer than in the general population. Alexis Schneider, the founding director of Lotus Life Counseling, told Grossman that it’s common to believe recovery ends when a person stops reporting for medical treatment. “But treatment is just the start of the healing. It needs to be emphasized that cancer treatment is only a small sliver of cancer recovery.”

Senior editor Marci A. Landsmann profiled professional baseball player Connor Joe who, after five years of trying to establish a career in the major leagues, was diagnosed with testicular cancer in February 2020. One year after Joe was told there was no more sign of cancer, he hit his first major-league home run. But getting there, from finding a doctor and going through treatment and recovery, required Joe to lean on the determination that kept him fighting for a spot on a major-league roster. “Minor leagues in baseball are not glamorous, and the lingo thrown around is we’re just grinding, trying to get to the big leagues,” Joe says. “So, it’s funny, but when I got diagnosed, it’s like I just thought, ‘All right, well, I’m going to grind through it.’ That was my motto.”

Drinking alcohol has been linked to an increased risk of at least seven types of cancer, but there is more to learn about how to control your risk and how much you can change it. In a study of more than 4.5 million people over the age of 40 in the Korean National Health Insurance Service, researchers sought to learn what impact a person could have on their cancer risk by changing their existing behaviors. Teresa Bergen reported on the findings that showed people could change their risk. People whose drinking went down between 2009 and 2011 were found to have a lower risk of cancer compared with those whose drinking continued at the same level. For people whose drinking increased, their risk for cancer also rose compared with those who stayed at the same level. “It is surprising that changes in drinking over a two-year period were sufficient to predict whether the risk of cancer increased or decreased in the following six years, but it may be due to the fact that the sample size was so large,” said George F. Koob, director of the National Institute on Alcohol Abuse and Alcoholism.

In research, scientists try to limit the number of conditions and factors that could complicate the effects they observe from a cancer treatment being studied. But for most people in cancer treatment, comorbidity—having one or more other health conditions—is common. “When a patient is diagnosed with cancer and they first walk in the door, this may not be their first interaction and should not be their first interaction with the medical system,” Andrew H. Lipsky, a hematologist-oncologist at Columbia University Medical Center told editor Eric Fitzsimmons. “They have been living their life; they have been seen by a primary care doctor.” This story looked into how doctors and patients balance treatment decisions and how research in chronic lymphocytic leukemia is looking at ways to better standardize how we understand and manage comorbidity.

Medicaid is a lifeline for many people with cancer who struggle financially, but the rules for how it is administered are different for each state, with a number of states still opting not to expand coverage to low-income adults through the Patient Protection and Affordable Care Act. In this article, Sharon Tregaskis explores how some Medicaid programs offer support to people with cancer, and what you can do to learn about the program in your state. “It’s OK to be on Medicaid and not have a heroic story, to take the resources that are there for you.” said Milly Daniels, who was covered by Oklahoma’s Medicaid program when she was diagnosed with breast cancer at 23 years old.

The past few years have brought a groundswell of new cancer treatments. The word “breakthrough” has been attached to many of these treatments, but not always with the level of rigor one might expect. A March study in JAMA Network Open examined new drug approvals from the Food and Drug Administration between 2016 and 2021 and found that only 14% were breakthroughs—new treatments that replaced an existing standard of care. Many of the others were either added on to existing treatments or approved for later lines of treatment in advanced cancer. Jon Kelvey wrote about the findings and what challenges face researchers as they try to find more effective and less toxic treatments. “Our study shows that breakthroughs in cancer treatments still remain rare,” hematologic oncologist and lead author of the study David Benjamin said. They take “many years of drug development and the basic science [takes time] also—we’re learning every day about how cancer works.”

Progress against cervical cancer has been boosted in recent years with the development of the HPV vaccine and screening that can catch cervical cancer when treatment is most likely to be successful, but the benefits of these advances have not been seen equally. Black and Hispanic women are more likely to be diagnosed at a later stage, and Black women are 65% more likely to die of the disease than white women. This article by Natalie Slivinski explored the disparities, their causes and what can be done about them. “Any time you diagnose cervical cancer, that’s a potential missed opportunity of prevention,” said epidemiologist Mary C. White from the Centers for Disease Control and Prevention and a lead author of the 2019 study. “So, we’re looking at potential failures of screening when [we see] these cancers being diagnosed at regional or distant stages.”

Caught in the Middle

In this article, Cameron Walker explored the world of adolescents and young adults, or AYAs, who are often overlooked in the cancer care system that focuses on older adults, who are the most likely to get cancer, and children, who require different care. This can put AYAs in an awkward place, both figuratively in making treatment decisions from data about different populations and sometimes literally as they sit in pediatric exam rooms lined with cartoons and toys. These patients “are often shuffled between different cancer centers because no one knows what to do with them,” Caitlyn Barrett, the senior director of research and programs at CureSearch said. But some organizations and cancer centers are looking to provide better information and care for this underserved group.

A surprising recent direction for research has been understanding the ecosystem of microorganisms living in our digestive system and the role they play in our health. This system of microbes helps the body break down food and plays an important role in our immune system. Natalie Slivinski wrote about how the “microbiome” may affect how people with cancer respond to treatment with immunotherapy. “When you have a diverse, healthy gut microbiome, it actually helps create the T cells that are ready to fight cancer,” said Saranya Chumsri, a breast oncologist at the Mayo Clinic in Jacksonville, Florida.

The editors share some of the top stories reported in Cancer Today in the past year.