The Many Faces of Patient Advocacy

Advocates shared their stories and projects at the AACR Annual Meeting. 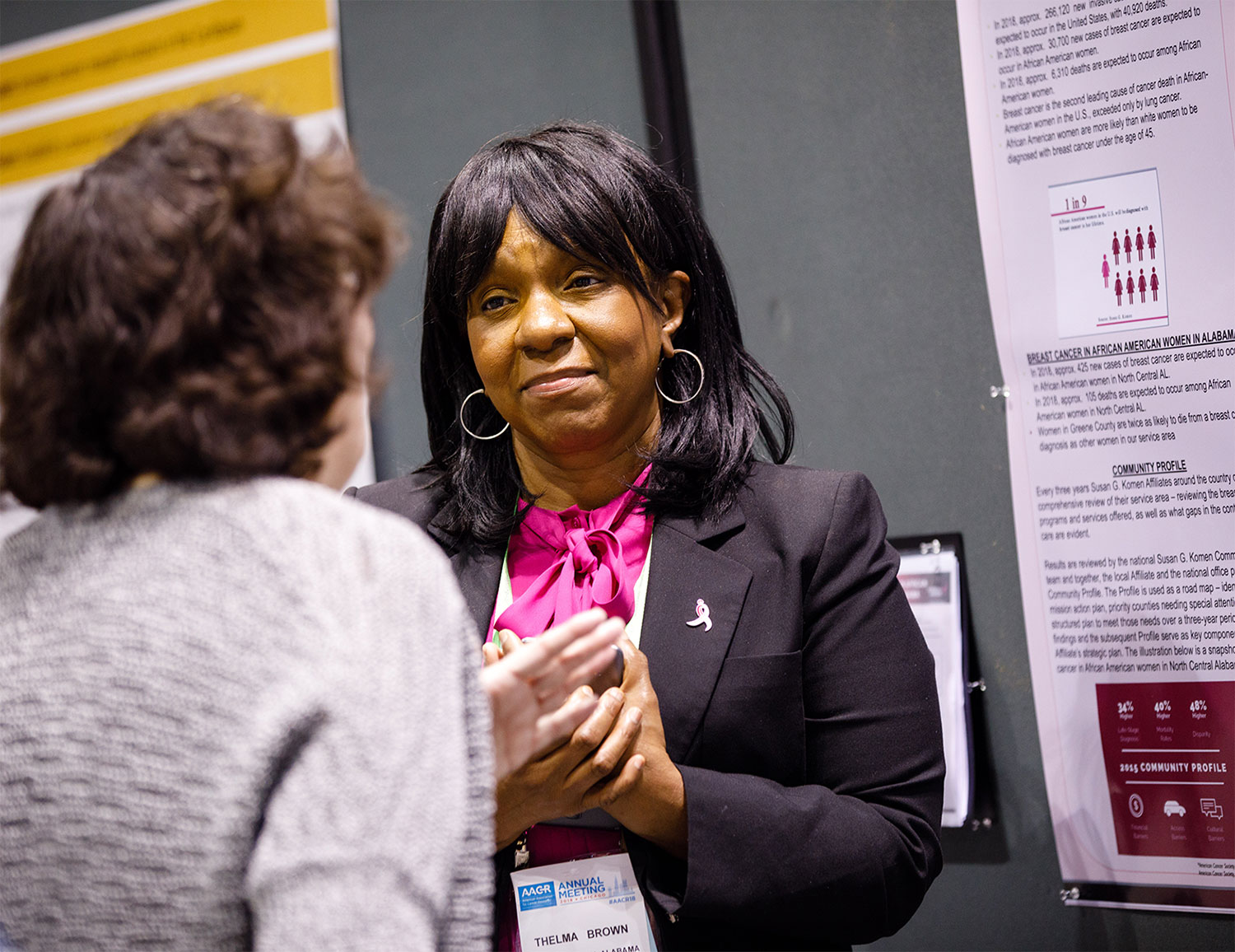 PATIENT ADVOCACY TAKES ON MANY FORMS—and its many faces were reflected at the American Association for Cancer Research (AACR) Annual Meeting 2018, held in Chicago, April 14-18.

Each year, the Scientist↔Survivor Program (SSP) brings between 30 and 40 advocates—including patients, survivors, caregivers and others—to the scientific meeting for an immersive learning experience. As one part of the program, participants detail information related to their advocacy efforts in poster presentations, alongside the posters of cancer researchers attending the meeting.

The SSP posters, presented April 16 and 17, covered topics including advocating for research, educating patients and community members, strengthening communication between doctors and patients, and providing support to others at cancer centers or online.

Thelma Brown, a breast cancer survivor and volunteer for Susan G. Komen in North Central Alabama, presented on her chapter’s efforts to address disparities, explaining that in Alabama, African-American women are both more likely to be diagnosed with breast cancer and to die from the disease than women of other ethnicities. Her chapter provides a wide variety of services, including transportation assistance and meet-ups for walks combined with educational talks. “Disparities is such a big issue. What we have to do is break it down in sections and just knock away at it a little at a time,” she said, explaining that access to care, unhealthy lifestyle and tumor biology all contribute to disparities.

Kimberly Badal, a molecular genetics PhD student studying breast cancer and living in Trinidad, spoke of her shock at learning of the high mortality rates from cancer in the Caribbean. She founded the Caribbean Cancer Research Initiative to improve cancer research infrastructure in the region. The organization is developing a patient navigation program that will use oncology nurses to help guide patients through their treatment.

Other patient advocates use their experiences with cancer to try to effect public policy change and increase research funding. Beth Anne Baber of San Diego, for example, spoke of her efforts to gain Department of Defense research funding for pediatric, adolescent and young adult cancers. She became an advocate after her now-teenage son was diagnosed with neuroblastoma in 2005. 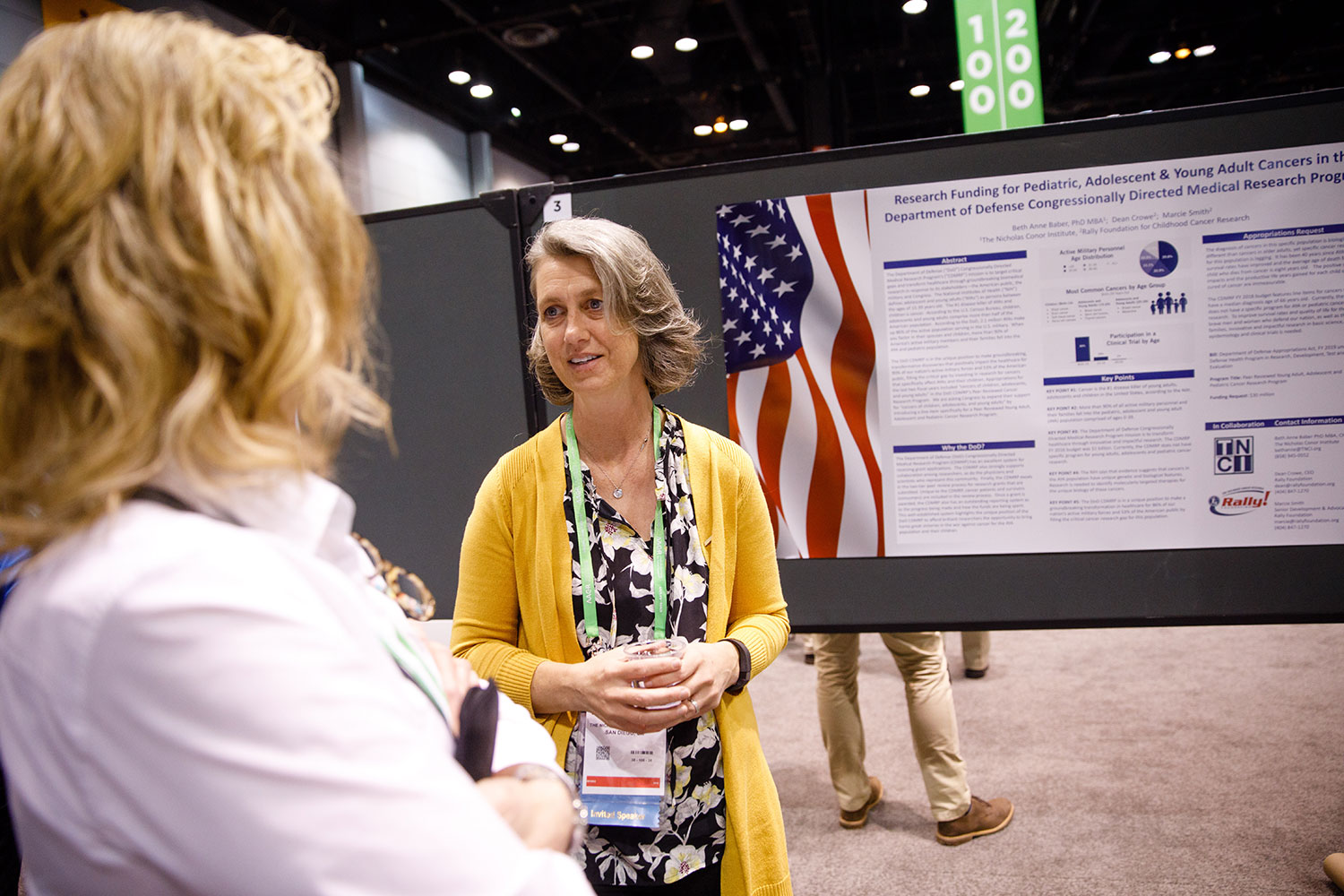 Beth Anne​ Baber contributed a poster about research funding as part of the Scientist↔Survivor Program​ at the AACR Annual Meeting 2018. Photo by © AACR/Scott Morgan 2018​

Many advocates presenting posters discussed the ways in which social media has become a vehicle to draw patients together, increase awareness of issues and raise visibility of their efforts in the research community.

Social media has also helped forge connections between patients with rare cancers or cancer subtypes, said Lisa Goldman, who was diagnosed with stage IV lung cancer in 2014. After she learned that her tumor tested positive for a mutation in the gene ROS1, she helped start a Facebook group that now includes more than 200 members with this rare mutation. One project that arose out of the group allows patients whose tumors have ROS1 mutations to send tumor samples to partnering researchers so they can create cell lines and mouse models.

Rebecca Esparza, a survivor of a rare form of ovarian cancer called germ cell ovarian cancer, also started a Facebook group for people who share her diagnosis. Her experiences learning from fellow advocates have motivated her to do more. “Thanks to events like this, this has put the bug in my ear that perhaps it’s time for me to go ahead and set up a foundation, get a good website up,” she said. “There’s still not any kind of organization that’s dedicated to germ cell ovarian [cancer].”

The placement of the advocate posters alongside the scientific ones at the meeting allowed SSP participants to meet and present their work to scientists and for collaborations to form, said K​aren Russell, who coordinates the program for the AACR.

Advocates who participate in the SSP aren’t the only ones to be inspired. “The scientists learn a lot about cancer by coming and talking to these advocates at their posters,” said Anna D. Barker, SSP chairperson. Barker is also director of the National Biomarker Development Alliance, director of Transformative Healthcare Knowledge Networks, co-director of Complex Adaptive Systems and a professor in the School of Life Sciences at Arizona State University in Tempe.

Cancer research “has to be a unified effort” that includes both patients and scientists, said Barker. “These communities don’t understand each other, and so when they do, it’s really magic.”