Brain cancer survivor Lanette Veres sends cards and packages to others with the disease. She believes no one should face cancer alone. 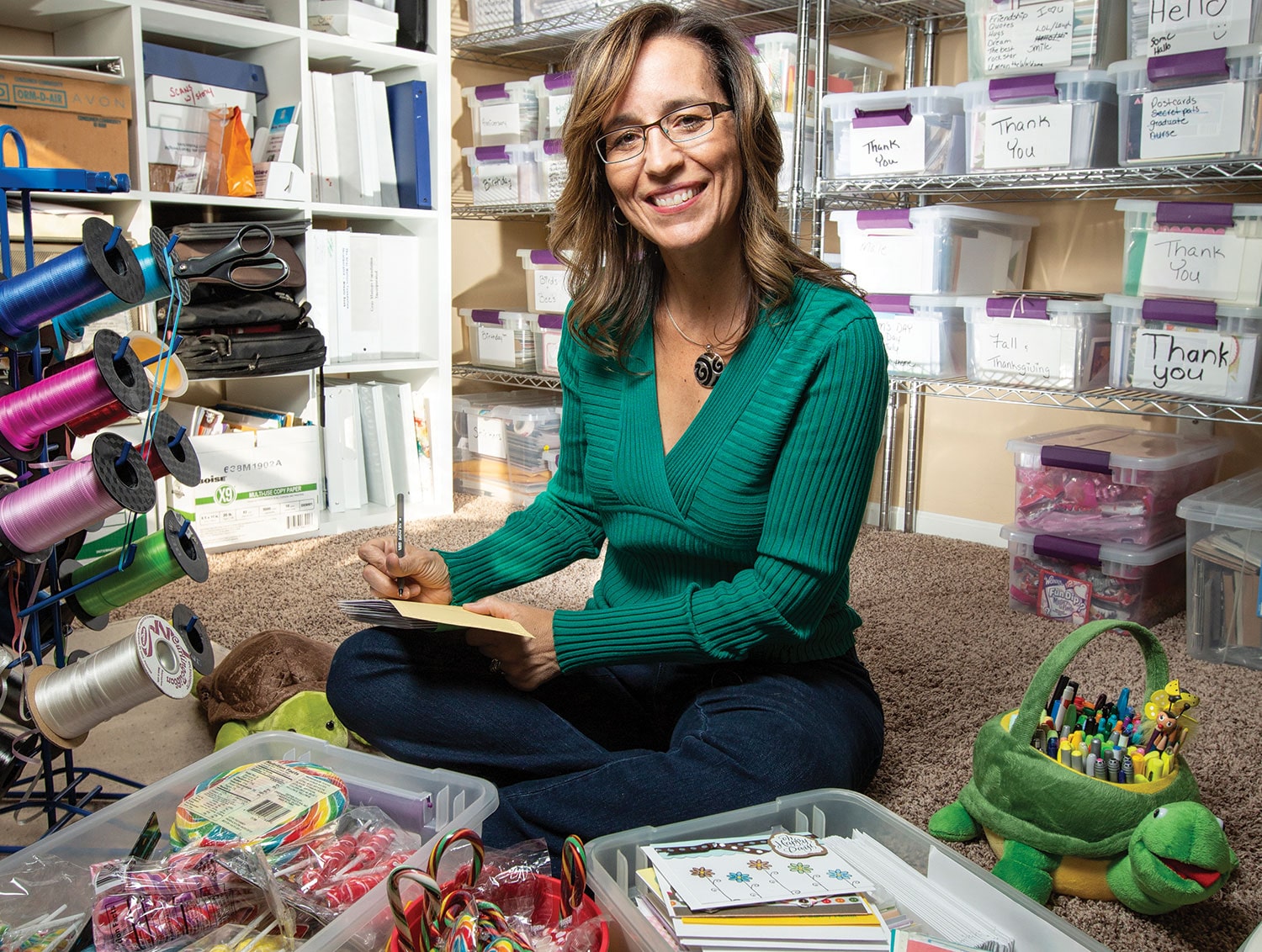 Lanette Veres sends cards, letters and packages to other brain cancer survivors from her home in Cave Creek, Arizona. Photo by Christopher Barr

LANETTE VERES OFTEN REFERS TO AN OVERSIZED DESK CALENDAR in her home office in Cave Creek, Arizona, to remind her where she needs to be, where she went, whom she needs to call and what they discussed. Handwritten notes and calendar reminders are a way to address short-term memory deficits, the result of numerous surgeries since her brain cancer diagnosis in 1998. The 49-year-old fills countless notebooks, diaries, pads of paper and binders to record conversations she has had with doctors, friends, family members and other brain tumor patients—all to jog her memory.

Her husband, Mike, also helps keep her on track. “When I go out to ride my bike every morning, I leave a note so she doesn’t forget where I am,” he says. “Sometimes I have to remind myself, because she’s doing so well and looks so normal, that there are these deficits.”

Veres, whose cancer has been in remission for more than a decade, and Mike have learned to deal with the setbacks. She and her family know the cancer could come back at any time. Every four months, Veres has an MRI brain scan. “We never know what it’s going to tell us,” Mike says.

A Fish Out of Water

Veres had been dating Mike for three years when she learned she had a brain tumor on Aug. 14, 1998. At the time, the single mother of two young children was a relationship manager at a national bank in Phoenix. “I was really good at it,” she says of her job. A year before she learned she had cancer, she experienced severe headaches but assumed they were related to her high-stress job. Her symptoms intensified and became almost unbearable. When she developed blurred vision and echolike distortions in her hearing, she went to a neurologist, who ordered an MRI scan of her brain.

As soon as the doctor told her she had a brain tumor, Veres thought of her grandmother, who had died nine weeks after she was diagnosed with glioblastoma, a type of brain cancer, in 1992. “My experience with brain tumors was that you died. I had two young kids, and I really wanted to live,” says Veres, whose children, Miles and Kellie, were 9 and 8 at the time.

On Sept. 2, 1998, Mike drove Veres to the Barrow Neurological Institute in Phoenix, where she would undergo a 13-hour surgery to remove a baseball-sized tumor from the right temporal lobe of her brain. She felt comforted that Carrie Walters, the neurosurgeon who had removed her grandmother’s tumor, would perform her surgery. Walters felt confident that she had removed the tumor completely. Despite the enc​ouraging news, Veres felt disheartened.​​

Prior to Lanette Veres’ surgery, her physician brought in leaves from a special tree.

Shortly after Kirk’s​ death, Veres and her family gave her grandmother’s neurosurgeon, Carrie Walters, a small potted ficus tree in appreciation for her care.

Walters also performed Veres’ surgery when she was diagnosed. Before the operation, Walters brought Veres a leaf from the same ficus tree, which had grown several feet and was thriving in Walters’ yard. “I knew I was going to be just fine because my grandma’s tree was still growing,” Veres says.​ 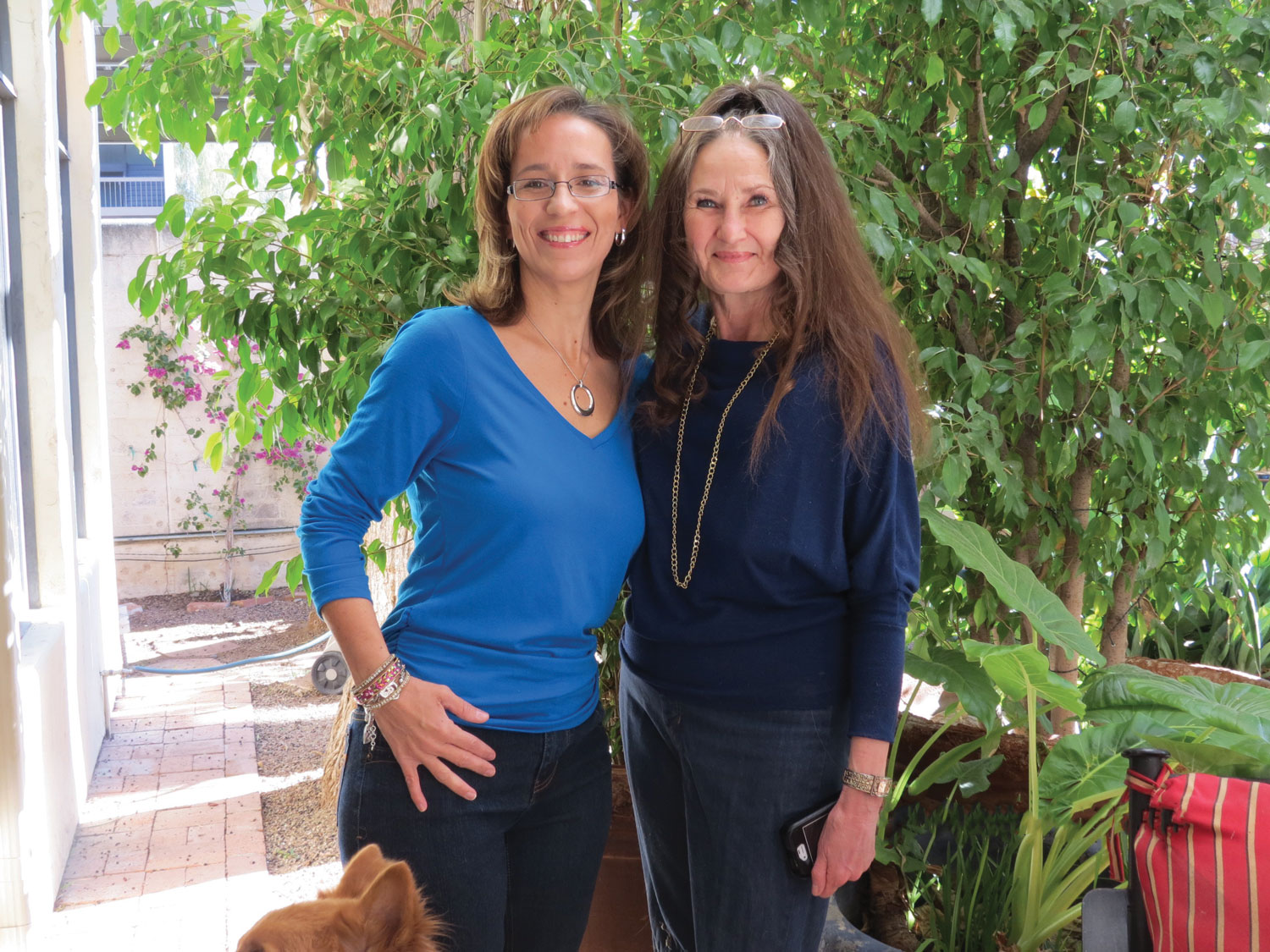 Lanette Veres, left, and her neurosurgeon Carrie Walters stand in front of a ficus tree in Walters’ yard. Photo courtesy of Lanette Veres.

Some years after her first surgery, Veres gave Walters, who is now retired, a second tree. This one was a piece of art—a framed tapestry containing a trunk and bare branches. Each year, around the time of her “tumorversary”—the day she found out she had cancer—Veres sends Walters a leaf to add to the tree to celebrate another year of living. The tree, now with 21 leaves, is filling out quite nicely.

“When we left the hospital after that first surgery, I felt utterly lost. There was no support for us,” says Veres, who was unable to return to her job at the bank after surgery because of difficulties in processing numbers. “I was a relationship manager at a bank. I didn’t know how to be a cancer survivor. I felt like a fish out of water.”

After pathologists analyzed the brain tumor tissue, Veres was diagnosed with a rare type of glioma.  She also learned her initial hearing and visual disturbances were caused by seizures, a common symptom that occurs in more than 70% of people diagnosed with a glioma. Veres’ tumor was considered high-grade, meaning it was likely to recur after surgery, says Nader Sanai, a neurosurgical oncologist at the Ivy Brain Tumor Center at the Barrow Neurological Institute. “The battle is never over in patients with [high-grade] gliomas,” he says.

Four months after her first surgery, Veres was back in the operating room. Another tumor had grown. “We were fortunate, once again, that it was in a location where we could go in after it,” says Walters, who performed the second surgery.

Relying on Each Other

Standing by Veres’ side, Mike worried about worst-case scenarios, but he also drew inspiration from her strength. He remembers a visit to Costco a few weeks after surgery, where Veres bought an enormous bundle of paper towels. “I’m thinking some people don’t even survive three months out, and here she is buying at least three months’ worth of paper towels. Her confidence was so contagious,” he says.

On Jan. 18, 2001, Veres and Mike were married in Kissimmee, Florida. The next day, they attended a survivorship conference hosted by the Florida Brain Tumor Association in Fort Lauderdale. For Mike, the event offered guidance on how to take better care of his wife. Veres felt part of a supportive community where she was understood. 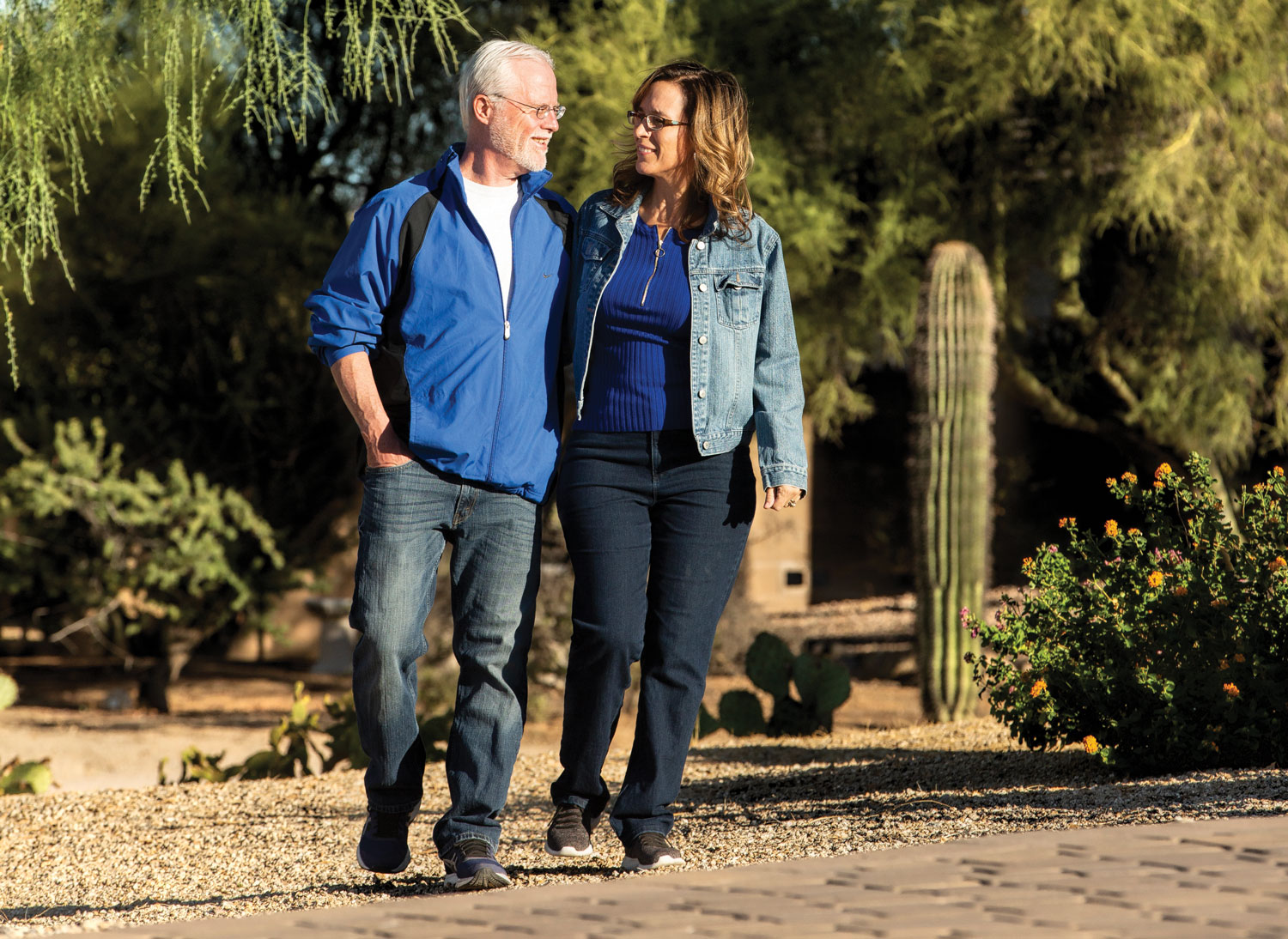 Lanette and Mike Veres, who were dating when Lanette first learned she had cancer, will celebrate 19 years of marriage this winter. Photo by Christopher Barr

When she returned home, Veres sent a card covered with bright and cheery stickers and inscribed with hopeful messages to a woman she had met at the conference. It felt good, so she did it again for others. At patient meetups and conferences, she would make a point to write down the address and birthday of each person she met. Soon she had sent dozens of care packages to brain tumor patients.​

In this video, Lanette Veres discusses the impact of her brain ​cancer diagnosis.​

In 2002, after numerous medications didn’t ease the symptoms of seizures, Veres had a temporal lobectomy to remove part of her brain where the electrical disturbances causing the seizures were taking place. The surgery reduced her seizures, but it left her with short-term memory deficits. Ordinary tasks became a challenge. That’s when she started writing things down to help keep her on track.

After several months of attending a support group for brain tumor patients at the hospital where she had surgery, Veres became the support group leader in 2003. She went through leadership training at her church and took classes with the American Cancer Society and Toastmasters International to learn how to use her experiences to help others. She also became certified as a volunteer hospital chaplain and started spending time with brain tumor patients and their families at the brain tumor center. “I made it my mission that no one else would feel the desolation we had felt when we walked out of that hospital the first time,” Veres says.

The same year she started volunteering at the hospital, a scan revealed yet another tumor, this one near Veres’ brain stem. Surgery at this location would be too risky since that part of the brain controls essential functions such as breathing and swallowing. Instead, Veres underwent six weeks of radiation followed by a year on a chemotherapy pill called temozolomide. In 2007, she had another brain surgery. Her surgeon removed a tumor that was located near the cavernous sinus behind her right eye. By that point, the cycle of surgeries, treatments and close surveillance had become familiar.

Since 1982, only five drugs have been developed for the treatment of glioma, and only one of them is part of the current standard of care, says Nader Sanai, a neurosurgical oncologist at the Ivy Brain Tumor Center at the Barrow Neurological Institute in Phoenix.

“We haven’t seen the kind of promising and encouraging drug development that other cancer fields have seen,” he says. The development of new brain tumor therapeutics has been challenging for several reasons. One is the blood-brain barrier, a nearly impenetrable boundary designed to keep out foreign substances, among them chemotherapies.

Researchers are attempting to overcome the hurdles to developing new therapies with phase 0 clinical trials—which are early studies that allow a small number of brain tumor patients to receive low doses of an experimental new therapy before brain tumor surgery. When the tumor is removed, researchers can assess the tissue to see whether a potential new drug has reached its intended target and to measure its effect on tumor tissue. Sanai hopes these exploratory studies “can help tilt the table so more new drugs start flowing through the brain tumor pipeline.”

​Unable to work at the bank, Veres has learned to apply her talents in other ways. In 2007, using the people skills she had fine-tuned as a relationship manager, Veres started the Gray Matters Foundation, a nonprofit focused on providing encouragement to brain tumor patients and their families through gift packages and cards. “I want people to know that they’re more than this disease they’re battling, whether that battle is short or long,” she says. Gray Matters Foundation has sent cards or care packages to brain tumor patients in nearly 50 states and 21 countries. 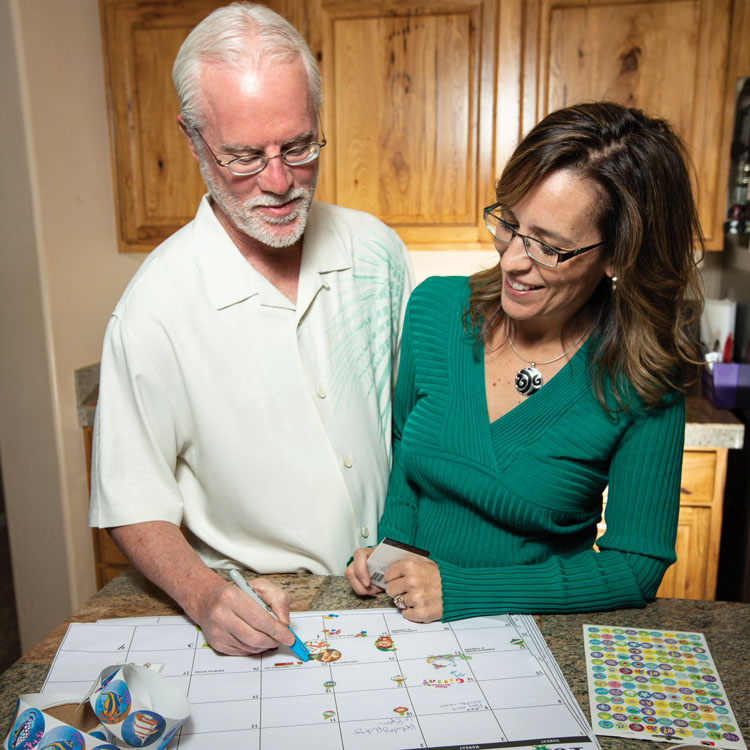 Lanette Veres and her husband, Mike, have a system to help her overcome memory challenges related to her brain cancer treatment. It includes making extensive notes on a desk calendar. Photo by Christopher Barr

“She has an incredible empathy for people who are in pain or suffering,” says Walters, who performed her first surgeries. “She knows what to do, what to say, how to help, like it’s instinctive.” Walters even remembers a time during her own recovery from hip surgery when Veres came to support her. Veres showed up with a binder “full of stickers and other things to cheer me up,” Walters says.

Mike remembers a group picture that included his wife and other brain tumor survivors from the first conference they attended in 2001. Very few people in that photo are still living, he says. Veres is aware that her presence as a long-term survivor can provide encouragement to others.

“I don’t know why I’m still here,” Veres says, noting how many friends she’s lost to the disease over the years. She vows to keep supporting others for as long as she can through simple acts of kindness. “It feels like what I was always meant to do,” she says.

Two mothers, each with a son who died of brain cancer, worked together to increase awareness and acceptance of tumor tissue donation.