A survivor keeps an eye on what’s ahead after a rare cancer diagnosis. 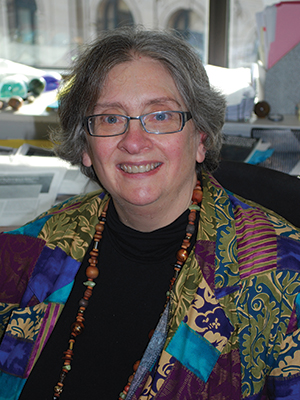 I have a favorite cartoon from the New Yorker that I’ve been carrying around for about 20 years. It shows a middle-aged, slump-shouldered man with a small attaché case, probably on his way to the commuter train, with a brick wall behind him and immediately in front of him a placard of the type that usually announces “Road Closed.” It says in all caps “ABANDON HOPE.” A few feet away another placard says “RESUME HOPE.”

Sometimes cancer can seem like another brick wall, and sometimes I’m tired enough that abandoning hope seems like a rational option. But that second sign isn’t going anywhere. I just have to remember to keep my eyes open as I’m walking down the street.

And that’s a visual challenge because the view isn’t quite as clear as it was just six months ago. I have a tumor behind the retina of my left eye in the area called the choroid, which makes me one of the approximately six in a million people diagnosed with choroidal melanoma in the U.S. each year. Most people who know about melanoma of the skin probably have no idea that it can also affect the eye, and they’re also surprised to learn that it can spread from the eye to other organs, most frequently to the liver.

Although I work as a production editor on the scientific journals published by the American Association for Cancer Research, I, too, was unfamiliar with this type of cancer before I was diagnosed this past April. Like other rare cancers described in the Fall 2012 issue of Cancer Today, choroidal melanoma has not been extensively studied in clinical trials because of the difficulty in finding large enough groups of patients to generate results that might warrant approval of a drug for its use against this particular cancer. And with treatment options less certain, it’s easy to lose sight of hope.

Nonetheless, my doctors and I hoped my initial treatment in May, two weeks after my diagnosis, would initiate a gradual shrinking of the tumor. In a simple surgical procedure, a metal disk containing radioactive seeds was placed over my left eye, where it stayed for four days. During the procedure, the surgeon also extracted DNA from the tumor with a needle biopsy to assess my risk of metastasis. The DNA in that sample would show whether I had any of the irregularities on chromosomes 3, 6, 8 or 9 that are linked to a high risk of the cancer spreading, usually to the liver and more rarely to the lungs. I had to wait two months to find out.

That long period of uncertainty was hard to live with, and more uncertainty was still to come: My genetic test results suggested a 50 to 70 percent risk of metastasis over the next two to five years. Worse still, the size of my tumor (8- by 19-millimeters, or penny-size, which puts it into the medium-to-large range) and its location relative to the eye were not optimal.

While I was in shock from the news, my doctor and his staff got to work on obtaining approval from my insurance company for me to take Sutent (sunitinib), a drug that blocks the formation of blood vessels that nourish tumors and allow cancer to spread. This would be an off-label use of the drug, which is not approved by the U.S. Food and Drug Administration for the treatment of choroidal melanoma. Sutent was developed for use in gastrointestinal cancer but has shown promise in a small ongoing pilot study of people like me. Finally, I got a piece of good news the next month, when I heard that my insurance carrier had given its approval, as this particular hurdle is a difficult one for many patients. I was also relieved to learn that MRIs and a CT scan showed no sign of metastases in my liver or lungs.

Going forward, I’ll continue to get MRIs every three months and CT scans twice a year. In the meantime, I’m keeping my eyes—however fuzzy—on the present and the future, and vigilantly attending to my treatment routines. That’s a job in itself, but I’m also still hard at work at my day job. As I work through a paragraph describing the scientific underpinnings of a promising research effort, I tend to forget that I have cancer. But then I focus on the meaning of the words: perhaps the discovery of a new biomarker that could lead to a breakthrough in prognosis or treatment. Then I think, that’s me they’re talking about. I’m part of that story, and I resume hope.

To Test or Not to Test

A mother and daughter exchange thoughts about their “full-family experience” facing an ovarian cancer diagnosis and treatment.