An ad campaign shines a light on lung cancer blame.

Did they smoke? That’s often the first question people ask about someone who has been diagnosed with lung cancer. The words aren’t typically meant to be hurtful, but the implication is clear: It’s their fault. 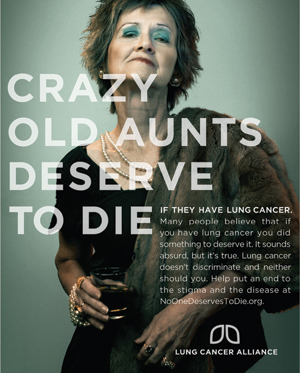 Tackling this harmful stigma head-on, the Lung Cancer Alliance, a Washington, D.C.–based support and advocacy organization, launched a provocative public awareness campaign this past June called “No One Deserves to Die of Lung Cancer” with ads on bus shelters, phone booths, subway stations and movie theaters in 31 cities nationwide; they also appeared online.

The ads blared phrases like “Cat Lovers Deserve to Die,” “Crazy Old Aunts Deserve to Die” and “The Tattooed Deserve to Die” alongside a box containing a brief explanation about lung cancer’s stigma; the campaign confused some, riled many and resulted in extensive media coverage. The goal, according to Kay Cofrancesco, the organization’s director of advocacy relations, was to change beliefs about lung cancer. “We succeeded in igniting this dialogue,” she says.

The campaign can be viewed on the group’s website.