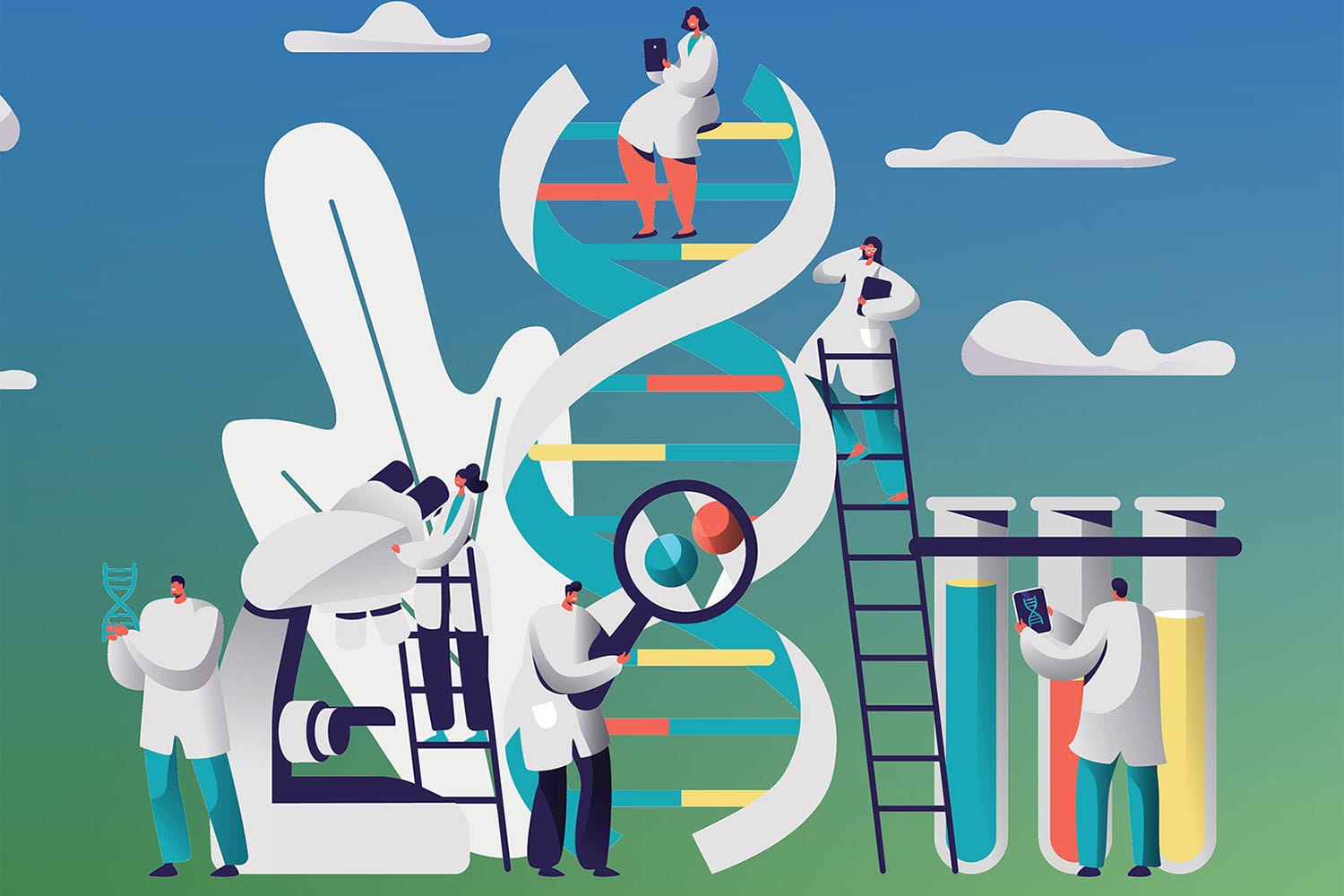 ALL HUMAN CANCERS are the result of defects both in genes and in gene function. Gene defects are alterations in DNA sequence in the cancer cells. They can be detected by genome sequencing techniques, such as those used for precision cancer medicine. Abnormalities in gene function, termed epigenetic (“over” or “on top of” genetic) defects, are experiencing an upsurge in attention that promises new approaches to cancer prevention, screening, detection, diagnosis and treatment.

Richard P. Feynman, awarded the Nobel Prize in Physics in 1965, once observed that “nature uses only the longest threads to weave her patterns, so each small piece of her fabric reveals the organization of the entire tapestry.” For human DNA, an exceptionally long thread—about 2,000 millimeters (approximately 6 1/2 feet)—needs to be woven into the nucleus of each cell. This creates a formidable packing challenge. The typical cell nucleus is only 0.005-0.010 millimeters (0.0002-0.0004 inches) in diameter.

The human body contains at least 200 specialized kinds of cells, and the packing of genomic DNA has to allow different genes to be active in these different cell types. The major packing principle involves the spooling of 146 base-pair segments of DNA around proteins called histones to create nucleosomes. For active genes, the DNA is loosely looped around the histones; for inactive genes, the DNA exists in more tightly wound nucleosome structures. To allow normal cells to reproduce with fidelity, in addition to providing an accurate copy of the entire DNA sequence for each “daughter” cell, the partitioning of genes into active and inactive configurations must also be faithfully re-created.

The way in which a facsimile of the “parental” cell DNA sequence can be delivered to each daughter cell has long been understood. The DNA double helix contains two complementary strands, in which the DNA base adenine (A) from one strand always pairs with thymine (T) from the other, and guanine (G) always pairs with cytosine (C). This allows for a replication process in which each strand can serve as a template for a new DNA duplex. The mechanisms for duplicating the organization of DNA for each daughter cell are only recently becoming better defined. Active and inactive genes have different chemical “marks” on DNA and on histones. These epigenetic marks drive the maintenance of DNA structure to feature loosely and tightly wound nucleosomes as the DNA sequence is duplicated.

Cancer cells contain extensively corrupted epigenetic marks. Certain genes crucial for suppressing tumor formation become less accessible, while other genes that can transform a cell into a tumor cell become more available. Unfortunately, because such marks can be maintained as one cancer cell gives rise to two cancer cells, these acquired epigenetic alterations can conspire with changes in DNA sequence to endow cancer cells with seemingly limitless propensities for proliferation and dissemination throughout the body.

How can emerging insights into epigenetic abnormalities in cancer cells lead to better cancer outcomes? As one example, many epigenetic marks can now be readily identified in small numbers of cancer cells or in small amounts of free DNA from cancer cells. This will likely aid in cancer screening, detection and diagnosis. Already the Cologuard and ConfirmMDx tests for colorectal cancer and prostate cancer, respectively, exploit the ability to discern epigenetic marks. New cancer epigenetic tests are on the horizon.

A plethora of anti-cancer epigenetic drugs appears to be on the way as well. These drugs aim to reprogram the structure of DNA in the cancer cell nucleus by targeting the writing, erasing and reading of marks on DNA and on histone proteins, with the goal of activating abnormally silenced genes and shutting down abnormally active genes. So far, a handful of such drugs—azacitidine, decitabine, Istodax (romidepsin) and Zolinza (vorinostat)—have been approved by the U.S. Food and Drug Administration for treating various cancers. Several other drugs have reached clinical trials.

As a corollary to Feynman’s reflection on nature’s fabric, reweaving cancer’s longest thread, its DNA, may be needed to cure cancer and save life, the most attractive tapestry.