Progress, But Still Room for Improvement

The winter 2019/2020 issue of Cancer Today tells the stories of people working to improve privacy protections for patients seeking support online, expand access to genetic testing and boost the efficacy of immunotherapy to benefit more patients. 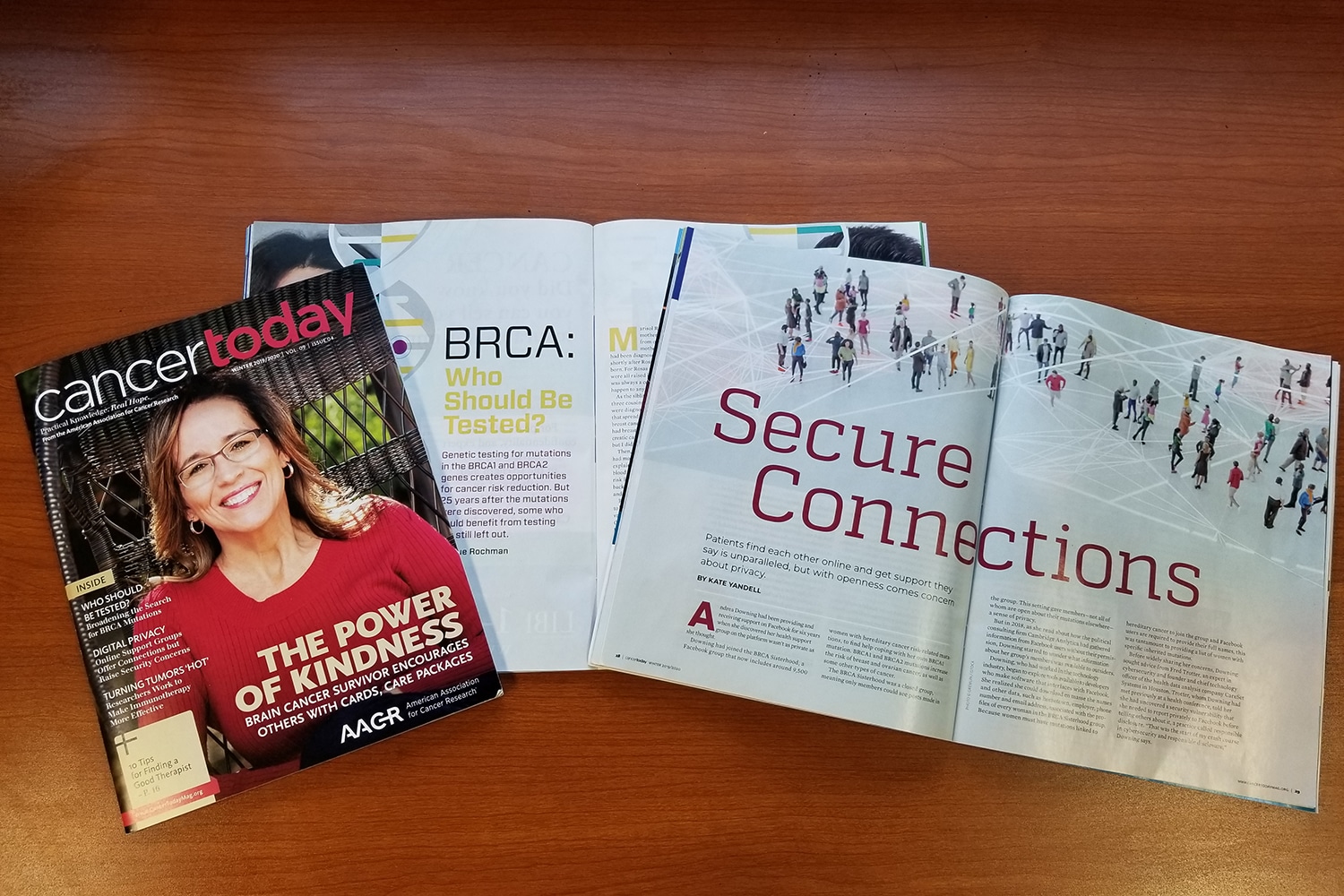 IN THE FALL 2019 ISSUE OF CANCER TODAY, associate editor Bradley Jones wrote about people affected by cancer who use digital and other media to express their thoughts, feelings and experiences. Patients say the internet has been invaluable for forging connections with people going through the same experiences as they are. But seeking support on the internet can also come with downsides. Writing in the winter 2019/2020 issue, digital editor Kate Yandell discusses the possible loss of privacy and exposure of personal health information that can come with seeking support online.

Alarmed by news of how political consulting firm Cambridge Analytica gathered information from Facebook users without permission, Andrea Downing, a member of the BRCA Sisterhood Facebook community, discovered she could download personal data for every woman in the group. Downing and Fred Trotter, a cybersecurity expert, along with others, formed the Light Collective to support similar online communities facing challenges in navigating online privacy. “Thinking about the value of a community and the vulnerabilities of a community is an important shift in thinking for patient support groups,” Downing says.

Contributing editor Sue Rochman has long covered breast cancer-related issues, including testing for the BRCA1 and BRCA2 mutations, which were discovered 25 years ago. Despite progress in identifying people with these mutations, there are still many individuals who do not know they have them, Rochman writes. With the recognition that these mutations increase risk for cancers other than breast and ovarian cancer—for example, melanoma and pancreatic and prostate cancer—some have advocated for BRCA1 and BRCA2 genetic testing for a broader population of women, and for some men to receive testing as well. Rochman writes about Michael Sudman, an attorney who saw his aunt and cousin die of breast and ovarian cancer, respectively. When Sudman’s sister was diagnosed with breast cancer, she had genetic testing and found she had a BRCA1 mutation. Sudman immediately thought of the risk to his two other sisters, both of whom tested negative for the mutation, but he didn’t think of his own risk. Eventually, Sudman’s nurse practitioner convinced him to get the test, and he tested positive for a BRCA1 mutation. He credits this discovery and a heightened awareness of his cancer risk with a diagnosis of early-stage prostate cancer in 2015.

Amid calls for more extensive genetic testing in populations traditionally thought to be at lower risk for harm from BRCA mutations, some argue that large groups of people already known to be at high risk are not being tested. “While we’re having this debate about what the threshold for testing should be, it’s also important to remember that there are a lot of people right now who are not getting access to testing … and this is often minorities,” says Susan Domchek, a breast cancer geneticist at the University of Pennsylvania Perelman School of Medicine in Philadelphia. “So, we need to address this disparity.”

Finally, one of the most promising new areas of cancer treatment is immunotherapy—which works by equipping the body to use its own immune system to attack cancer cells. New immunotherapy treatments and additional uses for already approved treatments generate headlines and news stories, but science writer Kendall K. Morgan writes that immunotherapies still benefit just a fraction of patients. A study published in May 2019 estimates that only about 13% of patients eligible for treatment with checkpoint inhibitors, a type of immunotherapy, respond to the therapies. Melanoma, non-small cell lung cancer, and kidney and bladder cancers can be treated effectively with checkpoint inhibitors. Patients with pancreatic, ovarian and brain cancer have, for the most part, not benefited from these treatments.

Researchers are trying to better understand why immunotherapies work for some cancers and patients and not for others. Innovations to improve treatment results include combining immunotherapy drugs with traditional treatments like chemotherapy, and using vaccines to stimulate the body’s immune system to recognize cancer as something to be attacked. “We need to find ways to make more tumors respond to treatment, to turn a ‘cold’ tumor into a ‘hot’ tumor,” says Joseph Ciccolini, a clinical pharmacologist at the University Hospital of Marseille in France.