Attending a scientific conference as a patient advocate can be an exhausting, overwhelming and hugely rewarding experience. 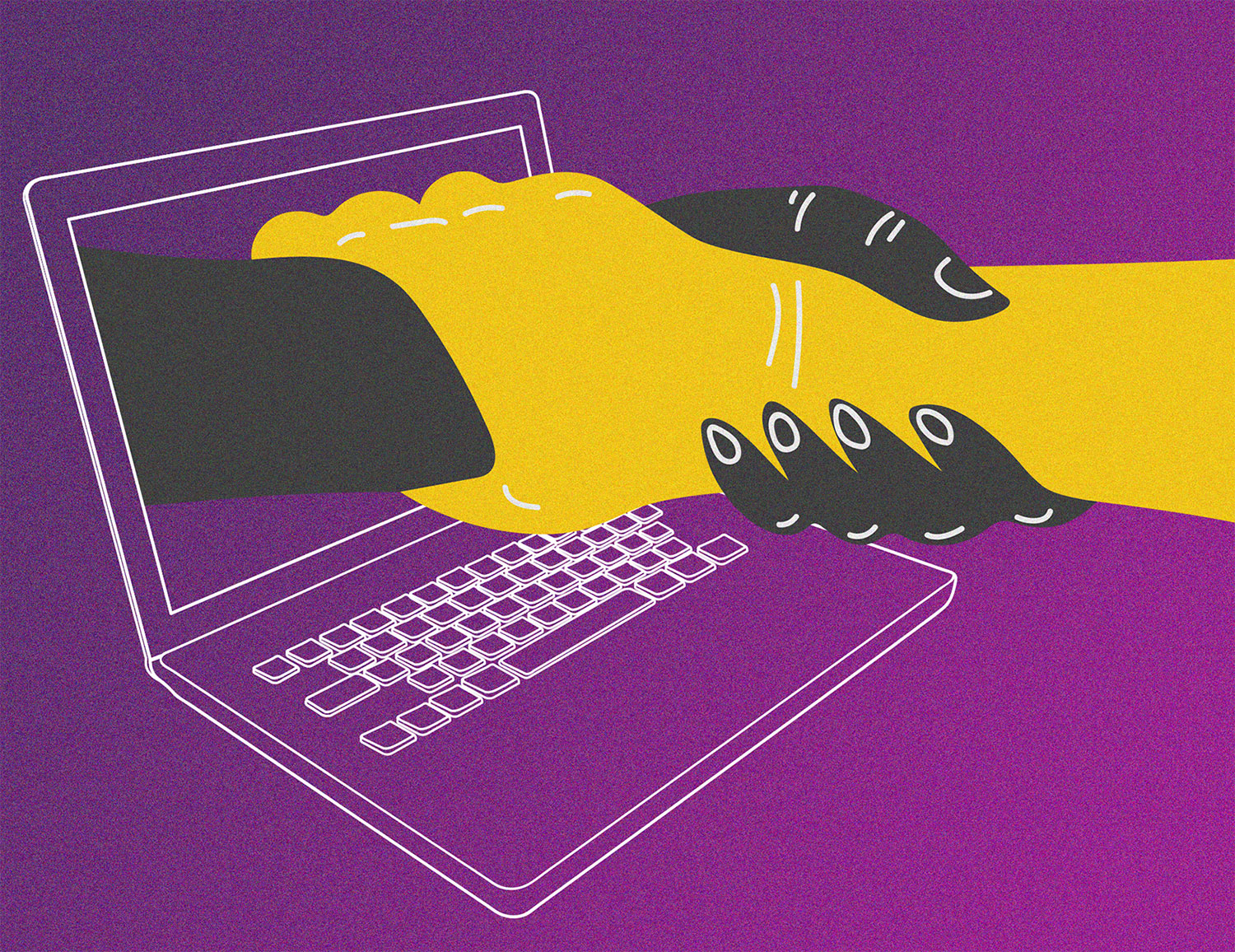 THOUSANDS OF SCIENTISTS COME TOGETHER from all over the world for the American Association for Cancer Research (AACR) Annual Meeting—whether in person or virtually, as has been the case for 2020 and 2021. (The AACR publishes Cancer Today.) But what makes the conference such a vibrant summation of the cutting edge of cancer research is that scientists and clinicians are not the only people in attendance. Each year, the Scientist↔Survivor Program (SSP) gives patient advocates direct access to the latest science and the people responsible for pushing it forward.

Hosting the Annual Meeting virtually has required many adjustments, but in some ways it has made it easier than ever before to access the meeting. Eunice Sebikaari lives in Kampala, Uganda, but she was able to take part in this year’s SSP via the internet. “It was an awesome learning experience,” says Sebikaari. “I can’t wait to share these great findings with the cancer patients and fellow advocates in Uganda. I feel more empowered and knowledgeable to fight cancer from a better vantage point.”

It’s not uncommon for advocates to take part in SSP with a view to sharing what they learn among their patient communities. Rebecca Yeung was diagnosed with lung cancer in 2017. Since then, her husband, Wayne, has been gathering as much knowledge as he can on her cancer. “All that I’ve learned is off the back of my wife’s hard work,” he says. “She’s dealt with all the pain and suffering, and I’m just the guy who remembers all the details.” Last year, Rebecca and Wayne joined an online group established for people who have a KRAS mutation called KRAS Kickers. The KRAS mutation has been linked to lung cancer and other cancer types.

Wayne has become a useful source of answers for the group’s questions about treatment, thanks to his many hours of research, as well the lived experiences of Rebecca, who is currently on her seventh line of therapy. Wayne came to SSP hoping to make connections on behalf of his group and to learn more about emerging treatment options he can share with his fellow KRAS Kickers.

Connection was a common theme among many of the SSP participants who spoke to Cancer Today about their experiences. Someone looking to find out more about the latest developments in cancer research is not going to be disappointed by the AACR Annual Meeting.

But while there are other ways to stay current with what’s going on in the field, it’s difficult to replicate the large numbers of people with varying interests and specializations who come together for the conference.

Laurie Betts came to the Annual Meeting with a few goals in mind. Like others, she wanted to learn more about the science of cancer and its treatment. Having been treated for esophageal cancer in 2019, she also wanted to provide some visibility to the disease, which is relatively rare. But one of her major focuses was figuring out a way to make her advocacy group, the Patient Advocates for Research Council of the UNC Lineberger Comprehensive Cancer Center, more representative of the surrounding community.

“The advocacy group I belong to is very white and pretty female,” says Betts, who has been participating in the group for about six months. “Our cancer center has a lot of diversity efforts, but I was particularly looking for ways to recruit patients.” She says that she was able to make contacts at the Annual Meeting with attendees who said they would help her in these efforts. The range of disciplines assembled for the Annual Meeting means that it’s not just questions about the science of cancer that can be answered. A little networking can yield all kinds of useful connections.

Sometimes that connection is made with a fellow patient, rather than a researcher or a doctor—and indeed, sometimes it’s a researcher or a doctor who is asking the questions. This idea is central to the advocacy of Julia Maues, who has been living with metastatic breast cancer for the past eight years. “Over the last few years, I’ve recognized my expertise as a patient,” she says. “When I participate in discussions, my contribution is from the perspective of, ‘I am an expert in living with cancer. I am not an expert in the science, someone else is.’”

For Maues, it’s important that there is a two-way exchange of information between scientists and patients, which is a core principle of SSP. She’s ready and willing to share what she’s learned from years of experience living with cancer, insights that a researcher wouldn’t have even after decades in the lab. She recalls talking to early-career scientists who had never spoken to a patient with the cancer type they study, and observing the shift in how they perceive the disease after seeing the effect their work can have.

In return, a program like SSP can help fill some of the gaps in an advocate’s scientific knowledge. “I would tell someone that wants to attend [the AACR Annual Meeting] and they don’t have a scientific background, I think I would say don’t do it without guidance of some sort,” says Maues. “Either participate in SSP or work with an organization that will do some hand-holding.”

Maues appreciated the talks designed specifically for SSP participants, which tailor language to the audience and review foundational concepts without compromising on the complexity of the topics. She praises the scientists selected to lead these sessions for their ability to communicate intricate subject matter to a nonscientific audience, and especially welcomed the opportunity to ask questions after the session, even if the limitations of a virtual conference meant that these discussions weren’t as direct as they might have been in person.

Like Maues, Erin Geddis Cummings has a wealth of firsthand experience with cancer, having been diagnosed with Hodgkin lymphoma at 15 years old in 1972. But a deep knowledge of living with cancer doesn’t necessarily equate to a deep knowledge of the underlying science. “I do not come from a scientific background, and I really struggle with that aspect of it,” says Cummings. “I thought being a pre-med student in college, I might have a few brain cells left for this, but the truth is, it’s a whole new world.”

Cummings worked hard throughout the conference, attending lectures, taking copious notes, reading abstracts and looking at posters. At the end of each day, she would go back and try and untangle the things she didn’t understand well. Looking back on her experience, she thinks that the time she spent preparing might have been better spent focusing on familiarizing herself with the basics of common topics such as immunology and targeted therapy. She recommends that other people in her position become as comfortable as they can with key vocabulary and acronyms ahead of time, so they can concentrate on the sessions as they’re unfolding rather than consulting their cheat sheets and notes.

A conference like the AACR Annual Meeting can be grueling for attendees, especially if they’re trying to get the most out of the experience by filling their schedule. For Cummings, getting a broad picture of how cancer research is surging forward was empowering, even if it was difficult to grasp the intricacies of each and every session. “It’s so exciting,” she says. “Bewildering, but exciting. As a cancer survivor, that alone made it all worth it, worth the struggle of trying to keep up.”

The AACR Annual Meeting doesn’t just bring together emerging research, it’s a gathering of people. The science is the reason everyone comes together, but often it’s the human connections made that will linger on in the minds of those who attend, and perhaps spur the next big developments in advocacy and research alike.

“The opportunity to meet other survivors, hear about how they’re doing and what they’re doing in their own space, whether it’s advocacy or research or whatever, is a gift,” Cummings says of her experience this year. “For that reason alone, I’d do it again tomorrow. I’d rest up and I’d maybe read a little more, but I’d dive right back into it. Just listening to these brilliant scientists, again, speaking languages I didn’t understand, but doing it with such earnestness and passion and excitement. It makes me hopeful. That’s worth a week of being exhausted.”​​​