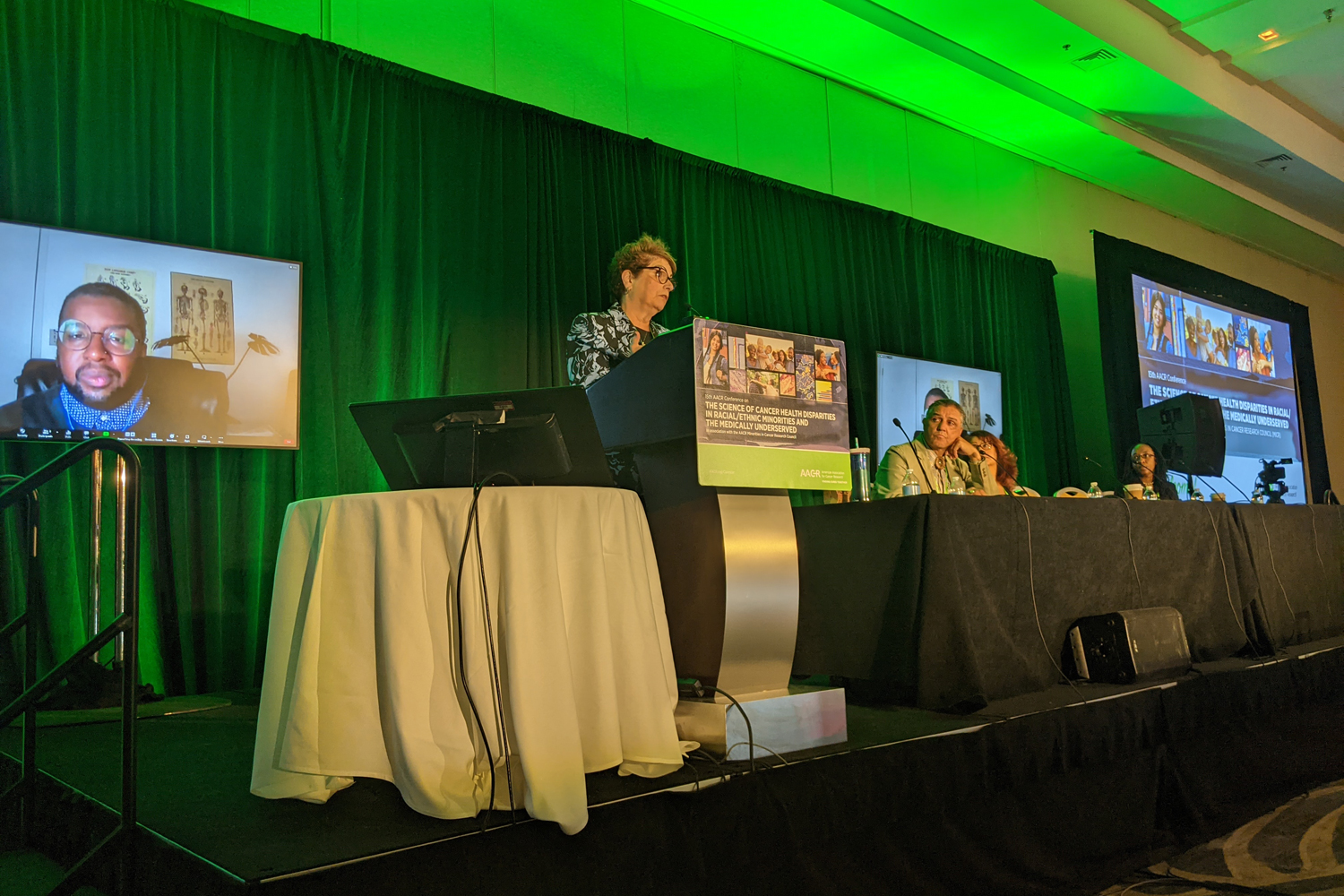 WORKING THROUGH EXISTING COMMUNITY STRUCTURES and organizations is the best way to reach people who are underrepresented in cancer research and underserved in cancer care, according to speakers at a special advocacy session Sept. 18 at the 15th American Association for Cancer Research (AACR) Conference on the Science of Cancer Health Disparities in Racial/Ethnic Minorities and the Medically Underserved, held Sept. 16-19 in Philadelphia. (The AACR publishes Cancer Today.)

In reaching out to groups as varied as the primarily white population of Appalachia, LGBTQ+ individuals, Black people, whether U.S.-born or immigrants to this country, and Native Americans, “You have to listen, you have to meet them where they are,” said Electra Paskett, founding director of the Center for Cancer Health Equity at the Ohio State University Comprehensive Cancer Center in Columbus. Paskett moderated a panel of experts who described their work reaching out to marginalized people. The hour-long session was titled “Addressing Advocacy at the Bench—A Discussion About Cultural Literacy: Addressing Cultural Competence.”

Gabriel Glissmeyer, a project specialist for the National LGBT Cancer Network, described attempts to increase representation of people who are LGBTQ+ or Black, indigenous or people of color (BIPOC) in the cancer research field. Among the challenges they face are low representation of these groups in science, technology, engineering and math (STEM) education and a lack of resources for and discrimination against those who choose to study in these fields. Through a program called Cancer Leaders Like Us, the National LGBT Cancer Network is attempting to provide resources and training to support students, researchers and clinicians from these populations.

Ivis Febus-Sampayo, who recently retired from SHARE, a patient advocacy group for women with breast, ovarian, uterine or cervical cancer, played a critical role in establishing LatinaShare as an outreach to Spanish-speaking women with these cancers. Febus-Sampayo, a two-time cancer survivor who was born in New York City to a Puerto Rican family, established a series of novelas, comic-style books, in Spanish and English on various cancers, including early-stage and metastatic breast cancer and ovarian cancer. Not yet published, she said, are novelas on clinical trials and on cancer genetics and breast cancer. SHARE also increased efforts to connect with Black women by working through members of that community.

The Southeastern American Indian Cancer Health Equity Partnership (SAICEP) is a joint effort of the three National Cancer Institute-designated comprehensive cancer centers in North Carolina to address the cancer-related needs of American Indian communities in the state and beyond. Ronny Bell, a member of the Lumbee tribe, represents Wake Forest Baptist Comprehensive Cancer Center in SAICEP. The other two participating cancer centers are UNC Lineberger Comprehensive Cancer Center and Duke Cancer Institute. Bell is also the chair of the North Carolina American Indian Health Board.

Outreach to Native American communities in North Carolina requires assessing cancer incidence, stage at diagnosis and mortality in this population, Bell said. Any outreach needs to build on already-existing relationships with tribal leaders, he said, to increase cancer awareness, expand access to cancer education and build community in the population.

Camille Ragin of Fox Chase Cancer Center in Philadelphia described her research into cancer incidence in Black populations in the U.S., who on average have the highest mortality and lowest survival rates for most cancers, she said. However, the U.S. Black population is heterogeneous, with a large minority of immigrants or descendants of immigrants from the Caribbean region and Africa. Foreign-born Black people in the U.S. have lower rates of cancer, especially lung cancer, Ragin said, in part due to lower smoking rates in these communities, especially among women. For example, using data from 2012 to 2018, Ragin said, 98% of Caribbean women immigrants and 97% of women immigrating from Africa reported never smoking, while 64% of U.S.-born Blackwomen said they never smoked.

Paskett opened the session by describing work she had done to address cervical cancer in Ohio by working with community leaders. According to Paskett, 32 counties in Ohio are part of Appalachia as designed by the federal government. These areas are characterized by higher rates of human papillomavirus, or HPV, infection, which increases the risk for developing cervical cancer. Among the challenges they faced, Paskett said, was the attitude that “In Appalachia, we don’t talk about cancer, and we don’t talk about cervix.” By working through community groups and training community health workers, Paskett said, more than 77,000 women have been reached by the programin Ohio by people trained “to take care of [their] own.”

“That is the power we have working with the community,” she added.