Patient advocates meet amid an outcry about research funding cuts, participate in a meeting with FDA officials and visit Capitol Hill. 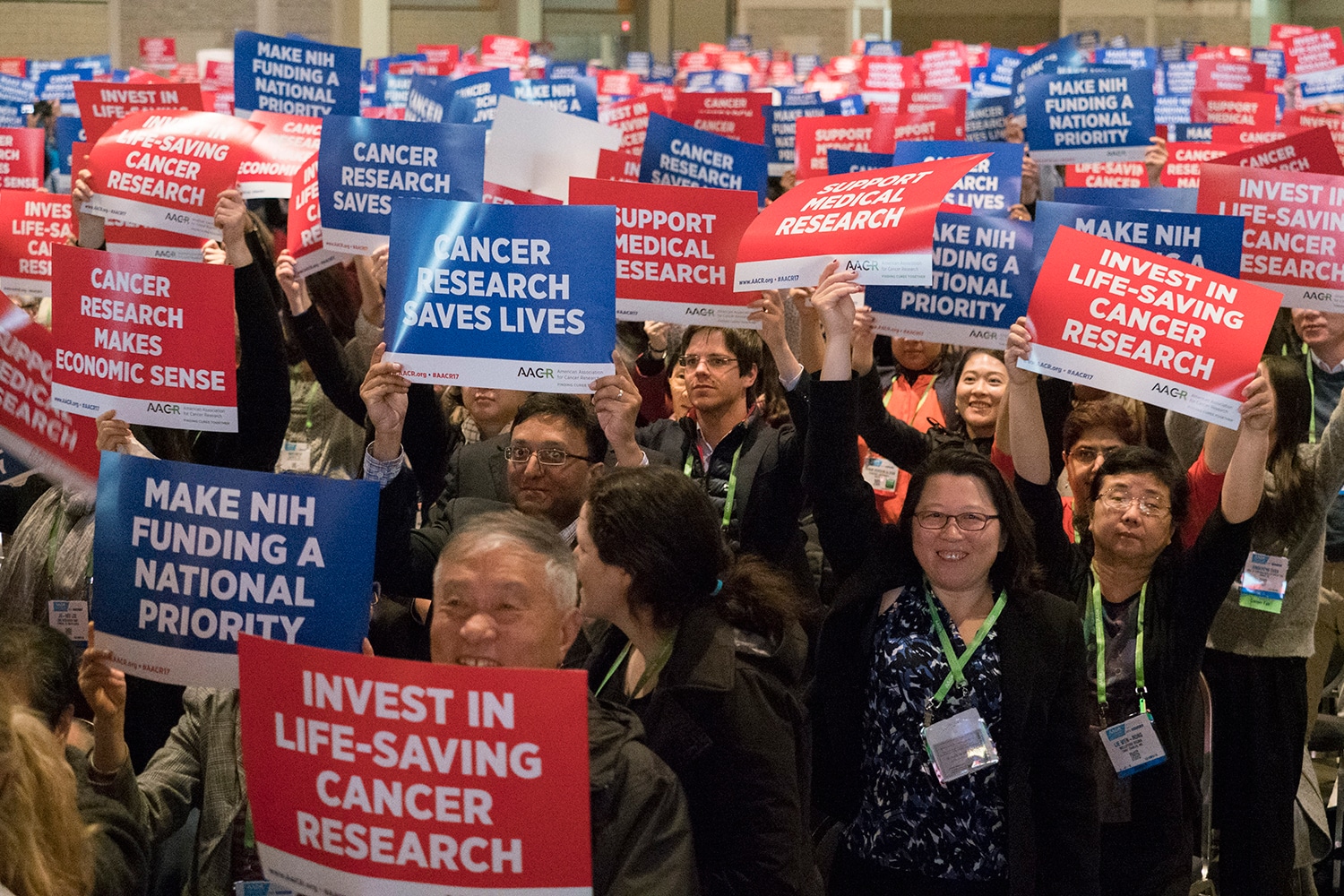 Attendees of the American Association for Cancer Research Annual Meeting 2017 held up signs in support of research funding. Photo by © AACR / Alan Lessig 2017

​The Scientist↔Survivor Program (SSP), which takes place each year in tandem with the American Association for Cancer Research (AACR) Annual Meeting, ​gathered in Washington, D.C., April 1-5 amid a furor surrounding proposed cuts to federal funding of biomedical research.

SSP, now in its 19th year, brings cancer survivors and patient advocates together to learn about key concepts in cancer research from researchers themselves. Advocates attend the meeting alongside scientists and participate in SSP educational sessions led by cancer experts on concep​ts such as precision medicine, big data and immunotherapy.

In the wake of President Trump’s proposed budget cuts to federal funding for research, this year’s programming at SSP and the Annual Meeting as a whole included sessions on the federal government’s role in funding research. During the Annual Meeting’s opening session April 1, thousands of attendees held up red and blue placards in support of research funding.

​​​Former Vice President Joe Biden addressed meeting attendees​ April 3, sharing examples of the enormous progress that can be made by aiming high and working together. After his speech, a panel discussion brought together public officials, researchers and advocates.

“These are different times, I understand, politically, and people may be a little nervous about where Congress is going and what Washington may do as it relates to funding,” said panelist Rep. Kevin Yoder.  “So I guess, first and foremost, I am here to reassure you that this continues to be a priority for this Congress.”

Yoder has worked to increase funding for the National Institutes of Health, garnering support on both sides of the aisle. “The goal is to lay a marker in both parties to say this is a bipartisan, nonpartisan issue,” he said.

The Kansas Republican quantified the toll of cancer in lives lost and dollars spent caring for the sick, and highlighted the power of research in creating jobs, fueling the economy and saving lives. “We know if there were 600,000 lives lost to terrorism or to national security, there would be an immediate demand to spend every dollar at our disposal to beef up our defenses,” he said. “Well, 600,000 people are going to die every single year [from cancer], so to me, this is a national defense issue. When you spend $700 billion on national defense but only $32 billion on research for cure of every disease, it seems we can do a much better job of targeting an area where every American is vulnerable to a threat.”

Later that afternoon, advocates met with Richard Pazdur, director of the U.S. Food and Drug Administration (FDA) Oncology Center of Excellence in Silver Spring, Maryland, and other FDA officials. The advocates asked about expanded access to not-yet-approved medications, loosening clinical trial enrollment criteria to exclude fewer patients, how to report side effects to the FDA, and how to determine what makes a drug valuable to patients. Pazdur, an oncologist and cancer researcher, talked about his own experience with cancer, having lost his wife to ovarian cancer in November 2015.

On April 4, advocates headed to Capitol Hill for a panel discussion that included opening remarks by Rep. Diana DeGette, a Colorado Democrat, who introduced the 21st Century Cures legislation with Rep. Fred Upton, a Republican from Michigan. DeGette, too, was reassuring about the future of cancer research funding.

“I’ve been told by my Republican and Democratic colleagues in the House and Senate in key roles that they disagree with this provision of the budget, and they intend to make sure we have the full funding,” DeGette said. “But it wouldn’t hurt for them to hear about how important it is, too. We just made this huge advance. Let’s not go backward,”

One after another, panelists introduced themselves and shared their narratives about how they’ve been touched by cancer.

“This is personal for us. Obviously cancer is personal for all of you,” said George D. Demetri, a physician-scientist at Dana-Farber Cancer Institute in Boston, who moderated the discussion at the U.S. Capitol Visitor Center.

“Cancer affects everybody, and I think one thing that is important for the public to know about is that people who dedicate their lives to studying this and hopefully making things better for cancer patients are not sterile scientists who aren’t human,” said Demetri, who is also the chair of the AACR Science Policy and Government Affairs Committee. “We have been touched as well.”​​