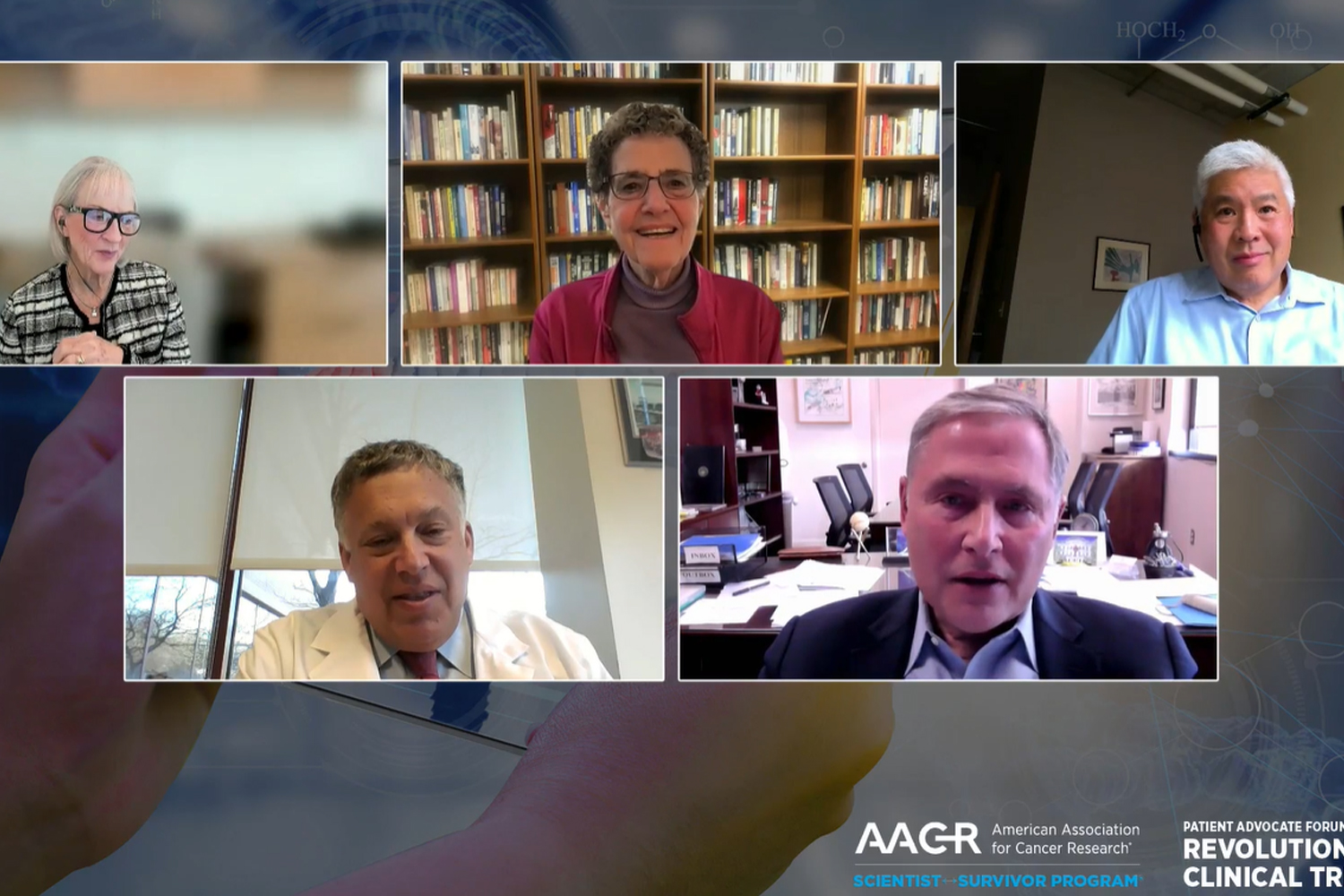 CLINICAL TRIALS HAVE LONG FOLLOWED a consistent formula: researchers design a study for a single treatment, randomly assign participants to a research arm and patiently wait to see long-term outcomes.

That formula, however, doesn’t match the current pace of cancer research. With new advances being made seemingly every day, by the time a trial reports its results its design may be outdated, comparing the new treatment against a standard that has already been replaced.

A new generation of clinical trials is eschewing the traditional formula by testing multiple drugs at once, adapting the trial’s design as it progresses and employing other innovative approaches designed to get potential treatments to patients quicker.

“The trials you are going to hear about today are not your mother’s clinical trials,” said moderator Anna Barker, chief strategy officer of the Ellison Institute for Transformative Medicine in Los Angeles, as she opened a Virtual Patient Advocate Forum titled “Revolution in Cancer Clinical Trials.” Hosted by the American Association for Cancer Research (AACR), which publishes Cancer Today, the Nov. 29 event featured researchers and patient advocates discussing these new trial designs and how they are changing the way treatments move from the lab to the clinic.

Douglas Yee, an oncologist and director of the Masonic Cancer Center at the University of Minnesota in Minneapolis, spoke about his work on I-SPY 2, a clinical trial evaluating breast cancer therapies given to patients before surgery. I-SPY 2 uses complete pathological response, the disappearance of all signs of cancer after a treatment, as its endpoint since it has been associated with better overall and relapse-free survival rates.

Rather than focusing on a single agent, I-SPY 2 has tested 20 different drugs since its start more than a decade ago, Yee said. Additionally, patients’ tumors are assessed to determine their clinical biomarkers, with that information used to assign participants to different arms of the study. Instead of using traditional fixed randomization, this adaptive randomization allows patients entering the trial to test therapies that have already generated a complete pathological response in others with the same biomarkers.

“This is a much more efficient design to get to the answer that you want to know, and that is, ‘Is this drug effective in this situation?’” Yee said.

Roy Herbst, chief of medical oncology at the Yale Cancer Center in New Haven, Connecticut, discussed the innovative methods used in the Lung-MAP clinical trial he chairs. Lung-MAP, which is underway at more than 700 sites, is an umbrella master protocol, with sub-studies focusing on various lung cancer drugs, including targeted single agents and immunotherapy combinations. Like I-SPY 2, Lung-MAP uses biomarkers to assign patients to individual treatments.

With the trial’s overarching framework already established, sub-studies can quickly test novel therapies as they’re developed. “We are bringing drugs to patients in real time,” he said.

Herbst said establishing Lung-MAP required significant upfront planning, as well as constant adaptation. For example, he said immunotherapy became the standard second-line therapy for non-small cell lung cancer within a year of the trial’s launch, forcing the study to adapt to include immunotherapies—something that couldn’t be done with rigid traditional trial designs. “Over 10 years, we’ve constantly had to reinvent the trial,” he said.

Immunotherapies themselves also have accelerated the clinical trial process, according to Louis Weiner, director of the Georgetown Lombardi Comprehensive Cancer Center in Washington, D.C.

Most therapies directly target replicating cells, often causing side effects, so researchers try to find the maximum dose that’s safe for patients, Weiner explained. To do so, they slowly increase the dose over several trials. This process can take years, and initial participants receive an ineffective dose.

Immunotherapies, on the other hand, operate indirectly by adjusting the body’s own immune system so it attacks cancerous cells and modifies the tumor microenvironment. As a result, many standard assumptions about treatment toxicity do not apply, according to Weiner. While immunotherapies still can cause side effects, they are not related to the medication amount, so multiple doses can be explored simultaneously. This allows promising findings to quickly move to a clinical trial where all participants receive a potentially effective dose.

“We can get more drugs and more new treatment approaches into the hands of doctors to treat patients and hopefully come up with cures more readily and more effectively,” Weiner said.

All speakers agreed patient advocates play a key role in the success of these innovative trials.

“Advocates can and should be involved early and often,” said cancer survivor and patient advocate Jane Perlmutter, who served as the lead advocate on I-SPY 2.

She noted the importance of patient advocates having a seat at the table when planning trials since they think about things from the patient perspective, which may otherwise be overlooked.

“Advocates have had impact in many clinical trials,” Perlmutter said. “They have spurred on innovation and more patient centricity, and we can continue to do so.”