Coming to terms with feelings and emotions about weight gain and weight loss is often part of a cancer patient’s experience. 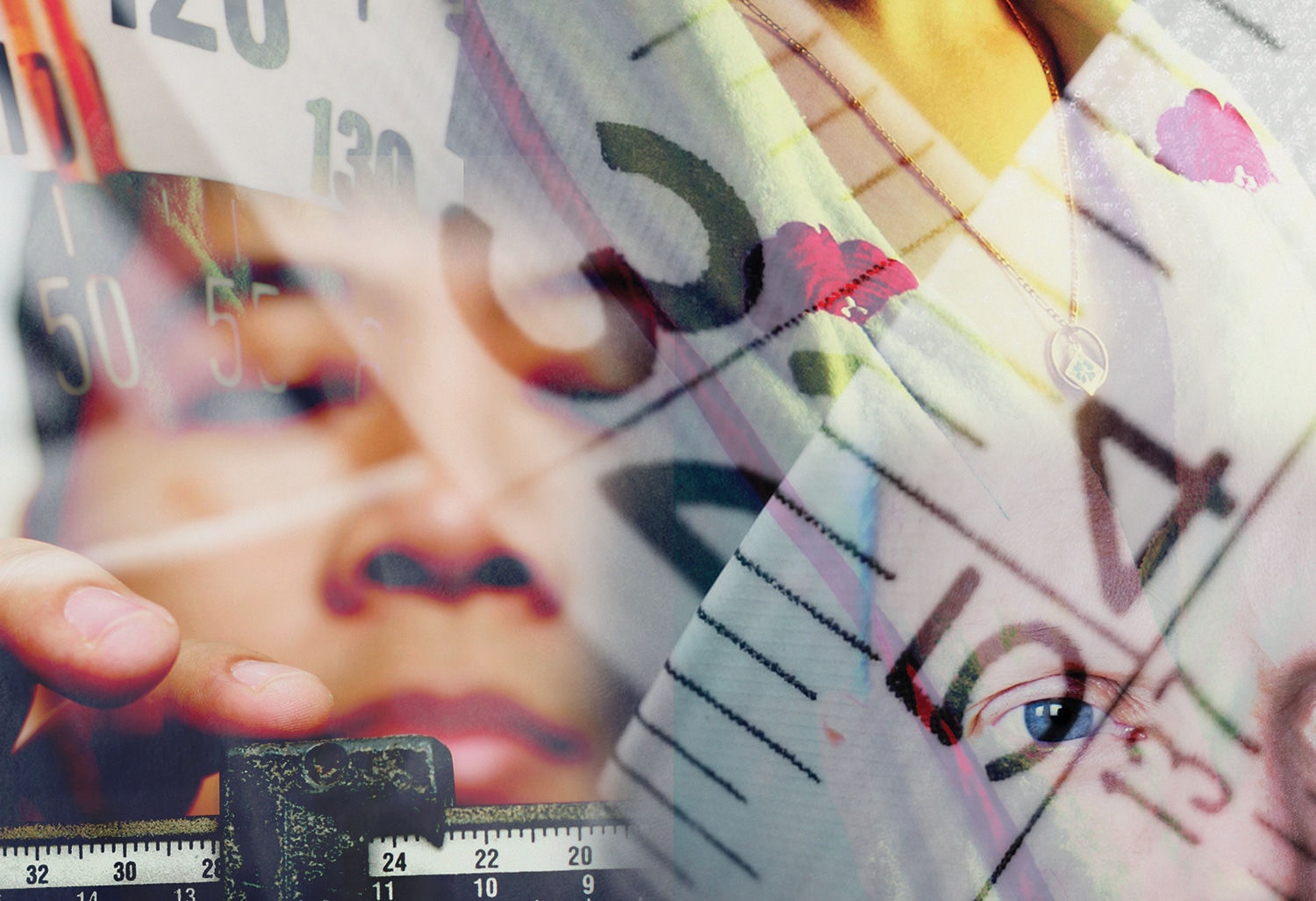 WHEN LAURA WALKER was diagnosed with breast cancer in October 2012, how much she weighed was the furthest thing from her mind. She was more concerned about the side effects of chemotherapy, surgery and radiation. Then, a year after her mastectomy, Walker, a mother of four from West Columbia, Texas, went to see a plastic surgeon at the University of Texas M. D. Anderson Cancer Center in Houston to discuss her breast reconstruction. The surgeon didn’t ask Walker to undress or take a look at her scar. “Just looking at me, she knew I was too big,” she says.

It was January 2014. Walker was 41 years old and weighed 328 pounds. Her body mass index (BMI) was 53. She had been overweight for more than a decade. To have surgery, she learned, her BMI would have to be 35 or less. “I didn’t even know what BMI was,” says Walker. “I was just living my life. I was happy. I gave no thought to what I was eating or what I weighed.” That would need to change. Her body was carrying a 100-pound obstacle that stood between her and a new right breast.

Hair loss, losing a breast, disfiguring facial surgery: These are all readily acknowledged ways in which cancer and its treatments can affect a patient’s sense of self. Weight often doesn’t make the list. Yet weight, body image and cancer are closely connected. Some patients may find cancer treatments cause unwanted weight gain. For others, stressful eating in the face of cancer can put on pounds that keep a favorite dress from zipping up or make a suit uncomfortably tight. Still others may be advised to lose weight to reduce their risk of recurrence or, like Walker, told they must lose weight to undergo reconstructive surgery.

In some ways, body image can be considered a pre-existing condition. “Some people may already come into cancer feeling self-conscious about their bodies,” says Michelle Fingeret, a clinical psychologist who runs the Body Image Research and Therapy Program at M. D. Anderson Cancer Center. “We want people to understand that whatever relationship you had with your body before cancer—if that relationship was not so healthy to begin with or if you didn’t have body image problems to begin with—you can learn to process your experience and find ways to honor and appreciate your body.”

Kim Barker’s self-image took a hit in July 2014 when she was put on a high-dose steroid to counteract brain swelling, a side effect of an immunotherapy drug she was taking in a clinical trial for her stage IIIC melanoma. Barker, now 45, had been slim and fit when she was diagnosed in October 2012. Stress stemming from her diagnosis and initial treatments had caused her to drop to 98 pounds from her pre-cancer weight of 110. Within days of starting the steroids, however, her weight ballooned to 122 pounds. The person she saw in the mirror didn’t look anything like who she thought herself to be.

“I was always petite,” says Barker, a speech pathologist in New Smyrna Beach, Florida. “Now, none of my pants fit, none of my shorts fit. I found myself wearing flouncy types of shirts that aren’t fitted and definitely not dressing up. I used to get up, take a shower, do my hair, put some makeup on so I looked nice, and that stopped completely. I pretty much wore the same thing all the time.”

Compounding the weight gain was the exhaustion, another side effect of the immunotherapy. Then one day, Barker’s now 7-year-old daughter asked her, “How come you don’t do your hair anymore?” That, says Barker, “was a real eye-opener. I had this physical shift plus an emotional shift from a lack of physical activity, and when your kids can notice it, that says something.”

Barker says it was hard to not think that others might view her as someone who didn’t eat well or work out. Even harder was the idea of talking about it. “I didn’t want anybody’s negative input. You wonder if someone would view you as being really vain, and be thinking, ‘Well, you are alive.’ And I sometimes feel that myself: What difference does it make if you don’t fit into those clothes? At least you are here.”

Fingeret doesn’t know Barker, but she says she’s spoken with many cancer patients who feel that it’s somehow wrong to be worried about their weight. “This is not about vanity,” she says. “There is a lot of guilt and shame with feeling bad about your body, and it is OK and normal to experience and think these things. I try to get patients to not shrug it off and to recognize that even though some people may not think it’s a big deal, it’s a big deal for them. This could even be the most distressing thing for them about having cancer.”

Psychologists like Fingeret help patients make sense of their experiences and develop greater body image awareness and acceptance. Patients can learn to see “that you can still appreciate and enjoy your body. It’s about acceptance. That doesn’t mean liking it. Acceptance is learning to look at your body in a whole manner and not just focusing on the weight gain itself.”

Clinical psychologist Michelle Fingeret established the Body Image Research and Therapy Program at the University of Texas M. D. Anderson Cancer Center in Houston in 2008. She advises cancer patients to:

Devora Farrell, a professional organizer and mother of five in Passaic, New Jersey, weighed about 20 pounds more than she would have liked when she was diagnosed at age 48 with stage IV breast cancer in 2010. “After my diagnosis, people asked if I would start eating kale and pomegranates and my answer was, ‘No, if I’m going, I’m going with chocolate,’ ” she says. “I even had the sick thought when I found out I needed chemo of ‘Oh, good, I’ll lose weight.’ ”

Instead, she says, she was given a steroid along with her chemotherapy. “The steroid makes you puffy and it makes you ravenously hungry, so it’s a double-edged sword. On top of that is the self-pity, and eating treats because it will make you feel better.” By the time treatment ended, she’d gained close to 25 pounds.

“I had never known myself to be vain,” says Farrell. “But something about having my body’s existence challenged made me treasure it that much more. … I decided I didn’t want to die fat. Some people would say at that point, who really cares? But I didn’t want my eating to be out of control and my appearance to look foreign to me. I wanted to live wholeheartedly as me and recognize myself.”

Farrell decided it was time for a transformation. She legally adopted her Hebrew name, changed her hairstyle, had breast reconstruction and joined a support group for people trying to lose weight. “I didn’t want to be reminded every time I looked at myself that I had cancer. I wanted to look as healthy as possible.” By changing her eating habits, she lost 45 pounds. “The first 20 came off easy. The next 25 I had to arm wrestle.” But now, she says, “I feel like I have become more of who I really am.”

Unlike Farrell, Walker wasn’t seeking a complete transformation. She wanted to have two breasts. Knowing that was now not an option, Walker did what the plastic surgeon suggested: She saw a nutritionist and started going to Weight Watchers. “I went in with an open mind,” she says, “but I didn’t think I could lose that much weight.”

She learned about portion control and healthy eating. She began to exercise. “I went to the park and walked a mile,” she says, “I thought it was the hardest thing in the world.” Each week, a pound or two came off. She started walking two miles, four days a week.

Side Effects of Treatment: Body Image

A year after her first consultation with the plastic surgeon, Walker went back for another appointment. “She was floored,” says Walker. “She kept looking at my chart and looking at me. She couldn’t understand how my BMI was 39, or how I’d lost 90 pounds. I said, ‘You told me I had to lose weight.’ ”

After that appointment, Walker decided to “up my game.” She went with a friend to a boot camp. “I didn’t w​ant to look like an idiot with people who are really fit. But I went. I hurt for a week. I didn’t want to do it. But the scale wasn’t moving, and I realized I had already done so much stuff I didn’t think I could do, so I went back. And I kept doing it.”

As a result, Walker says, 2015 has been the best year of her life. She went from the boot camp to running a 5K to doing 12-mile obstacle races. “It’s crazy,” she says. “I’m like the mom with all my clothes and granny shoes and there are all these guys with six packs. Some obstacles I don’t do. I’m obviously not getting over a 10-foot wall. But I run with my team, even though I’m way behind them.”

Walker closed out 2015 with a 26.2-mile trail run. Since she first saw the plastic surgeon, she’s lost 124 pounds and weighs 204 pounds. She expects to have her reconstructive surgery in 2016. “Losing weight is very hard,” she says. “After a year of treatment, you finally get a minute to feel normal and you don’t want to do anything else hard. Who wants to lose weight? … But when I started eating well and healthy, my body became alive. I couldn’t believe it. My trainer said it, and it’s true. Cancer literally saved my life.”