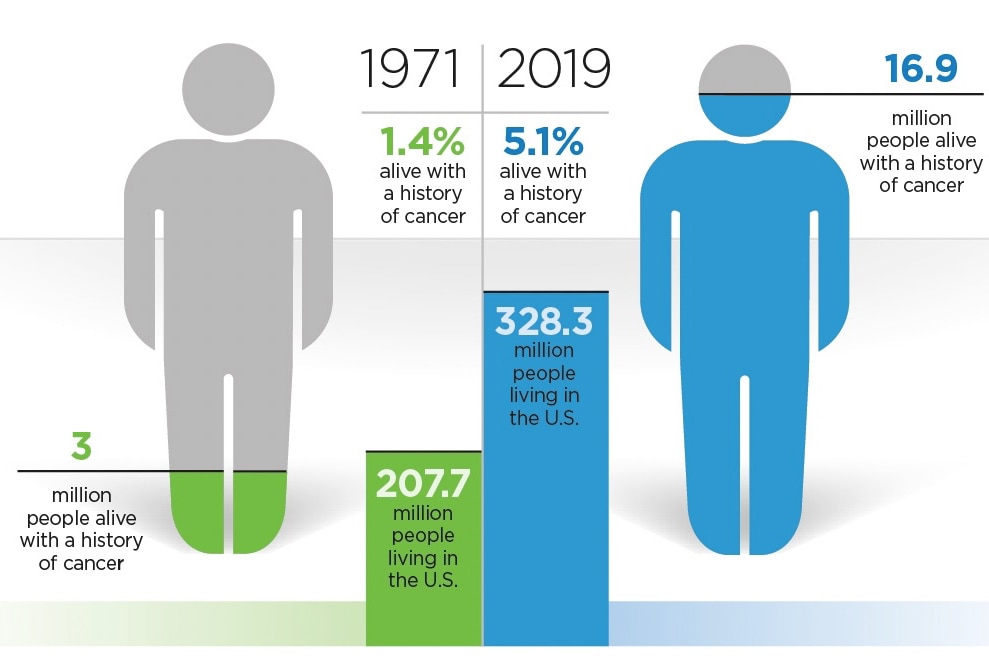 The American Cancer Society estimates that at the start of 2019, 16.9 million people with a history of cancer were living in the U.S., more than five times the number of survivors and patients who had been diagnosed with cancer when the National Cancer Act was signed in December 1971. This group has more than tripled as a proportion of U.S population—from 1.4% of the country in 1971 to 5.1% today. Images by Kovalov Anatolii / Shutterstock.com

WHEN THE NATIONAL CANCER ACT OF 1971 was signed into law 50 years ago, there were about 3 million people living with a history of cancer in the U.S.

At the time, the chances of dying from cancer had been rising throughout the century, even as new vaccines and medicines improved care for infectious diseases. The federal legislation granted greater authority to the National Cancer Institute, significantly increased the investment in cancer research and made cancer a national priority. A lot has changed in research and treatment since then, and cancer is now something that more people survive.

There are several reasons for the increase in people alive now who have a history of cancer, including the growth of the country’s population, especially in people over age 65, who have a higher risk of developing cancer than people in younger age groups. But the influx of government investment in cancer centers and research labs resulting from the National Cancer Act has advanced methods to detect cancer early, and more effective treatments have significantly reduced the percentage of people who die as a result of the disease. The mortality rate for cancer peaked in 1991 and has declined steadily through 2018, according to the American Cancer Society, amounting to an estimated 3.2 million averted cancer deaths since 1991. There is much more to be done, but the millions of people who are alive despite being diagnosed with cancer stand as a measure of the progress made in research and treatment.

The fast pace of drug discovery should be matched by modernized clinical trials for wider access.