Are You a Candidate for Immunotherapy?

Tumor testing can help determine whether certain cancers are likely to respond to immunotherapy drugs. 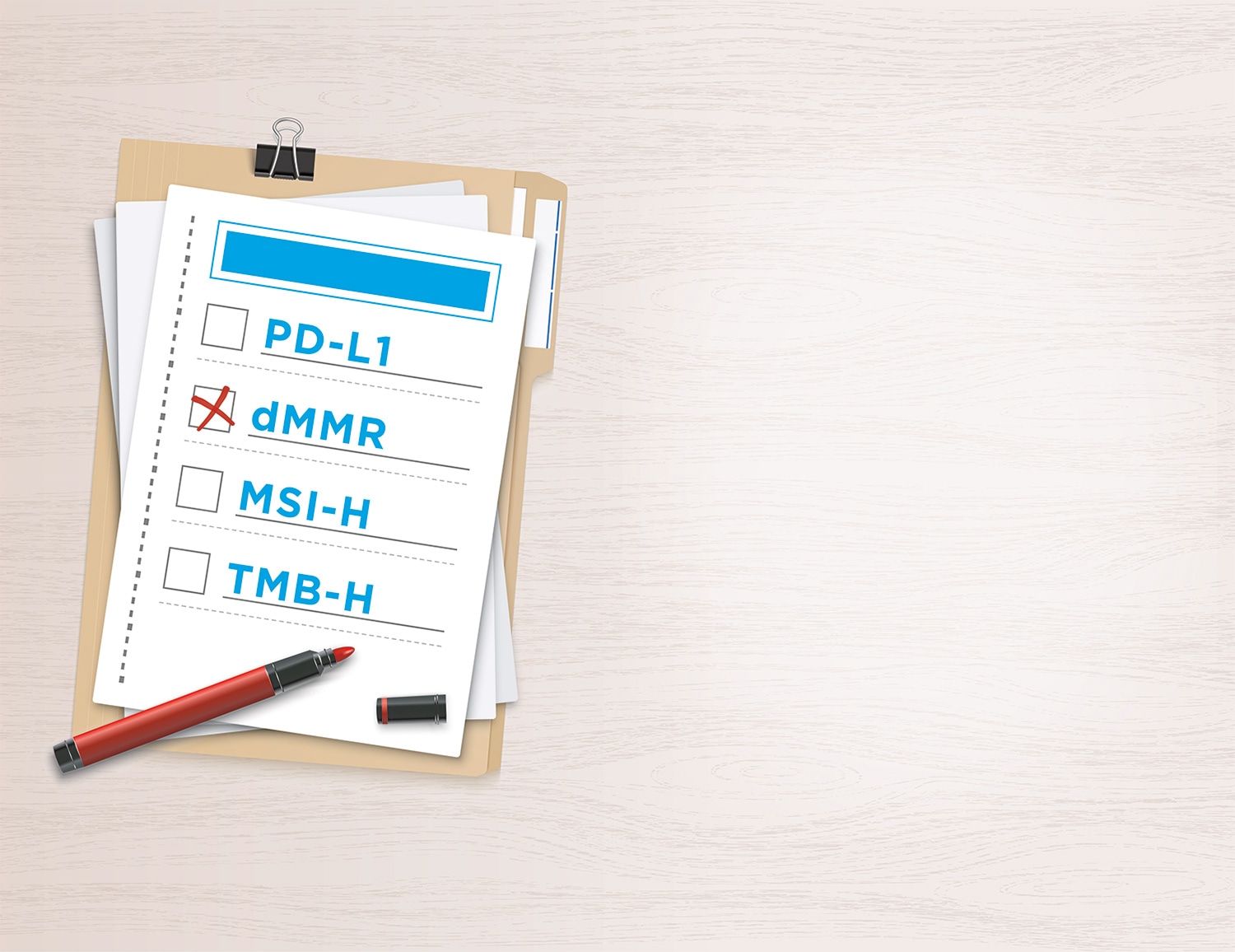 Although checkpoint inhibitors can have side effects, including diarrhea, rashes, and inflammation of the lungs or other organs, the drugs are typically associated with fewer side effects than chemotherapy. In addition, when checkpoint inhibitors are effective, patients can experience exceptional results that put otherwise untreatable late-stage cancers into remission or greatly extend patients’ lives. As one example, a study published in the March 1, 2021, issue of the Journal of Clinical Oncology showed that patients with advanced non-small cell lung cancer (NSCLC) who took the immunotherapy drug Opdivo (nivolumab) had an increased five-year survival rate, with 13.4% of patients who took Opdivo living five years or longer, compared to just 2.6% of patients taking the chemotherapy drug docetaxel.

“We’re really taking it to the next level with immunotherapy—specifically in terms of both initial response rate and long-term durability,” says Eric Walk, chief medical and scientific officer at the Roche Diagnostics campus in Tucson, Arizona, which focuses on tissue-based cancer diagnostics. “We want [these effects] to last permanently. With immunotherapy, there are preliminary signs that we might be getting there, at least for a small proportion of patients.”

But not every patient will respond or have a lasting response to immunotherapy. For example, one study, published in the May 3, 2019, issue of JAMA Network Open, estimated that nearly 44% of patients in the U.S. with cancer were eligible for treatment with checkpoint inhibitors, but only about 12.5% of those eligible patients respond to these drugs. Determining which patients are likely to have a response to checkpoint inhibitors isn’t always straightforward, particularly as these drugs are approved for more and more cancer types.

What Are Checkpoint Inhibitors?

The Food and Drug Administration (FDA) approved the first checkpoint inhibitor, Yervoy (ipilimumab), for treatment of metastatic melanoma in 2011. This drug blocks a molecule known as CTLA-4 on immune cells, which releases the brakes on the immune system. In 2014, another checkpoint inhibitor, Keytruda (pembrolizumab), which blocks the PD-1 protein on immune cells, was also approved for treating advanced or unresectable melanoma. Since then, other checkpoint inhibitors have been approved to treat various cancers, including non-small cell lung cancers and gastric cancers, and they target the same pathway, known as PD-1/PD-L1.

PD-L1 is a protein that sits on the surfaces of some cancer cells. In the healthy human body, PD-L1 binds to PD-1 on the surface of T cells, which are immune cells. This interaction acts as a safeguard, preventing the immune system from reacting too strongly and attacking its own healthy cells to cause autoimmune disorders. However, in those cancers that have PD-L1 proteins, the binding of PD-L1 and PD-1 can stop the immune system from seeing and destroying the cancer.

There are now seven PD-1/PD-L1 checkpoint inhibitor drugs approved by the FDA that interfere with this interaction. Opdivo, Keytruda, Libtayo (cemiplimab-rwlc) and Jemperli (dostarlimab-gxly) block PD-1 on T cells, while Bavencio (avelumab), Tecentriq (atezolizumab) and Imfinzi (durvalumab) block PD-L1 on cancer cells. Collectively, these drugs are approved to treat a growing list of cancers, including NSCLC and colorectal and bladder cancer. In addition, Keytruda is also approved as a tissue-agnostic therapy, meaning it can be used as a treatment for any solid tumor so long as the tumor tissue contains certain features.

One way oncologists determine whether a patient is eligible for PD-1/PD-L1 checkpoint inhibitors is by testing the tumor tissue for certain proteins or features, a process called biomarker testing. Physicians use PD-L1 testing to measure the proportion of PD-L1 in the tumor tissue to see if a patient is likely to respond to treatment.

“[PD-L1 testing is] important to select patients,” says Antoni Ribas, a medical oncologist and researcher at the Ronald Reagan UCLA Medical Center and Jonsson Comprehensive Cancer Center in Los Angeles. “If we’re giving a treatment that blocks the [PD-1] receptor or [PD-L1] ligand, it takes away this interaction.” But this is far from a guarantee that the immune system—and therefore the cancer—will respond to treatment.

If the testing doesn’t detect PD-L1 on the surface of cancer cells, it could mean the cancer will not respond to immunotherapy. It may also just mean that the PD-L1 isn’t on the cells in the tumor sample, but could still be present on other cancer cells in the body.

Complicating matters, physicians also have a range of PD-L1 tests to choose from, depending on the drug being considered as well as the type of cancer they are treating. “It’s really messy,” says Timothy Chan, a radiation oncologist and physician-scientist who is the director of the Center for Immunotherapy and Immuno-Oncology at the Cleveland Clinic. “The PD-L1 testing you send [to the lab] depends on tumor type, the drug under consideration and whether PD-L1 testing is recommended at all.”

PD-L1 tests all work similarly in that they measure the proportion of the PD-L1 protein in cells taken from a tumor sample, Walk says, but they can vary in how they measure PD-L1. Some measure only the proportion of tumor cells that carry PD-L1. Others capture PD-L1 on tumor cells as well as on immune cells within the tumor. The tests also differ in how they are scored. A positive result on one test can result from PD-L1 being present in just 1% of cells, while other tests require that 50% or more of cells have PD-L1 to be considered positive.

In addition, physicians need to keep up with a growing and sometimes changing list of approvals for these drugs. “Not only are some approvals being added, some other approvals are being taken away, so patients and providers need to stay on top of this fluid situation,” says Walk. Between February and May, four checkpoint inhibitor drug indications were withdrawn after they had received accelerated approval, when confirmatory trials intended to lead to full FDA drug approval showed the drugs did not, in fact, improve overall survival, Walk adds.

Another type of tumor testing looks for tumor mutations or genetic instability using genomic testing. Checkpoint inhibitors are also more likely to work when a cancer has many acquired mutations, making it easier for T cells to recognize cancerous cells as foreign.

What Should You Ask?

If you or a loved one has advanced cancer, here are some questions to ask your care team about immunotherapy and related testing:

Mismatch repair (MMR) testing uncovers whether tumor cells have lost a mechanism, known as mismatch repair, that acts like a spell-checker to repair DNA mistakes. Cells with this faulty repair mechanism are said to be mismatch repair deficient (dMMR). This deficiency causes a lot of changes, especially in the length of microsatellites, which are areas in the DNA that are hard for cells to copy accurately because they contain many short repeats in the DNA letters. Microsatellite instability (MSI) testing compares the lengths of DNA microsatellites in the tumor and in normal cells. MSI-high (MSI-H) tumors are found in about 15% of people with colorectal cancer, and they could indicate an inherited condition called Lynch syndrome that increases the risk of colorectal cancer in addition to other cancer types. Two drugs, Opdivo and Keytruda, have received accelerated approval for metastatic colorectal cancer that is dMMR or MSI-H.

In 2017, Keytruda was also the first immunotherapy drug to be approved for use in children and adults across cancer types so long as the tumor is dMMR or MSI-H. The drug was granted accelerated approval after research showed patients with various types of tumors having these biomarkers had an overall response rate of about 40% to the drug, and that 78% of those patients showed responses lasting six months or longer. These response rates were similar across nearly all 15 cancer types studied. On April 22, 2021, Jemperli received accelerated FDA approval for recurrent or advanced endometrial cancer that is no longer responding to platinum-containing chemotherapy, but that tests positive for dMMR.

In 2020, Keytruda was also approved for treating pediatric and adult cancers that tested positive for another biomarker, called tumor mutational burden (TMB). Measured as the number of mutations in the DNA, TMB is considered high, or TMB-H, if a tumor has 10 or more mutations per million base-pairs of DNA.

“The thing that’s cool about [these biomarkers] is that many are tumor-agnostic,” meaning that patients with many types of cancer could have these biomarkers and qualify for an immunotherapy drug, Chan says.

If a cancer is MSI-H/dMMR or TMB-H, it’s not necessary to test for PD-L1 too. But similar to PD-L1 testing, biomarkers that reflect a cancer’s genetic instability aren’t guaranteed predictors for immunotherapy response. “You can have more mutations, but it’s like having more tickets to the lottery,” Ribas says. “It doesn’t mean you will win. You just have higher chances of winning.”

Given the number of biomarker tests and the different outcomes based on tumor type, Walk stresses that patients and physicians should talk about whether immunotherapy is an option and when it makes sense to have PD-L1 or other biomarker testing.

Biomarker testing is an important guide for predicting response to checkpoint inhibitors, but there is plenty of room for improvement. That’s because other factors also influence immunotherapy response, including the presence and characteristics of immune cells in and around a tumor, other signatures of immune response, mutations or activity in other genes, and even the presence or absence of certain microbes in the gut.

Researchers are studying other ways to evaluate biomarkers, including methods that combine artificial intelligence with pathology. Chan suggests it’s possible that a more complex predictive model, capable of taking multiple factors into account at once, may better inform treatment decisions and improve outcomes in the future. But ultimately, the use of more biomarker tests in the clinic, alone or in combination, will depend on cost and other practical considerations.

Ribas points out that having more ways to test for biomarkers could help identify more patients who are likely to respond to these drugs, but it could also delay starting treatment as patients need to wait for results. In some ways, figuring out who is likely to respond is still “a big black box,” he adds. The oncologist’s best option may be to simply try a checkpoint inhibitor and see if a cancer responds.

Kendall K. Morgan is a writer based in Durham, North Carolina.

When you are diagnosed with cancer, how can you be sure you're getting appropriate care?