Many people know Roger Ebert as the Chicago Sun-Times film critic who gave movies “thumbs up” or “thumbs down” on TV with the late Gene Siskel—and later, Richard Roeper. But Ebert, who turns 70 as this issue goes to press, is also a cancer survivor.

In the last 10 years, Ebert has been treated for three different cancers: thyroid cancer, salivary gland cancer and cancer of the jaw. In 2006, to treat that last cancer, doctors removed a section of his lower jaw. There were complications, and emergency surgery left him unable to speak, eat or drink. He underwent three failed reconstructive surgeries; when offered a fourth attempt, he declined. 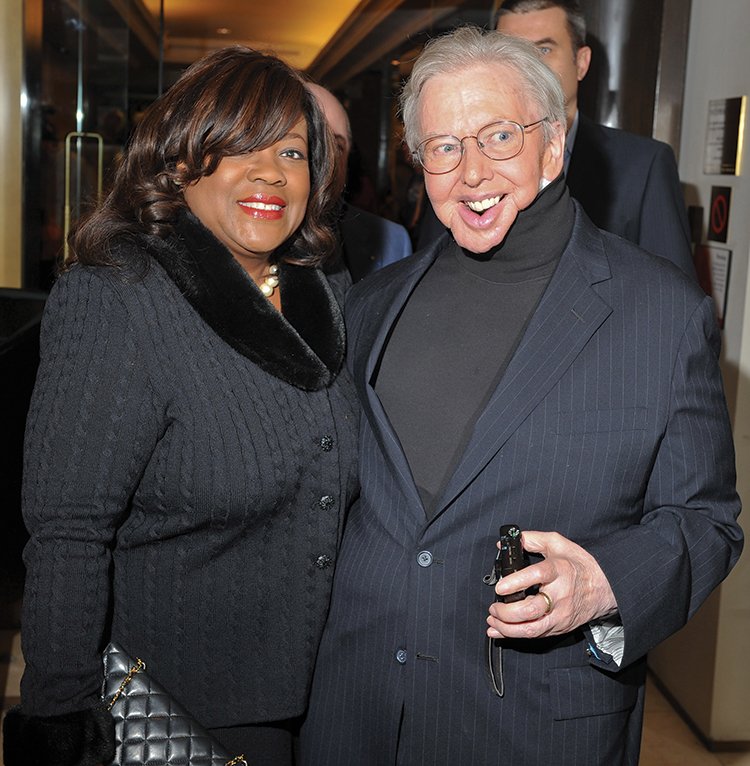 The movie critic Roger Ebert and his wife, Chaz, have been honest and open about his changed appearance following facial surgery. Photo by George Pimentel / Getty Images

After 31 years on the air as a TV movie critic, Ebert last hosted one of his shows in 2006, and he now “talks” using a computer program named Alex (he types and Alex speaks).

“Today I look like an exhibit in the Texas Chainsaw Museum,” he muses in his 2011 memoir, Life Itself. But Ebert decided he wasn’t going to hide the way he looks. In 2007, before attending his annual Overlooked Film Festival, now referred to as Ebertfest, at the University of Illinois at Urbana-Champaign, Ebert and his wife, Chaz, decided that a photograph of him should accompany a story he wrote for the Sun-Times. Later, he posed for a full-page photo that appeared in Esquire in March 2010.

“No point in denying it,” he wrote about his appearance in Life Itself. “No way to hide it. Better for it to be out there.”

In such public ways, Ebert has grappled with many of the same challenges faced by other survivors who are visibly changed by cancer surgery. “A lot of patients get very emotional when trying to get their life back together,” says psychologist Michelle Cororve Fingeret, the director of the Body Image Therapy Service at M. D. Anderson Cancer Center in Houston and a collaborator on a recent research study that surveyed the body-image concerns of surgically treated patients with head and neck cancers. The findings are scheduled for publication in the August 2012 issue of Psycho-Oncology.

Fingeret and her colleagues obtained data from 280 patients, finding that 75 percent had concerns or embarrassment about bodily changes. Participants completed two standard tests—the Body Image Scale and the Functional Assessment of Cancer Therapy Scale—along with a survey designed to evaluate body-image issues, satisfaction with care related to those issues, and interest in receiving psychosocial support for them.

“Part of the process [of recovering] involves telling yourself it’s OK to be bothered by appearance changes,” says Fingeret. “A lot of patients get down on themselves. They say, ‘I should just be happy I’m alive.’ ” She suggests that patients who are struggling with these issues talk to loved ones and then to health care providers about their concerns, slowly begin to do activities they’ve been avoiding, and participate in small social gatherings while building up to larger ones.

According to Fingeret, many patients “are concerned everyone’s looking at them or perceiving them in a certain way. I tell them they don’t know what other people are thinking.”

Ebert, who continues to make public appearances and to write reviews for the Chicago Sun-Times, has some personal insights. Cancer Today asked him some questions via email, and he responded in kind.

Q: What made you continue with the surgeries and what were your reactions when they failed?
A: There was a theory that my voice and appearance could be saved and I could appear on the television show again. I now believe that was a futile hope. My entire focus should have been on removing the cancer and prolonging my life. Today, I cannot eat, drink or speak, but that causes no actual pain. My most painful handicap is back and shoulder pain, caused by three attempts to transplant bone and tissue in facial reconstruction. I now walk uncertainly and fear falling.

Q: What made you decide against a fourth surgery?
A: When it doesn’t work three times, what are you still trying to prove? Acceptance is a wise course to take.

Q: How did you and your wife come to the decision to put your photo out there? Were you worried what people would say? And how did you feel when you saw it? In a similar vein, what went into your decision to let Esquire take your photo, and how did you feel when you saw it?
A: I was looking forward to attending my annual film festival at the University of Illinois. I was advised not to go, because paparazzi would circulate photos of my damaged face. Chaz and I decided, to hell with it, this is how I look. So I posed for photos for my paper, the Chicago Sun-Times, and wrote a story headlined, “This is the face of illness,” in which I said we spend too much effort trying to hide and deny physical realities. I paraphrased a line from the movie Raging Bull—“I ain’t a pretty boy no more.” The full-page in Esquire shocked some people, but it was real, and the article was truthful. It was a good decision to be honest and open with Chris Jones, the writer.

Q: You write in your book that a face transplant would be “an act of disloyalty to my own face.” Could you explain what you meant by that?
A: I’ve been living in and looking out of this face for 69 years. I can’t abandon it now. But I’m familiar with cases in which a face transplant is completely appropriate. It’s a personal matter.

Q: How do you feel about your looks now?
A: I don’t spend a lot of time thinking about them. My chin is a mess, but I’m alive and healthy.

Q: There must be so many people who are embarrassed to show themselves after disfiguring surgery. Do you have any advice for them?
A: How I look is my problem. I can’t be bothered with people who make it their problem. Out in public, I sense most people simply think I’ve had cancer or an accident or something, and don’t obsess about it.

A Voice at Risk

Rob Paulsen has voiced hundreds of animated characters, but as he prepared to return to a beloved role, cancer threatened his livelihood.