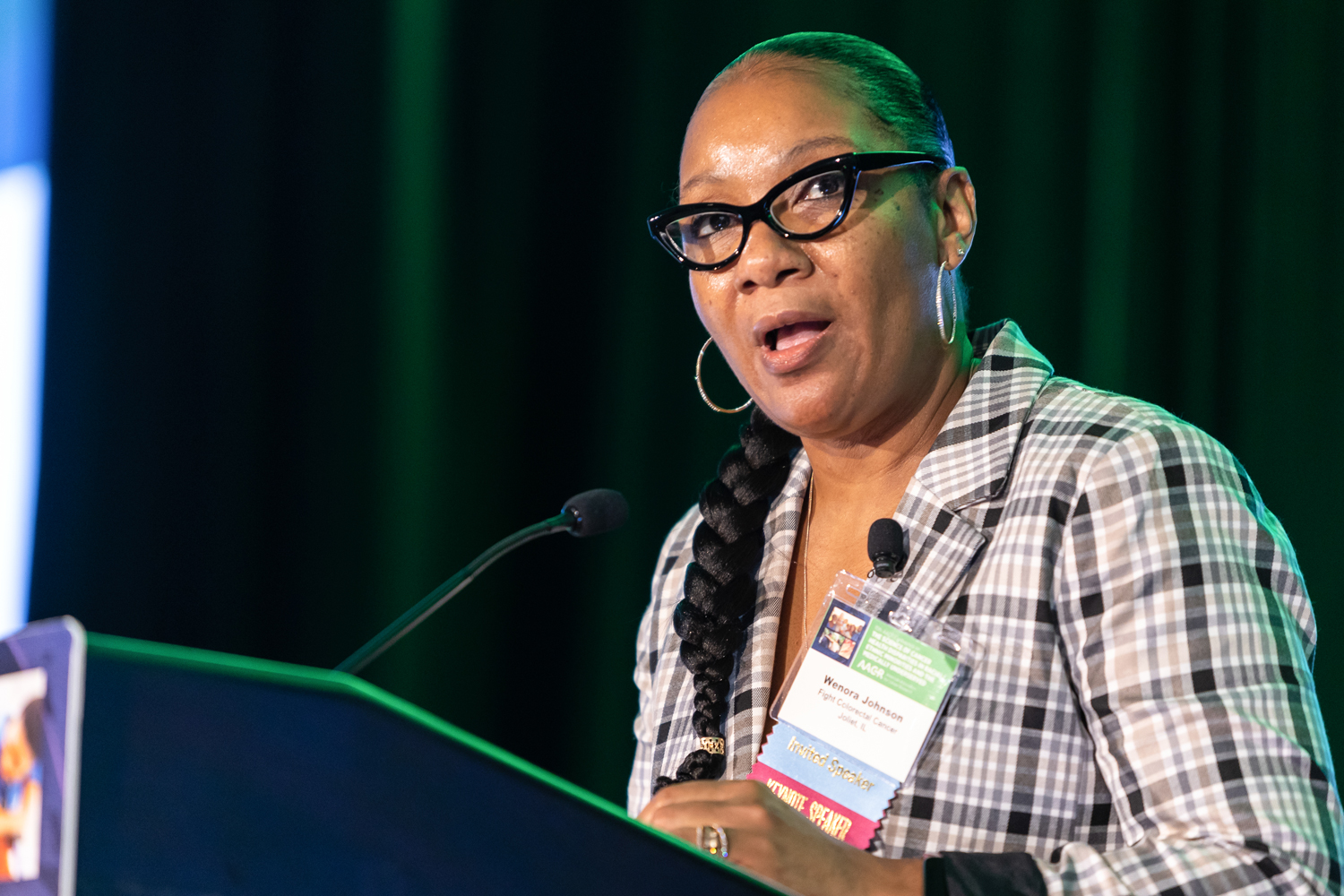 Wenora Y. Johnson delivers the patient advocate keynote address at the 15th AACR Conference on The Science of Cancer Health Disparities in Racial/Ethnic Minorities and the Medically Underserved in Philadelphia on Sept. 16. Photo courtesy of the AACR

THE SPEAKERS AT THE OPENING NIGHT of the 15th AACR Conference on The Science of Cancer Health Disparities in Racial/Ethnic Minorities and the Medically Underserved, held Sept. 16 to 19 in Philadelphia, were clear about the enormous challenges ahead in addressing cancer health disparities, but they were hopeful too. (The AACR publishes Cancer Today.) After two years of societal upheaval, they said interest in combating health disparities seems higher than ever.

Since the last time the conference was held in-person in 2019, two major events have changed how many people think about health disparities and highlighted the importance of conferences like this one, said keynote speaker and acting head of the National Cancer Institute, Douglas R. Lowy, at the conference’s opening session on Sept. 16. People saw the disproportionate burden of infection and death from COVID-19 on racial and ethnic minorities and the poor, and George Floyd’s murder in 2020 heightened awareness of the racial disparities that continue to play out in many aspects of American life. “I think the two together, plus a lot of other factors, really put disparities in general and health disparities in particular, front and center,” Lowy said.

Lowy, along with advocate keynote speaker Wenora Y. Johnson and distinguished lecturer Loic Le Marchand, opened the conference with an overview of the health disparities seen across cancer care in 2022. They recapped some of the great strides made in cancer research in the past few decades, while noting the uneven distribution of the benefits of the research, the blind spots and structural issues that have perpetuated disparities in care and outcomes, and areas the community will have to prioritize to correct these problems.

Lowy, in his keynote address, titled “Ending Cancer as We Know It—For All,” shared the good news that the U.S. is in the midst of a two-decade decline in cancer mortality rates. And in that time, cancer mortality for Black men has declined faster than any other racial or ethnic group. But hidden in the good news, Lowy noted, are persistent disparities in the overall mortality rates, as well as trends in specific cancers that disproportionately affect Black people in the U.S. “Not only [do] African American men and women have the highest rate of cancer mortality still, despite the advances, but uterine cancer death rates … are highest among Black women in the United States. They’re twice as likely to die of uterine cancer compared to other racial and ethnic groups.” Lowy said.

The importance of collecting and properly understanding the data recurred throughout the evening. Le Marchand, a cancer epidemiologist at the University of Hawaii Cancer Center, discussed how data aggregation can disguise disparities in some populations. He shared the example of Asian Americans/Pacific Islanders who, as a group, have lower lung cancer incidence rates than whites, but under that umbrella are Filipinos and Native Hawaiians, who have a substantially higher risk of lung cancer than white Americans.

There is also the concern of recruiting for clinical trials so that treatments are tested in groups that reflect the population of people affected by the diseases. Lowy brought up the example of a recent immunotherapy trial where Black patients comprised less than 1% of the participants, saying “It’s very difficult to say that this has now been tried in a widespread population.”

Lowy made clear that addressing disparities would require a significant financial investment. “Community engagement is not going to be free,” Lowy said. “But it is going to pay tremendous dividends. The return on investment will be enormous.”

Patient advocates are doing important work in making trials more accessible and diverse by providing important insights on the experience from the patient’s perspective, said Wenora Y. Johnson from Fight Colorectal Cancer and FORCE: Facing Our Risk of Cancer Empowered. She implored researchers to consider the experience of underserved communities, beyond fulfilling a numerical requirement for their studies. “The goal for cancer research is to improve outcomes for cancer patients,” she said. “To do this successfully, researchers should avoid viewing advocates and patients as symbolic requirements for their research studies. Instead, take the initiative to include them as an active member of your research community.”

Advancing that work was the focus of the doctors, researchers and advocates who spent four days at the conference. The speakers previewed many of the topics that were on the program including tackling barriers to care, diversifying the cancer research workforce, and better communicating with patients and communities.

Despite the heightened interest in cancer disparities in recent years, said AACR CEO Margaret Foti, PhD, MD (hc) during the opening session, the effort to address care of underserved populations long predates the pandemic and is ongoing.

“We have a long history of working proactively to reduce health inequities and to ensure that advances against cancer benefit all patients, regardless of their race, ethnicity, age, sexual orientation, gender identity, socioeconomic status or geographic location,” Foti said. “One of our most important initiatives has been, continues to be, our concerted efforts to eliminate cancer disparities in racial and ethnic minorities and the medically underserved.”