Cancer researchers, patient advocates and community members gathered for a public forum presented by the American Association for Cancer Research. 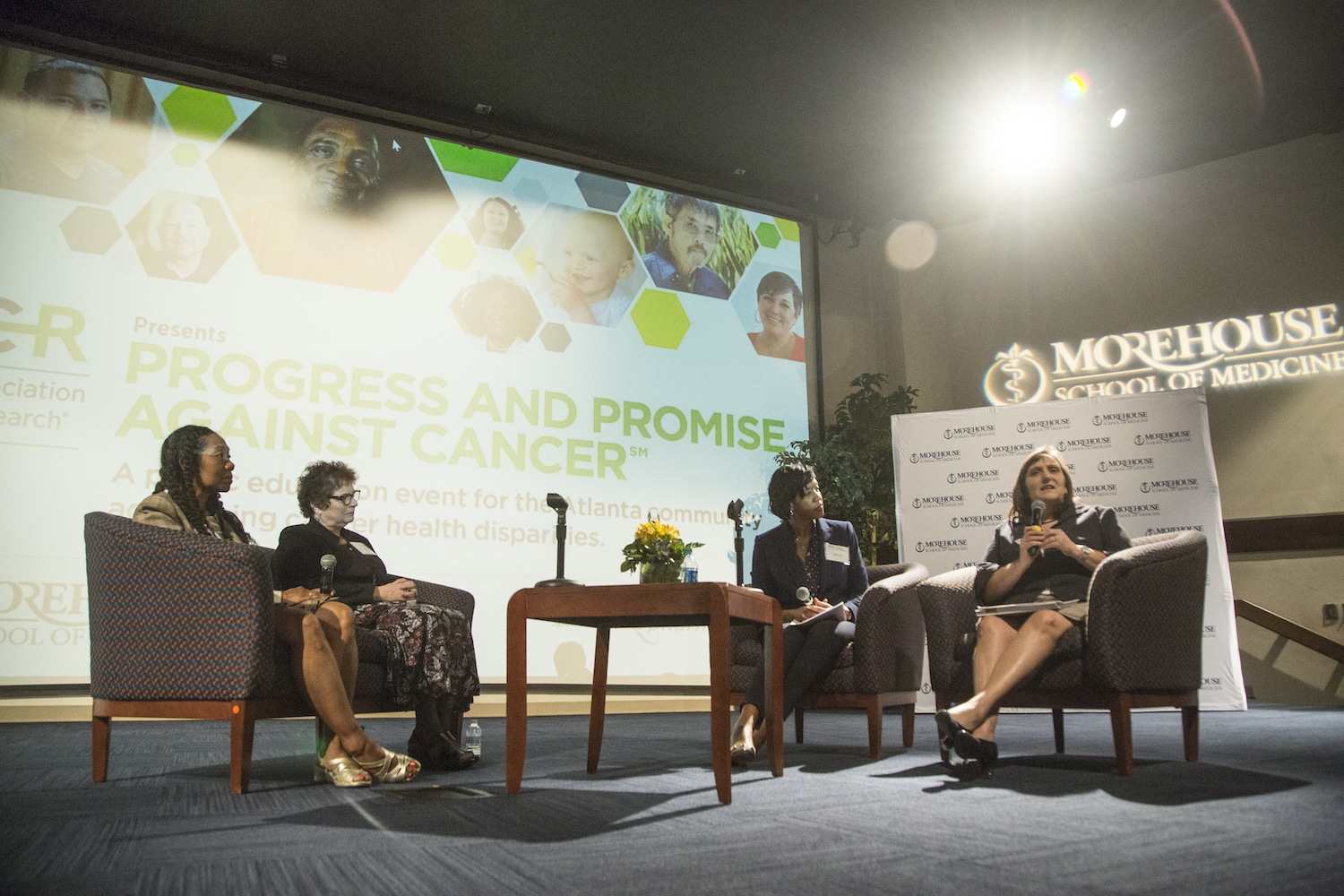 Susan M. Gapstur makes a point during a panel discussion on cancer risk reduction during "Progress and Promise Against Cancer," a public education event presented by the AACR March 30 at Morehouse School of Medicine in Atlanta. Listening from left are Kimlin Tan Ashing, Electra D. Paskett and moderator Leah Fleming. Photo by © AACR/Matt Herp 2019

More than 100 people turned out on a Saturday morning for “Progress and Promise Against Cancer,” a public education event held at Morehouse School of Medicine in Atlanta. The session, presented March 30 by the American Association for Cancer Research (AACR), offered a primer on cancer clinical trials and cancer risk reduction. (The AACR publishes Cancer Today.)

One emphasis was on cancer health disparities—differences in health outcomes due to race, income level, education, the area where one lives and other factors. Black residents make up more than 52 percent of the Atlanta population, and more than 22 percent of Atlantans live in poverty, according to the U.S. Census.

Brian M. Rivers, director of the Cancer Health Equity Institute at Morehouse School of Medicine and chair of the AACR’s Minorities in Cancer Research group, spoke early in the session on disparities. Rivers said that black men and women in the U.S. had the highest cancer death rate of any racial or ethnic group from 2011 to 2015. In Georgia, he added, cancer is the second leading cause of death at 21 percent, edged out by heart disease at 22 percent. Prostate cancer incidence among blacks in Georgia is particularly high compared to the frequency in other groups, Rivers said.

Rivers and James W. Lillard, associate dean for research at Morehouse School of Medicine, discussed 2020 by 2020​, an AACR collaborative initiative to address cancer health disparities by doing genomic testing on cancer and healthy tissue from 2,020 African-American cancer patients by the year 2020 to improve the understanding of cancer outcomes in this group.

Atlanta radio personality Leah Fleming moderated two panel discussions at the event. The first described misconceptions about clinical trials and barriers to participating in them. Shafiq A. Khan, a researcher and director of the Center for Cancer Research and Therapeutic Development at Clark Atlanta University, said people in the African-American community in Atlanta are not getting information about clinical trials, in part due to being underserved in terms of education and income, but also because of mistrust of the medical community among some African-Americans. He cited the infamous Tuskegee syphilis experiment, in which African-American men with syphilis were not treated for the condition even after an effective treatment had been found. He said researchers need to break through the barriers of suspicion and lack of knowledge by being in the community among the people they serve.

Radiation oncologist Walter J. Curran Jr., executive director of the Winship Cancer Institute at Emory University in Atlanta, added that “most patients get care without knowing about clinical trials,” although community outreach is trying to address low health literacy among patients.

Other panelists included researcher Elaine R. Mardis, AACR president-elect and co-executive director of the Institute for Genomic Medicine at Nationwide Children’s Hospital in Columbus, Ohio, and oncologist and researcher Alex A. Adjei, professor of oncology and pharmacology at the Mayo Clinic in Rochester, Minnesota. Mardis emphasized the important role that cancer patient advocates can play in bridging the gap between researchers and patients. Adjei said doctors and researchers need to do a better job of explaining clinical trials to their patients.

To illustrate how that can be done effectively, gynecologic oncologist Roland Matthews, chair of obstetrics and gynecology at Morehouse School of Medicine, and ovarian cancer survivor and advocate Kimberly Richardson role-played a doctor telling a patient about a cancer recurrence and inviting her to participate in a clinical trial.

The second panel session covered cancer risk reduction. Participants included Kimlin Tam Ashing, founding director of the Center of Community Alliance for Research and Education at the City of Hope Medical Center in Duarte, California. Ashing said only about 15 percent of cancers are hereditary and that most people can lower their cancer risk by eliminating or reducing behaviors such as smoking, alcohol use, poor diet and nutrition, and lack of physical activity. She acknowledged that recognizing these behaviors is easier than modifying them.

Susan M. Gapstur, senior vice president of behavioral epidemiology research for the American Cancer Society in Atlanta, focused on alcohol use as the third leading cause of cancer after smoking and excess body weight. Alcohol is a factor in 6 percent of all cancers in the U.S. and 16 percent of breast cancers, she said. Electra D. Paskett, director of the Center for Cancer Health Equity at the Ohio State University Comprehensive Cancer Center in Columbus, emphasized the importance of vaccinations against human papillomavirus, which can cause cervical and other cancers and is fully preventable with proper vaccinations. Less than half of adolescents are on schedule for their vaccinations, she said.

Other speakers at the community event included former NFL player Chris Draft, who discussed his role as a lung cancer patient advocate after his wife was diagnosed with lung cancer at age 37 in 2010 and died a year later of the disease. Draft said his wife was tested to see if she would be eligible for new treatments that were available at the time, but she didn’t qualify for them. Breast cancer survivor and advocate Angie Patterson, vice president of the George Center for Oncology Research and Education in Atlanta, described her experience being diagnosed with and treated for breast cancer in 2001. “That was the day I became a breast cancer survivor,” she said.

About a dozen cancer-related organizations from Georgia and around the country provided educational materials in an exhibitor area.​​​​