Risk in the Air

Air pollution can increase a person’s risk of developing cancer, a burden that isn’t shared equally in every neighborhood. 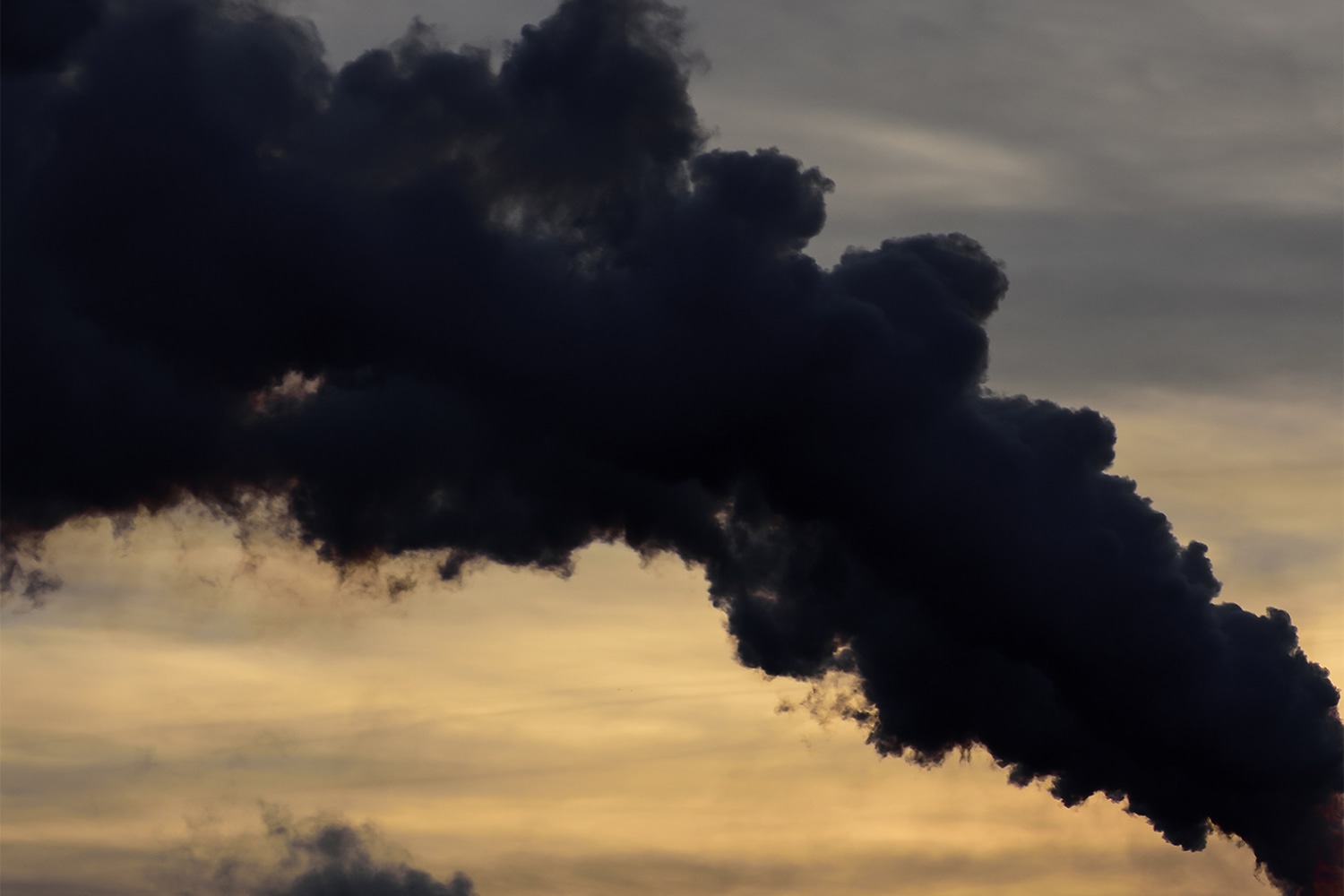 EXPOSURE TO AIR POLLUTION is a risk factor for many health conditions, such as asthma, chronic obstructive pulmonary disease and lung cancer. Minority populations including Black, Latino and poorer people not only exhibit higher rates of such conditions, but are more likely to live in areas where higher levels of air pollution are recorded compared to wealthier, whiter neighborhoods.

Correlations between health disparities and air pollution have been observed for decades, but a study published in August in Cancer Epidemiology, Biomarkers & Prevention digs deeper into the relationship among air pollution, lung cancer and the places where minority populations live. The paper adds weight to previous findings on the connection between air pollution and non-small cell lung cancer (NSCLC), while also linking certain types of pollution with more aggressive cancers.

Researchers examined the records of 478 patients treated for NSCLC at the City of Hope Medical Center in Duarte, California, between 2015 and 2018. They found the levels of PM2.5 air pollution, a measure of particulate matter in the air, in places where the patients lived correlated with the likelihood that their cancers had the TP53 mutation, which makes cancers more aggressive. Of the 277 patients who had the mutation, 110 lived in neighborhoods with levels of PM2.5 air pollution defined as “moderate” by the Environmental Protection Agency (EPA), a categorization that denotes air quality that may cause a risk to some, particularly those who are unusually sensitive to air pollution. The researchers found that this association persisted even after adjusting for other variables, such as whether and how much patients smoked.

Cancer Today spoke with study co-author Loretta Erhunmwunsee, a thoracic surgeon and assistant professor in the division of health equities at City of Hope about air pollution, health inequities and the implications of the study’s findings for patient care.

CT: What led you to conduct this study at this time?
ERHUNMWUNSEE: Social determinants impact outcomes in lung cancer. It’s not just smoking—it is the environment and where people live. And I really started thinking about why. Why is it that your environment can impact your risk of lung cancer or your survival from lung cancer? Maybe there is a link between the environment or the social conditions where a person is living and their biology.

And so that was the hypothesis. We started looking at the patients at City of Hope, and we noticed that the environment, as related to the amount of pollution exposure, was in fact associated with an aggressive [cancer] mutation. We continue to evaluate it, because it could help explain why poor people and Black people and brown people who live in these areas might have worse outcomes.

These particles come from cars, they come from factories, they even come from agricultural work. They’re in our homes from cooking and they can also come from smoking. Anything that releases matter into the air can contribute to particulate matter.

We also know that [exposure to] this particulate manner is correlated with those who have lower socioeconomic status and is associated with underrepresented minorities. There have been papers that have shown that PM2.5 is seen at higher rates in African American and Latino communities, for instance.

CT: What is the TP53 gene and how are TP53 mutations related to aggressive cancers and air pollution?
ERHUNMWUNSEE: TP53 is a tumor suppressor and, in essence, it is a gene whose job it is to suppress growth. When it sees that there is any sort of growth happening that is inappropriate, its job is to suppress it. When it is mutated, it loses the ability to suppress that growth, or to suppress other changes that could lead to tumors.

It’s important to understand that because we all have the TP53 gene, its mutation can lead to many different types of cancers. Obviously, as a lung cancer surgeon, I was looking specifically at TP53 mutations in lung cancer, but there are TP53 mutations in colon cancer and other cancers as well.

CT: The EPA considers moderate PM2.5 concentrations of 12 micrograms per cubic meter to be acceptable, but you found reasons in your study to suspect that limit is set too high. Why?
ERHUNMWUNSEE: The concentration of PM2.5 that EPA says is acceptable falls into the same range that we found was associated with increased rates of the TP53 mutation. We maybe need to reconsider what acceptable means. Because if this acceptable range is associated with an aggressive mutation, then that’s problematic, and in fact can still lead to poor health and lung cancer deaths.

I think we are starting to more fully understand the importance of clean air because of data like this. It’s going to be important for us to discuss policy impact, and so we need our legislators to understand that they need to be in dialogue with the medical and scientific communities.

CT: You looked at almost 500 NSCLC patients at City of Hope over three years, assessed whether they had TP53 mutations, and then checked the levels of PM2.5 air pollution measured by the EPA in the places they lived. What did you find?
ERHUNMWUNSEE: We also looked at many other factors including their smoking, their race and their gender. We looked at the neighborhood income and education. We looked at several different factors, and we found that air pollution was correlated with the TP53 mutation, even when you control for everything else.

We also found that those who live in polluted areas were more likely to be African American or Latino and to have lower incomes.

CT: What are some systemic changes or policy changes that could help mitigate these health inequalities? What should people keep in mind when they are voting or speaking with their representatives?
ERHUNMWUNSEE: Here’s the truth—as a nation, we should be proud that our air pollution levels have actually fallen over the last several decades, which is awesome. But over the last several years, there’s been an uptick in air pollution exposure because our clean air regulations were pulled back by the previous administration.

That impact is going to be most profound in underrepresented minorities and in poor communities. When you roll back clean air regulations, everyone can be impacted. But specifically, it’s going to be those who are already marginalized.

We’ve got to continue to push forward, and discuss, and vote along those lines so that our legislators know that we care about air pollution, and we want clean air regulations to continue to be [enforced] at the highest level. We also need to understand and give even more support to marginalized groups to protect them from the exposures that are killing them at higher rates.

CT: Setting aside the systemic solutions, how should individuals digest and make use of your findings? How might oncologists use this information to better treat their patients, for instance, and how might patients better use it to protect their own health and that of their families?
ERHUNMWUNSEE: Oncologists and primary care physicians, pulmonologists and cardiologists need to understand that air pollution and PM2.5 are risk factors. And they need to dialogue with their patients about what to do to limit their exposure.

When you have a patient who comes in who has heart disease and you know they’re smoking, you can say to them, “OK, your smoking is contributing to your heart issue.” We need to be able to frame air pollution in the same way: “Hey, look, we know that air pollution is a risk factor, it can lead to more aggressive lung cancer, based on what we found.”

I think for individuals it is very similar. They can monitor the particulate matter concentration outdoors with apps or even via the Weather Channel, and potentially consider limiting their time outdoors if the PM2.5 is high or closing their windows and doors on those days. They’ve got to understand the truth about this and be knowledgeable about the legislators who have so much power in regard to cleaning our air.

Note: This interview has been edited and condensed for clarity.​​​