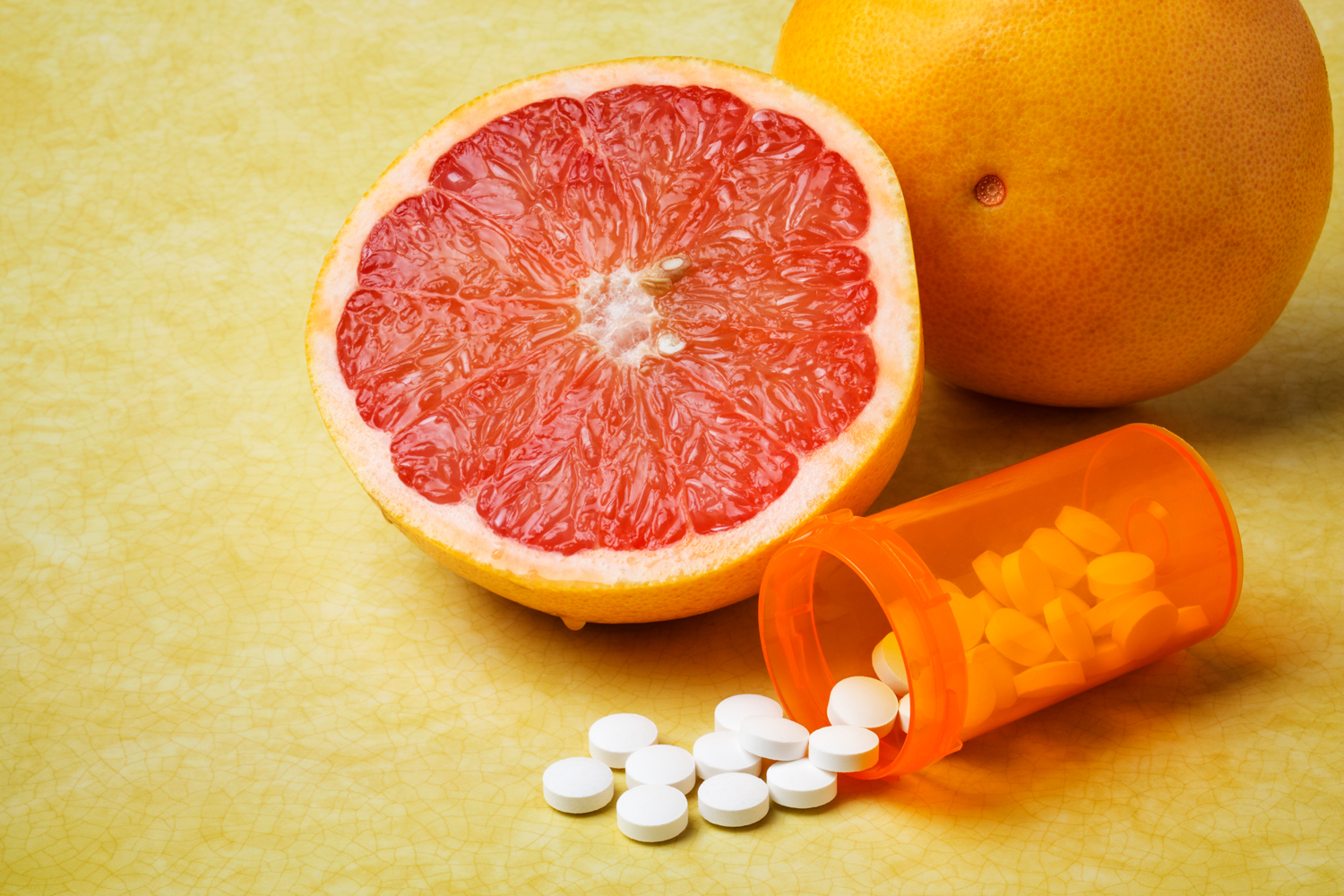 IT IS UNUSUAL THAT A FRUIT with significant health benefits could also be dangerous for some people to eat. “But that’s the case with grapefruit,” says David Bailey, a clinical pharmacologist and scientist at Lawson Health Research Institute in London, Ontario. Bailey is the researcher who discovered over 30 years ago that grapefruit interacts with many common medications taken by mouth, including several oral cancer drugs. If you take one of the affected drugs, you’ve probably noticed a warning on the bottle’s label or in the patient information guide from the pharmacy.

Grapefruit contains compounds called furanocoumarins that inactivate the CYP3A4 enzyme in your intestine. “That enzyme metabolizes certain oral drugs, so blocking its action means more of the drug enters your blood,” Bailey explains. “Even small amounts of furanocoumarins can cause dangerous levels of some drugs to build up in your blood.”

A 1998 research review he and his team published in the British Journal of Clinical Pharmacology reported that just 250 milliliters (about 8 ounces) of grapefruit juice multiplied drug levels in the blood up to three times compared with water. Drinking the juice three times a day for five days further increased drug levels by as much as five times. “Combining grapefruit with certain drugs can potentially cause toxic side effects. In the worst-case scenario, grapefruit can be deadly when combined with some of these medications,” he says.

Grapefruit isn’t alone in containing furanocoumarins. Tangelos, pomelos, limes and bitter Seville oranges (often used in orange marmalade) also have them. Of these, grapefruit has been studied the most because it’s commonly consumed in large enough quantities to cause a reaction. And it’s not just the juice but also the fruit and rind that can be problematic. “Sweet Valencia or navel oranges do not contain these compounds and are safe substitutes,” he says.

According to Bailey, one of the most severe side effects of furanocoumarins is an irregular heartbeat called Torsade de Pointes, which can cause sudden death. He notes that other potential side effects include gastrointestinal bleeding, kidney damage, breathing problems and rhabdomyolysis, a condition where muscle tissue breaks down.

However, he says furanocoumarins can affect everyone differently. “Some people make more of the CYP3A4 enzyme than others. Those with more CYP3A4 in their small intestine are at greater risk of drug toxicity [if they consume grapefruit]. But without testing, it’s impossible to predict who will be affected by grapefruit,” he says. Because the degree of interaction is so variable, doctors and pharmacists recommend that anyone taking an affected drug avoid grapefruit and related fruits.

In 1989, when Bailey and his team discovered the grapefruit interaction, 85 drugs were on the interaction list. Today, that list is up to 121 medications. They range from heart and blood pressure drugs to antianxiety medicines to a growing list of anticancer drugs. The interaction is drug-specific, so not all medications within a class are affected. Some common drugs that interact with furanocoumarins include:

According to Bailey, “Sixty percent of the drugs that interact with grapefruit juice are high-risk, with potentially severe adverse reactions. And of those high-risk drugs, 27 are kinase inhibitors, oral medications used in cancer treatment.”

As cancer treatments evolve, significantly more oral anticancer drugs are being used. “The number of oral cancer drugs that interact with grapefruit has increased tremendously over the past decade. These drugs treat a wide range of cancers, so more and more patients are at risk,” says Ezra Cohen, an oncologist at the University of California, San Diego. He also points out that the grapefruit effect is long-lasting. “It can take up to 60 hours for the CYP3A4 enzyme to become fully effective again after drinking grapefruit juice,” he says. “It’s not unheard of for a patient to accidentally eat a grapefruit and report drug toxicity symptoms a day or two later.”

In 2012, Cohen led a clinical study to see if cancer patients could use the grapefruit effect to their advantage. He examined whether grapefruit juice could be used to intentionally boost the potency of a cancer drug, thus decreasing the amount needed for treatment—and it worked. The study, published in the American Association for Cancer Research (AACR) journal Clinical Cancer Research, showed that drinking 8 ounces of grapefruit juice daily boosted levels of the drug Rapamune (sirolimus) by 350 percent. (The AACR also publishes Cancer Today.)

While the results were exciting, he notes that getting a consistent effect from grapefruit is challenging. “Besides the variability in CYP3A4 enzyme among people, furanocoumarin content also varies with grapefruit varieties and juice-processing methods,” he explains. Still, he says, “it’s something to consider on a case-by-case basis if there is a need to reduce a medication dose to minimize side effects or control cost. But grapefruit should only be used under strict medical supervision where drug levels can be monitored because of the risk of toxicity.”

Cohen stresses that “the grapefruit interaction warning appears on certain cancer and other medication labels for an important reason. Unless your doctor advises otherwise, steer clear of grapefruit while on these drugs.” If you are unsure whether your medicines interact with grapefruit, ask your oncologist or pharmacist.

Anne Danahy is a registered dietitian and freelance health writer based in Scottsdale, Arizona.

Editor’s Note: Cancer Today is sad to report that shortly after being interviewed for this story, David Bailey died at his home in London, Ontario. The Cancer Today staff sends our condolences to his family and all who are affected by this loss.