Join our Facebook group to talk about themes in the poignant memoir by Paul Kalanithi. 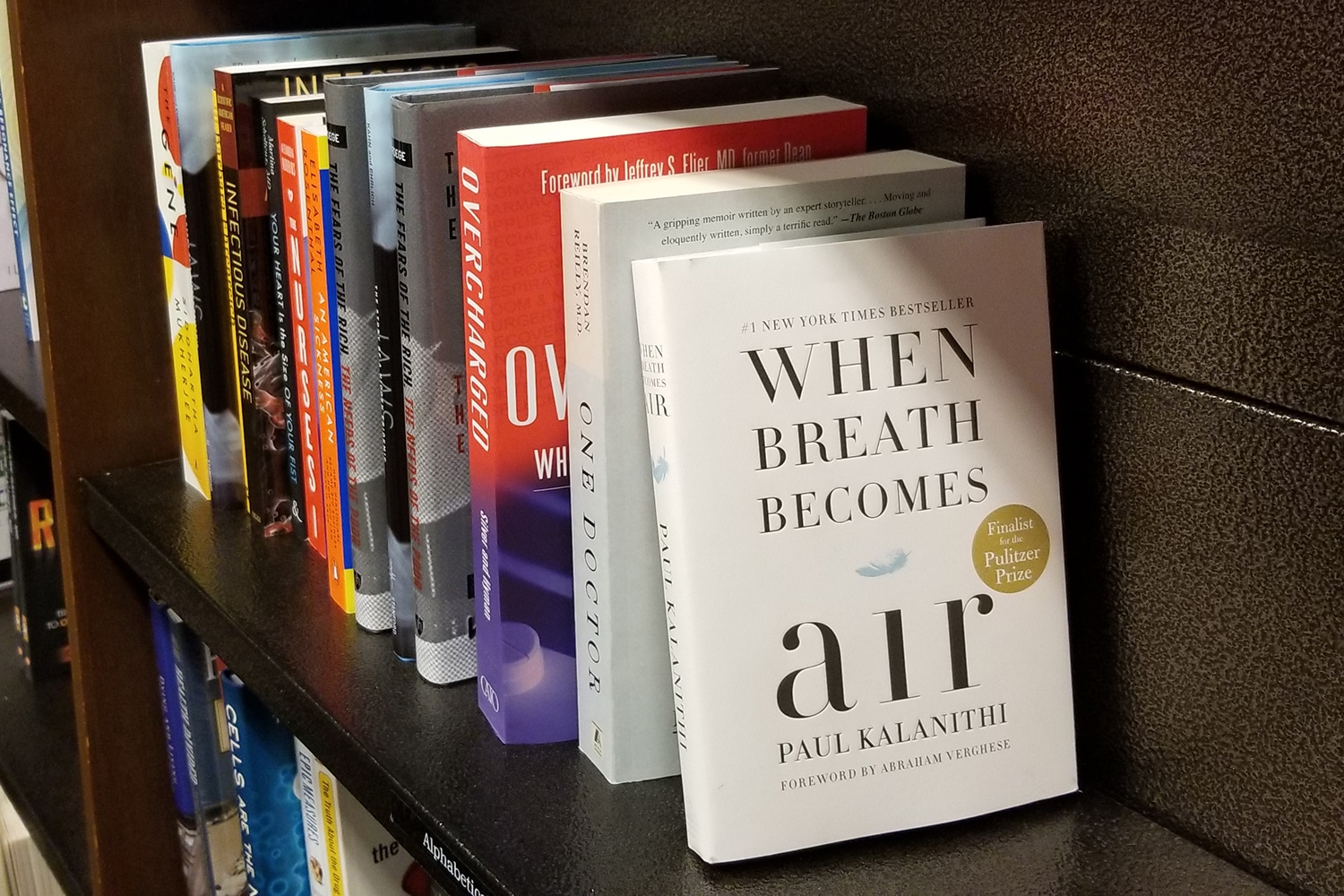 The Cancer Today Book Club is discussing When Breath Becomes Air by Paul Kalanithi through Sept. 21, 2018. Photo by Marci A. Landsmann

EACH QUARTER, ​Cancer Today editors highlight a book we think will offer insights for people affected by cancer. Through Sept. 21, 2018, we will discuss When Breath Becomes Air, a memoir by Paul Kalanithi, a promising physician who was diagnosed with stage IV lung cancer at age 36 in the final year of his neurosurgery residency.  ​


Paul Kalanithi’s widow, Lucy, will be answering your questions in a Facebook Live interview on Aug. 22, 2018 at 2 p.m. EDT. Join our Facebook group for more details and to contribute to the conversation.​

Writing in the prose of a philosopher-poet, Kalanithi, who died from his disease on March  9, 2015, eloquently described the uncertainty that comes in his quest for excellence in the practice of medicine. At what point is a physician morally obligated to not intercede to save someone’s life? How does one break devastating news to a patient with a brain tumor and map out next steps forward? Above all, in striving for perfection, how does a physician honor a patient’s identity and wishes?

Over the course of the next three months, Cancer Today will be posting the following questions in our Facebook group to spark conversation about the themes Kalanithi explored in the book. Participants in the book club are encouraged to review the questions in advance, ask their own questions and join the conversation.

​1) The prologue starts with Paul Kalanithi, a neurosurgical resident, flipping through his own CT scan images that show “widely disseminated” tumors in the lungs, spine and liver. In what ways were his experiences like any other patient’s? Are they different as well?

2) Six months before his diagnosis, Kalanithi suspected he had cancer, but he went along with the physician’s assessment of isthmic spondylolisthesis, a frequent cause of back pain in young people. He agreed to the doctor ordering X-rays and not an MRI. Do you find Kalanithi’s experience and misdiagnosis surprising?

4) Kalanithi wrote about working with a cadaver as a medical rite of passage. What do you think of his description of this initiation?

5) As he was about to enter his sophomore year in college, Kalanithi turned down a prestigious opportunity to work at Yerkes National Primate Research Center and decided to become a prep chef at Stanford Sierra Camp, a family vacation spot for Stanford alumni. He likened the choice to deciding between studying life or experiencing it. Do you think Kalanithi, the neurosurgical resident, would have made the same choice?

6) What stuck with you from Kalanithi’s description of the premature delivery of twins who did not survive and the delivery of a healthy baby girl?

7) Kalanithi described a friend in medical school who was hit by a car—which caused him to remember all his own occasions of “failed empathy” as a physician. Given his ideals, the grueling hours, difficult decisions and the volume of patients he saw, do you find these so-called failed occasions understandable?

8) Kalanithi vowed to help guide patients in accordance with their values—using an informed consent form as the start for deeper conversation. Do patients and physicians have enough of these types of conversations?

9) Kalanithi described working at a Stanford lab for basic motor neuroscience during his residency. The head of the lab undergoes Whipple surgery, chemotherapy and radiation for pancreatic cancer, but also mentions previous doubts about the suffering being worth it. Do you think it’s possible for physicians to understand the toll of treatments without experiencing them?

10) Kalanithi wrote details about his patients and their stories. Some outcomes were expected. Others were not. What stories resonated with you? What do these stories tell us about practicing medicine?

11) At the end of Part I, Kalanithi got news about his friend, a resident who killed himself. What are your thoughts on how he processed and wrote about this death?

1) Kalanithi wrote about the “life-shattering” news of his diagnosis as “less like an epiphany—a piercing burst of light, illuminating What Really Matters—and more like someone had just firebombed the path forward.” Can you relate to this description? Is a cancer diagnosis ever an “epiphany”?

3) Kalanithi noted that “detailed statistics are not for hospital rooms.” He also wrote that a physician must be accurate but leave patients room for hope. This assessment, given from a physician’s point of view, changed when Kalanithi became a patient who wanted to know the Kaplan-Meier survival curve. Still, Kalanithi’s oncologist refused to talk about survival statistics.  Are statistics helpful when processing a diagnosis? Can they be harmful?

4) Kalanithi and his wife, Lucy, decided to have a baby despite knowing that Kalanithi might not live long. How important is continuing with life plans in the face of a terminal diagnosis? In the same circumstances, do you see yourself making a similar choice?

5) Kalanithi wrote, “Maybe in the absence of certainty, we should just assume that we’re going to live a long time. Maybe that’s the only way forward.” Is denial also a form of hope?

6) Kalanithi wrote about the compelling elements of Christianity—sacrifice, redemption, forgiveness—and the tension between mercy and justice. How do these themes play into Kalanithi’s reasons for being a doctor?

7) Emma, Kalanithi’s oncologist, continued to ask Kalanithi to think about what was personally important. Do you think experiencing cancer makes this question easier to answer?

8) Kalanithi came to look forward to his discussions with his oncologist. Have you had similar experiences with health care providers? Is it difficult for physicians and patients to foster these types of relationship?

9) Kalanithi’s final chapter ends with him describing the gift of his daughter, Cady, who brings him unquestionable and satisfying joy. Despite him not being able to complete the book because of his death, what do you think of his description of Cady’s arrival in the context of his search for meaning?

10) After Kalanithi’s death, his widow, Lucy, wrote the epilogue of the book, describing Kalanithi’s final months and hours. What insight did you gain from Kalanithi’s choices leading up to his death? What inspiration did you get from his story?

11) In the epilogue, Lucy describes Kalanithi’s ability to confront death as brave. Why do you think it might be considered brave to talk about death? Why are discussions about death so taboo?

12) Lucy predicts that if Kalanithi were still alive, he would have helped many people as a neurosurgeon. But she also states that the book would help him continue to make contributions. Did you find the book personally helpful?

13) In the beginning of the book, Kalanithi was open about his and Lucy’s marital troubles. Prior to receiving his diagnosis, Kalanithi predicted things would become more manageable after he completed his final year of residency. He wrote, “I could see myself finally becoming the husband I’d promised to be.” Later in the book, he noted that he and Lucy were and always had been deeply in love and that cancer saved their marriage. Can a cancer diagnosis help to “save a marriage”? Can it also have the opposite effect?​

14) In the foreword, Abraham Verghese, a critically acclaimed author and doctor who writes about medicine, describes his single meeting with Kalanithi. It wasn’t until reading the memoir that Verghese says he came to know Kalanithi “more fully than if I had been blessed to call him a friend.” What are your impressions of Kalanithi as a physician and person after reading the book? Can you think of a time when hearing a person’s story after death changed or advanced your own understanding of them in some way?

To foster more discussion, Kalanithi’s widow, Lucy, offered her perspective in a Q&A published in the summer issu​e of Cancer Today.  She believes that a patient’s values and identity are keys to making health care decisions, and she advocates for increasing discussions around end-of-life planning. ​