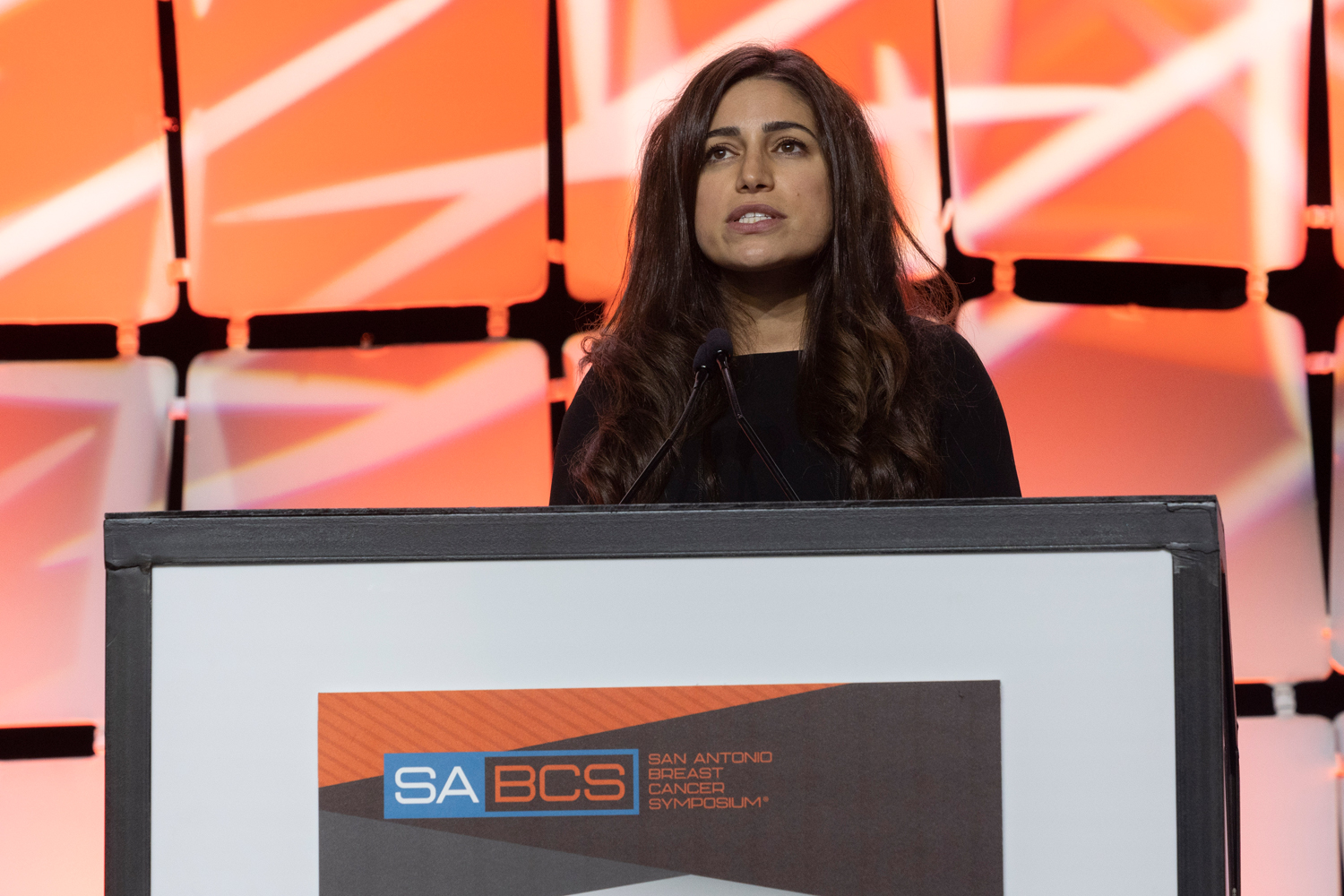 Yara Abdou presents results from a study of breast cancer outcomes across racial and ethnic groups in the RxPONDER trial at the 2022 San Antonio Breast Cancer Symposium. Photo courtesy of SABCS / Todd Buchanan 2022

BLACK WOMEN WITH BREAST CANCER had worse outcomes compared with white women even when researchers controlled for age, menopausal status, tumor grade, and a recurrence score from a 21-gene tumor profiling test, in a recent study presented Dec. 6 at the San Antonio Breast Cancer Symposium (SABCS).

The study analyzed the treatment and outcomes of 4,048 women with early-stage hormone receptor-positive breast cancer and a recurrence score of 25 or lower from the RxPONDER trial. The main findings of the RxPONDER trial, reported at SABCS in 2021, were on the value of recurrence scores for determining the need for chemotherapy in women with breast cancer that had been found in up to three lymph nodes.

“Racial disparities in breast cancer outcomes continue to be a major health care challenge, with Black women more likely to die from the disease than non-Black women,” said presenter Yara Abdou in a press release. Abdou is an oncologist at UNC Lineberger Comprehensive Cancer Center in Chapel Hill, North Carolina.

Abdou presented a series of findings that showed the disparity’s presence both in any cancer returning and in cancer traveling to other parts of the body, even as researchers controlled for important factors such as menopausal status and recurrence score. She noted that the patients and features of the cancer were similar across racial and ethnic groups. Though Black women in the study were more likely to have cancers of a higher grade, the number of women with recurrence scores 13 or lower and those with scores 14 to 25 were the same across Black women and white women. Black women were also less likely to have been given anthracycline chemotherapy.

One factor that somewhat mitigated the disparity in outcomes was controlling for body mass index, which did not make the disparity go away but did result in a smaller difference and one that was not statistically significant.

“In accordance with previous studies, our results indicate racial disparities in breast cancer, particularly in HR-positive breast cancer. These differences were observed despite analyzing a carefully chosen and uniformly treated study population, suggesting that biological factors other than disparities in care may be contributing to inferior outcomes in racial minorities,” Abdou said in the release.

The study found that Black participants were more likely to accept the treatment assigned to them and were just as likely to still be taking hormonal therapy after a year: 96% of Black women were still taking their treatment compared with 94.8% of white women. Abdou said this suggests that the disparity was not an effect of people not taking the recommended treatment, but more research should be done into treatment adherence past the first year.

Abdou reported that researchers were not able to reach definite conclusions about treatment benefit because of the small number of Black participants in the trial, an ongoing challenge in clinical research. Researchers also left Native American/Pacific Islander participants out of the analysis for the same reason.

In a discussion of the results, Lori Pierce, a radiation oncologist at Michigan Medicine in Ann Arbor, said though the study was able to recruit white, Asian and Hispanic participants at a level commensurate with their population in the U.S., only 6% of participants were Black, compared with the 13.6% of the U.S. population identifying as Black in the 2021 U.S. Census. “We need more patients of color as participants in clinical trials,” Pierce said.

Pierce noted that a previous analysis of multiple studies found that Black people are as likely to agree to participate in a clinical trial as white people—if a clinical trial is offered to them. But barriers such as not having information about clinical trials and not having any trials offered at their treatment site can keep Black patients from participating in research.

Abdou suggested future directions for treatment based on the findings, including differences in tumor biology as well as health care access and social determinants of health—a term for the factors in a person’s environment that affect their health, from employment and education to access to healthy food and a safe environment where a person can be physically active.