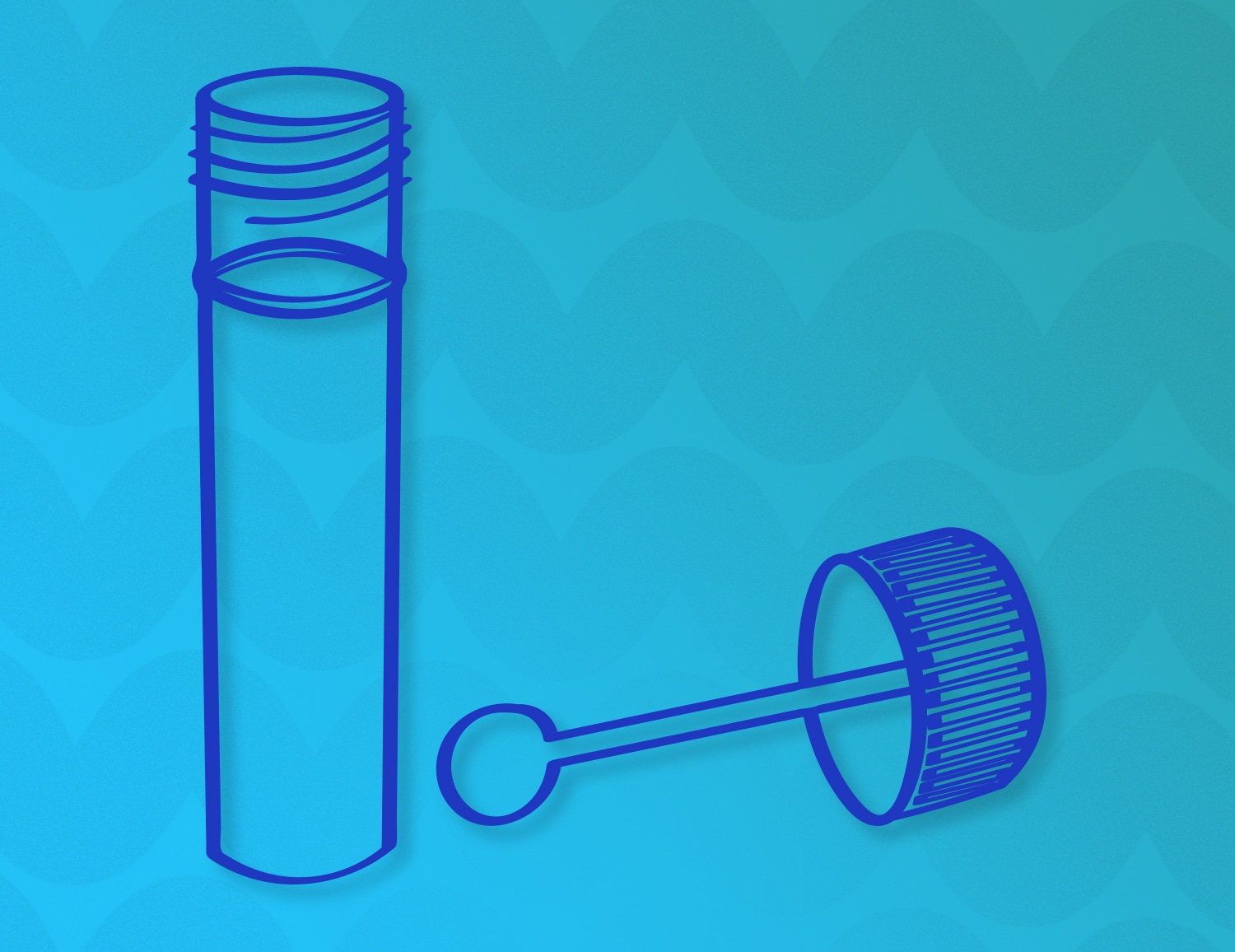 Some colorectal cancer screening tests allow people to collect a sample of their stool at home with a probe. Image by Bradley Jones

If the recommendation is finalized, about 20 million Americans will be due, overnight, for a colorectal cancer screening. People may assume that they need a colonoscopy, but this isn’t the only screening option. Stool-based test kits allow people to collect a stool sample at home, then mail it to a lab for analysis for signs of cancer.

Currently, about a quarter of people eligible for colorectal screenings haven’t gotten any screenings. Colonoscopy is the most common screening test; in 2018, 61% of American adults over 50 reported receiving one in the prior 10 years. Another 11% reported receiving a recent stool-based test, and 4% recently got flexible sigmoidoscopy or CT colonography, two other forms of USPSTF-recommended screening.

Offering options makes it more likely that patients will undergo colorectal screening, says gastroenterologist and cancer researcher Folasade May, who is director of the Melvin and Bren Simon Gastroenterology Quality Improvement Program at UCLA Health in Los Angeles. “If I tell patients about both stool-based tests and colonoscopies, it’s more likely that they will do one or the other. Choice matters,” says May. “We make it very clear to patients that there are many options and that they don’t all need to rush in for the invasive option.”

“With all the stool-based tests that we have included in the recommendation, there’s good science behind their effectiveness in detecting colorectal cancer early and at a stage that we can intervene,” says Martha Kubik, a member of USPSTF and director of the School of Nursing at George Mason University in Fairfax, Virginia.

Why are colorectal cancer screenings important?
Colorectal cancer can progress to advanced stages without symptoms. “I tell my patients that if I do a colonoscopy on you and we find cancer, that’s bad news. But if we do it in a timely manner and you have stage I, your chances of survival are over 90%,” May says. “But if we wait a year or two and you come to me and your cancer is stage IV, your survival drops to 14%.”

Other groups have different recommendations. For instance, the American Cancer Society already recommends that screening for average-risk people start at age 45. The U.S. Multi-Society Task Force, which consists of representative from three professional organizations, currently notes that Black Americans may benefit from beginning screening at 45. The group also says that people who have certain family history of colorectal cancer should have their first screening 10 years before the age of their relative’s diagnosis, or starting at age 40, whichever comes first.

What types of stool-based testing are available?
There are several recommended stool-based tests: a fecal immunochemical test and a high-sensitivity guaiac-based fecal occult blood test, which can both detect small amounts of blood in the stool, a possible sign of colorectal cancer; and a stool DNA test that can detect abnormalities in DNA.

Which is better: colonoscopy or stool-based testing?
People without high risk can choose either method, according to the USPSTF recommendations. May says that people with an elevated risk of colorectal cancer may want to choose a colonoscopy. She acknowledges that some people have a strong preference against a colonoscopy, and for them, the stool-based test is a good option. “The best test is the test that gets done,” she says.

“What we’re hoping for with the new recommendation is to provide [patients with] the range of screening tools,” says Kubik. “[We want to] provide that sort of balance of, ‘This might be a better fit for you, given your circumstances, and this might not.’ That’s the conversation that we want the primary care clinician to have with their patients—with the end result, ideally, that we get them cancer screening.”

How does stool-based testing work?
“You don’t have to touch your poop,” May says, addressing the big question. Kits come with a long-handled brush that allows a sample to be collected easily from the toilet bowl, or they allow you to poop directly into a sample container. While collecting a stool sample can induce an “ick” factor, May stresses it’s a small sacrifice. “I try to impress on people that the ‘ick’ factor is not enough for them to live in the unknown or to potentially lose their life,” May says.

Do these types of screening have different financial costs?
Any screening recommended by the USPSTF should be covered by private insurers at no cost to patients. Medicare also covers both screening colonoscopy and stool-based tests at no cost to patients. However, patients may be charged​ for related services, such as facility use or anesthesia during colonoscopy. Coverage for colorectal screening for Medicaid beneficiaries varies by state. Even if screening is completely covered, one factor to consider is that an abnormal result from a stool-based test requires a colonoscopy. If the colonoscopy is a follow-up to a stool-based test, it may not be covered by insurance as a screening test. Similarly, in some cases a screening colonoscopy that identifies a cancer or precancer may be reclassified as a diagnostic colonoscopy and may come with costs to the patient. The federal government has stated that private insurers should not charge patients when a polyp is removed in the course of colorectal cancer screening, and a law​​ enacted in December 2020 will also phase out charges for Medicare patients in this situation. Talking with a primary care provider is the best way to find the right approach, says Kubik, with individual considerations factored for risk, preference and cost.​