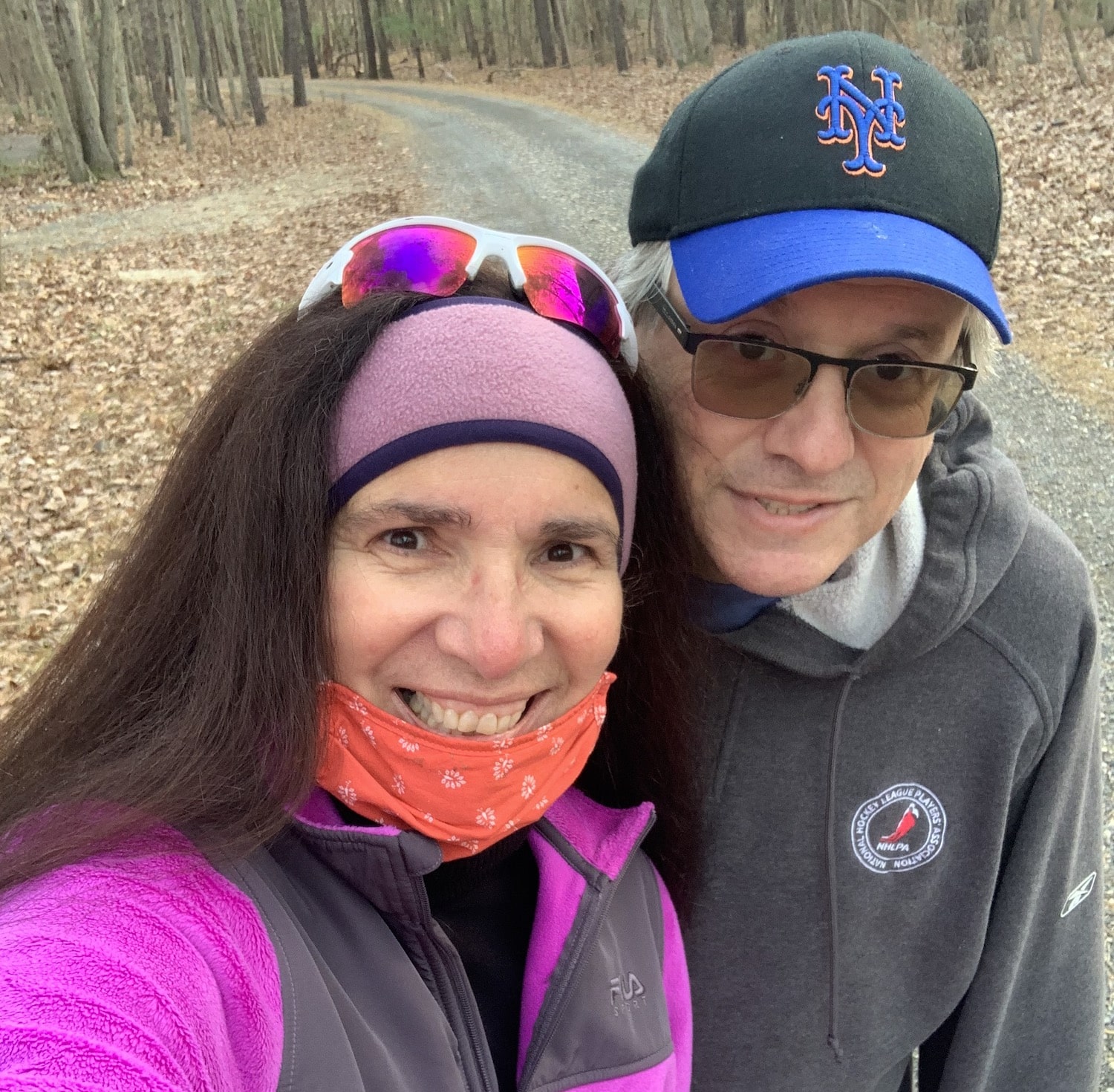 In March 2018 ​at age 57, my husband, Jon, was diagnosed with stage IV rectal cancer that had metastasized to his lungs. When we received the shocking diagnosis in the doctor’s conference room after Jon’s colonoscopy, we had already planned our annual summer hiking trip to a national park.

We never considered canceling. Jon and I have been physically active together for more than 40 years. We had been hiking in national parks in the summers since 2010. I am also an ultramarathon runner, which means I run races that are longer than a marathon. Jon accompanies me during my training and paces me during races by running or walking alongside me to provide moral support and encouragement, often at mile 50 or 60 of a 100-mile race or 24 hours into a 48-hour race, when the fatigue and sleep deprivation have set in for both of us. Jon has also crewed me during my ultramarathons, a responsibility that involves giving the runner food, helping the runner change her socks and clothes, draining blisters, and applying duct tape to the toes and feet to prevent blisters.

Jon’s initial treatment would be chemotherapy every other week, starting in May 2018. We made it clear to Jon’s oncologists and surgeons that we were going to live our lives and do the things we love. Jon kept working in his job as an environmental consultant and project manager. We also communicated our plans to them for travel and keeping Jon moving. Jon’s doctors were very supportive and understood the importance of physical activity in his treatment. Research shows that physical activity is beneficial during and after cancer treatment.

Jon’s oncologists agreed that his chemotherapy infusion could be postponed by a week while we were on our summer trip. In July 2018 we drove form our home in Voorhees, New Jersey, to Cuyahoga Valley National Park in Ohio, our 19th national park, where I would be running the Burning River 50-mile trail ultramarathon. Keeping Jon moving and out in nature offered him some distraction from the cancer pain. It gave me—his caregiver—some respite. 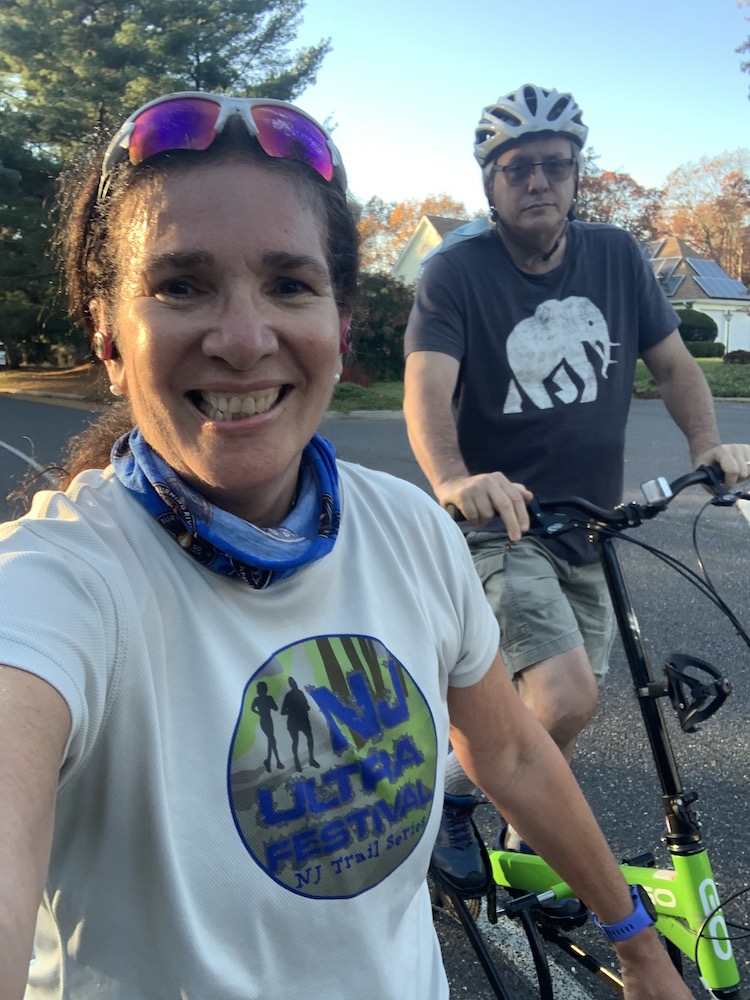 Both before my Burning River ultramarathon and before other races, Jon joined me on training runs on his stand-up elliptical bike, which allowed him to ride easily without the discomfort of a seat. He logged approximately 87 miles in 2018 and early 2019 before his surgery in March 2019, exactly a year after his diagnosis, to remove the lower lobe of his right lung where his cancer had metastasized. Throughout, he continued to undergo chemotherapy.

A couple of weeks after his surgery, he was going for walks and gardening with me. He built a second raised vegetable garden bed. On Mother’s Day weekend 2019, he crewed me at a 24-hour track ultramarathon. The following Monday morning, he underwent an eight-hour surgery to remove his rectal tumor. Between April and June 2019, he also received radiation therapy to his rectum and his lung. After recovery, he hopped back on his bike in July. In August we headed to South Carolina and Kentucky to hike over 25 miles in two national parks. On Labor Day weekend, Jon crewed me at a multiday ultramarathon in Tennessee.

By November 2019, Jon had no evidence of diseases according to scans, but he was still on chemotherapy. We headed to four national parks in the Southwest in December and then to another multiday ultramarathon in January. This time, Jon paced me the last nine miles of my 101.63 miles in the freezing-cold Arizona desert.

In February 2020 Jon had his last chemotherapy infusion. Today, he still shows no evidence of disease. Physical activities such as walking, hiking and cycling kept him strong during his treatments, prepped him for surgeries and helped him recover quickly.

A cancer diagnosis is devastating, but it doesn’t have to stop you in your tracks.

These are my tips, based on our experience, to help you keep moving.​​​

​I have known for years that exercise is a key to my well-being. I credit my physical fitness with helping me survive prior surgical complications, so I applied my experience with physical activity and healing to Jon’s cancer journey. Subsequently, I learned about research showing the benefits of exercise during cancer, including improved mood, physical functioning and quality of life, and even potentially reduced cancer mortality for people with some cancer types.

In Jon’s case, his years of a physically active life prior to his diagnosis did not prevent his rectal cancer. Jon had an excellent team of oncologists, surgeons and nurses. His cancer journey was overwhelming and painful. However, his years of physical activity and movement made him a good candidate for what he faced and survived. Despite aggressive radiation, chemotherapy and multiple surgeries, Jon continued moving. From June 2020 to November 2020, he accompanied me on his elliptical bike for 389 miles of my 901-mile virtual ultramarathon. And he is still moving.

Miriam Díaz-Gilbert​ is a freelance writer, an adjunct professor of world religions and spirituality and healing, and a cancer caregiver training for her 29th ultramarathon. She lives in Voorhees, New Jersey.