A Switch From Intravenous to Oral Chemo?

Compared with intravenous paclitaxel, the oral form of the chemotherapy drug was associated with improved tumor shrinkage in metastatic breast cancer patients. 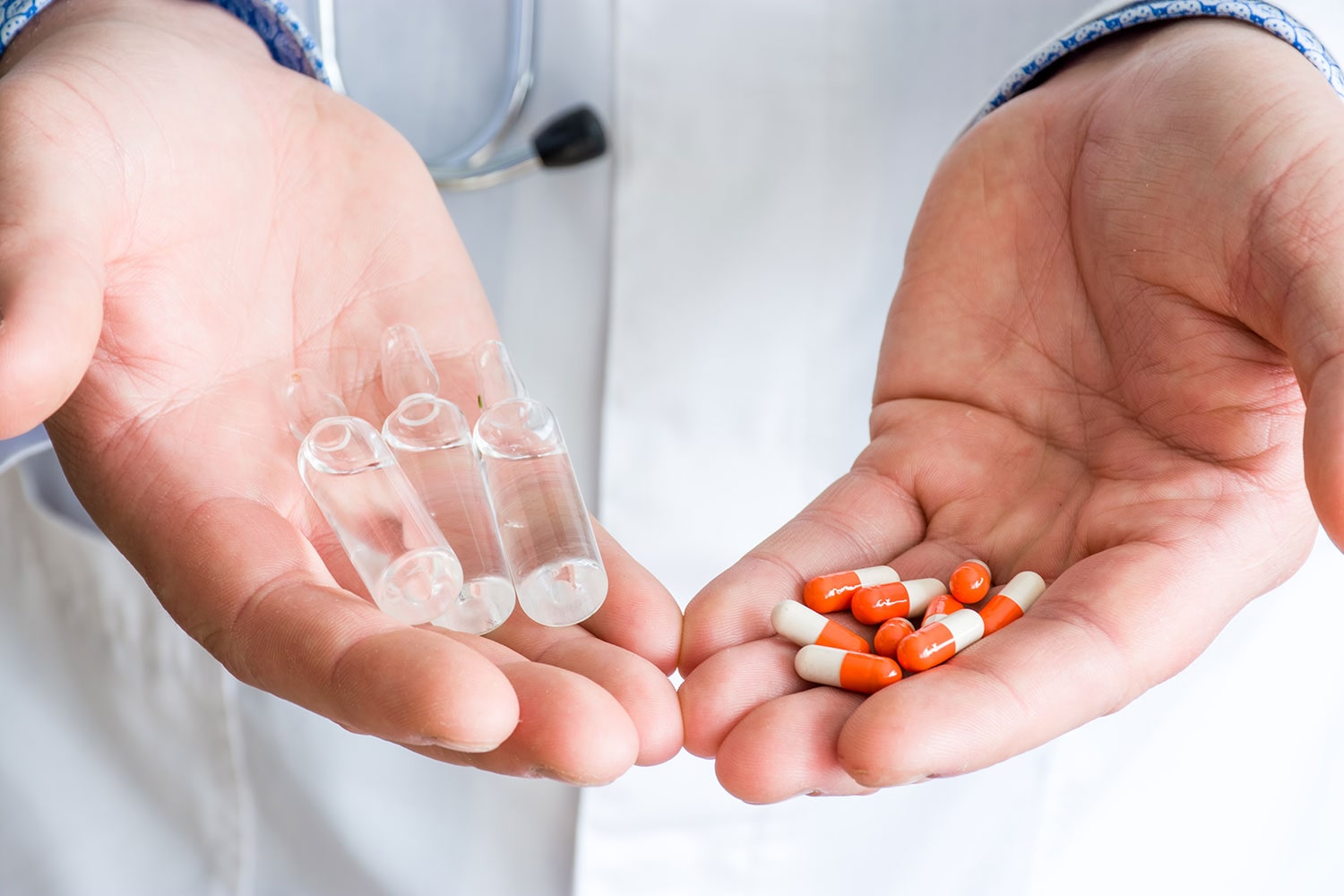 TO RECEIVE CHEMOTHERAPY, cancer patients typically make frequent trips to infusion centers to get the drugs pumped into their blood through an IV. Chemotherapy drugs in pill form, which can be taken at home, save patients trouble and time. A phase III clinical trial examined the effectiveness of an oral form of the chemotherapy drug paclitaxel compared with the intravenous version. Paclitaxel is commonly used to treat patients with metastatic breast cancer.

Metastatic breast cancer patients given paclitaxel in pill form survived longer, had less neuropathy and experienced greater tumor shrinkage than those who received the standard, intravenous form of the drug, according to the results of the trial presented Dec. 13 at the 2019 San Antonio Breast Cancer Symposium.

The researchers enrolled 402 adult women with metastatic breast cancer in the study, which began in December 2015, and assigned them in a 2:1 ratio to either take the pill form of paclitaxel three times per week or to receive infusions of intravenous paclitaxel every three weeks. The oral paclitaxel was given at the same time as another oral drug, encequidar, which improves absorption of paclitaxel into the blood. The study was designed to last for at least 160 days of treatment (though some patients continued the treatment beyond that point). The data reported at the conference were from an analysis done at 23 weeks, says Gerardo Antonio Umanzor Funez, a medical oncologist with Centro Oncologico Integral in San Pedro Sula, Honduras, who led the study. The research was funded by Athenex, a biopharmaceutical company based in Buffalo, New York.

The oral drug worked better than the IV drug to shrink patients’ tumors, which was the primary endpoint of the trial. Of the participants who received the oral drug, 35.8% showed a tumor response—meaning their tumors got smaller according to radiological scans. Meanwhile, 23.4% of those who received the intravenous drug showed a tumor response, a difference that was statistically significant. When patients whose tumors could not be radiologically evaluated or did not receive the requisite number of treatment doses were excluded from the analysis, the proportion of patients whose tumors responded was even higher.

At present, median overall survival, which the researchers began monitoring when they randomized patients to their treatment groups and are still tracking, was significantly higher in the oral paclitaxel group (27.9 months) than in the group that received IV infusions (16.5 months). Progression-free survival, defined as length of time a patient’s tumors do not grow or time before a patient dies of any cause, whichever comes first, was not significantly different between the two groups.

The researchers also observed differences in the incidence and severity of peripheral neuropathy, one of the main side effects of paclitaxel, between the two groups. Patients with peripheral neuropathy lose sensation or experience pain or tingling in their limbs. Among participants who received at least one cycle of paclitaxel, 17% of those taking the oral drug had neuropathic adverse events compared with 57% of those taking the drug intravenously. Further, 1% of patients who received the oral drug had grade 3 neuropathic symptoms—severe symptoms that are not yet life-threatening—compared with 8% of those receiving the IV drug. “I think it’s a big deal, and it can be a big deal for patients and for doctors,” Umanzor says. The participants who took the oral drug also had higher rates of gastrointestinal side effects than those who took the IV drug, but those symptoms were manageable, he noted.

According to Umanzor, neuropathy was graded according to the Common Terminology Criteria for Adverse Events, which physicians use to classify symptoms, where grade 1 is asymptomatic, grade 4 is life-threatening, and grade 5 is death. The researchers reported on grade 3 symptoms because they are the ones that affect day-to-day activities, Umanzor says. “That’s the one that we’re most worried about,” he says.

Patients with grade 3 peripheral neuropathy “might have difficulty walking or buttoning their clothes. So it’s not just that they have the symptom, but they’re actually having trouble using their hands or feet because of the changes in sensation,” explains medical oncologist Patricia Ganz of the Fielding School of Public Health at the University of California, Los Angeles, who was not involved in the study.

Ganz, who studies breast cancer and quality of life, says she would like future research to involve patient-reported data on peripheral neuropathy. She says clinicians often underestimate the severity of patients’ symptoms.

“My main takeaway is it looks like there may be an oral preparation of paclitaxel that could be given as an alternative to the intravenous therapy. And that for patients who either have difficulty traveling—say somebody in a rural area who doesn’t have access to getting scheduled in an infusion center—this could be a replacement therapy. But it needs more study,” Ganz says.