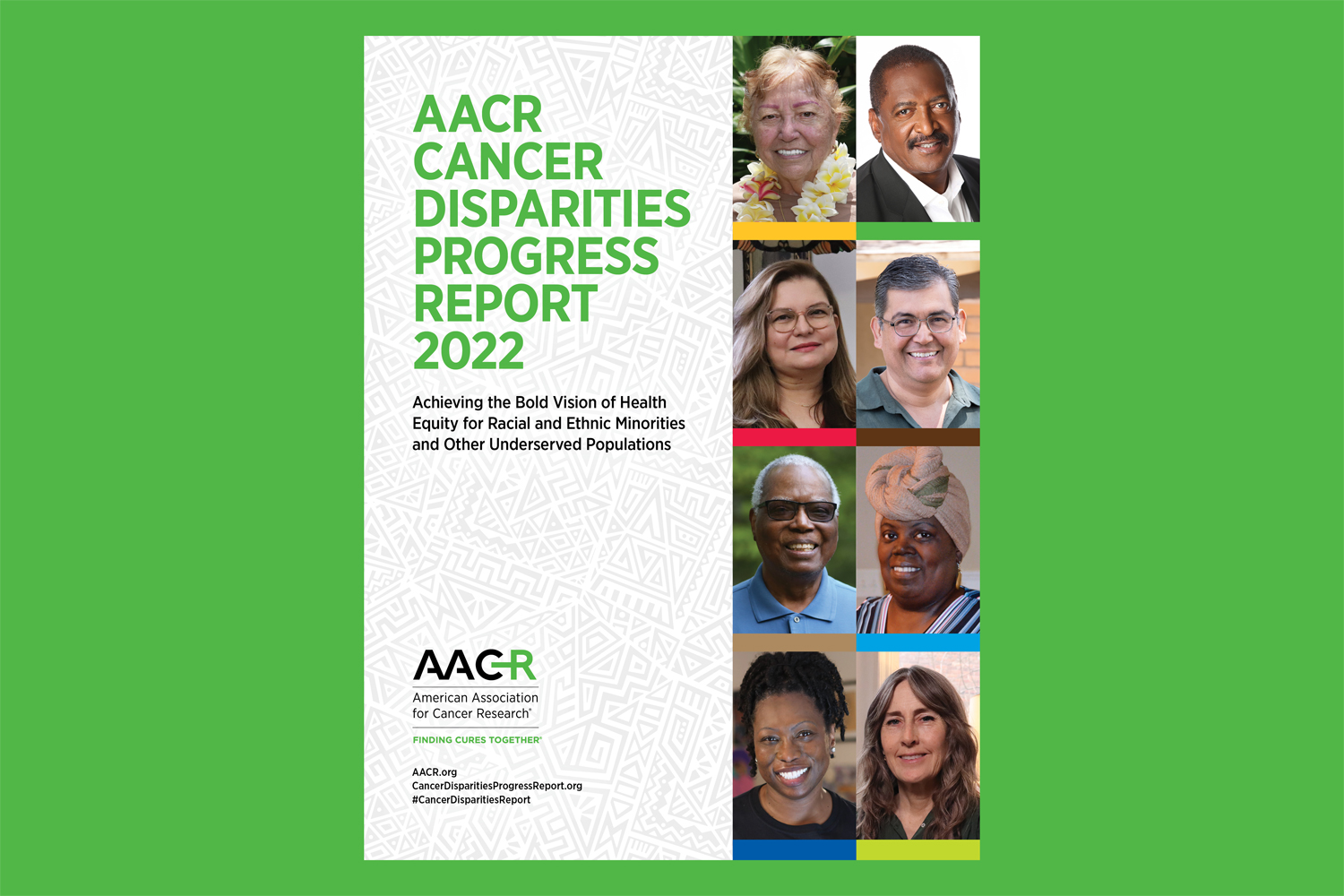 ​Image courtesy of the American Association for Cancer Research

IN A NEW REPORT ON CANCER HEALTH DISPARITIES, the American Association for Cancer Research (AACR) charts significant progress made in recent years to address differences in cancer treatment and outcomes, but notes that significant disparities persist and require continued attention. The AACR Cancer Disparities Progress Report 2022 was released June 8, accompanied by a congressional briefing that shared notable findings from the report and related stories of cancer survivors who faced higher risks of cancer diagnosis or death linked to their race, ethnic background, sexual orientation, gender identity, community or economic status. (The AACR publishes Cancer Today.)

“One of our most important initiatives has been, and continues to be, our concerted efforts to eliminate cancer disparities in racial and ethnic minorities and other medically underserved populations,” Margaret Foti, CEO of the AACR said in the briefing. “To that end, the important purpose of today’s congressional briefing is to highlight the enormous public health threats posed by cancer disparities and to provide policy recommendations to address these threats.”

The report includes evidence that work to decrease disparities in the U.S. has had positive effects, noting that the disparity in overall cancer mortality rates between Black people and white people shrunk by half, from 26% to 13%, between 2000 and 2019. Additionally, findings from states that expanded Medicaid eligibility under the Affordable Care Act (ACA) showed disparities between white women and Hispanic women in getting timely mammograms were erased, as were disparities between Black and white patients starting chemotherapy within a month of diagnosis.

Despite such improvements, the report shows that disparities persist. In multiple myeloma, the incidence and mortality rates are twice as high in the Black population as they are in the white population. Transgender men are more than twice as likely to get cancer as cisgender men. For people living in rural counties, the combined death rate for all cancers is 17% higher than it is for people in urban areas.

Included in the report are explorations of the causes behind disparities in cancer development, detection, treatment and survivorship. Social determinants of health, the conditions under which people live, grow, work and play, have important effects on people’s well-being and quality of life. These factors include everything from access to healthy foods to environmental exposures in the community to the quality of health care available to a person. The report shares how these factors interact and how they are influenced by systemic injustices.

In one example, the report outlines how discriminatory practices that led to segregated neighborhoods are reflected in the exposures that people with lower incomes, and especially people of color, encounter. The report cites data from the Environmental Protection Agency that shows Black and Hispanic people are more likely to be exposed to air pollutants and to experience pollution-related health problems. It also notes a study that looked at redlining—a practice that led to neighborhood segregation—found that women living in areas that were historically redlined had a 58% higher risk of dying from breast cancer than the general population.

But the issues extend beyond the environment to what kind of health care people are getting. Many aspects of getting care are affected when the health care industry fails to represent the people of the community, whether it is in the doctors who care for cancer patients or the participants in clinical trials that tell us whether and how a treatment works.

“The AACR is extremely concerned that racial and ethnic minorities continue to be underrepresented in cancer research and in clinical trials, especially because people of different ages, races and ethnicities may respond differently to cancer therapies,” said Lisa M. Coussens, the associate director for basic research at Oregon Health & Science University’s Knight Cancer Institute and AACR president.

In a call to action, the report identifies priorities that policymakers can undertake to address disparities in cancer:

Coussens said the organization hopes the report spurs policymakers and members of the cancer research and advocacy communities to take actions to address the disparities presented. “It is clear that we must do better as a nation to confront the serious problems of cancer health disparities. It is absolutely unacceptable that advances in cancer care and treatment are not benefiting everyone equally.”