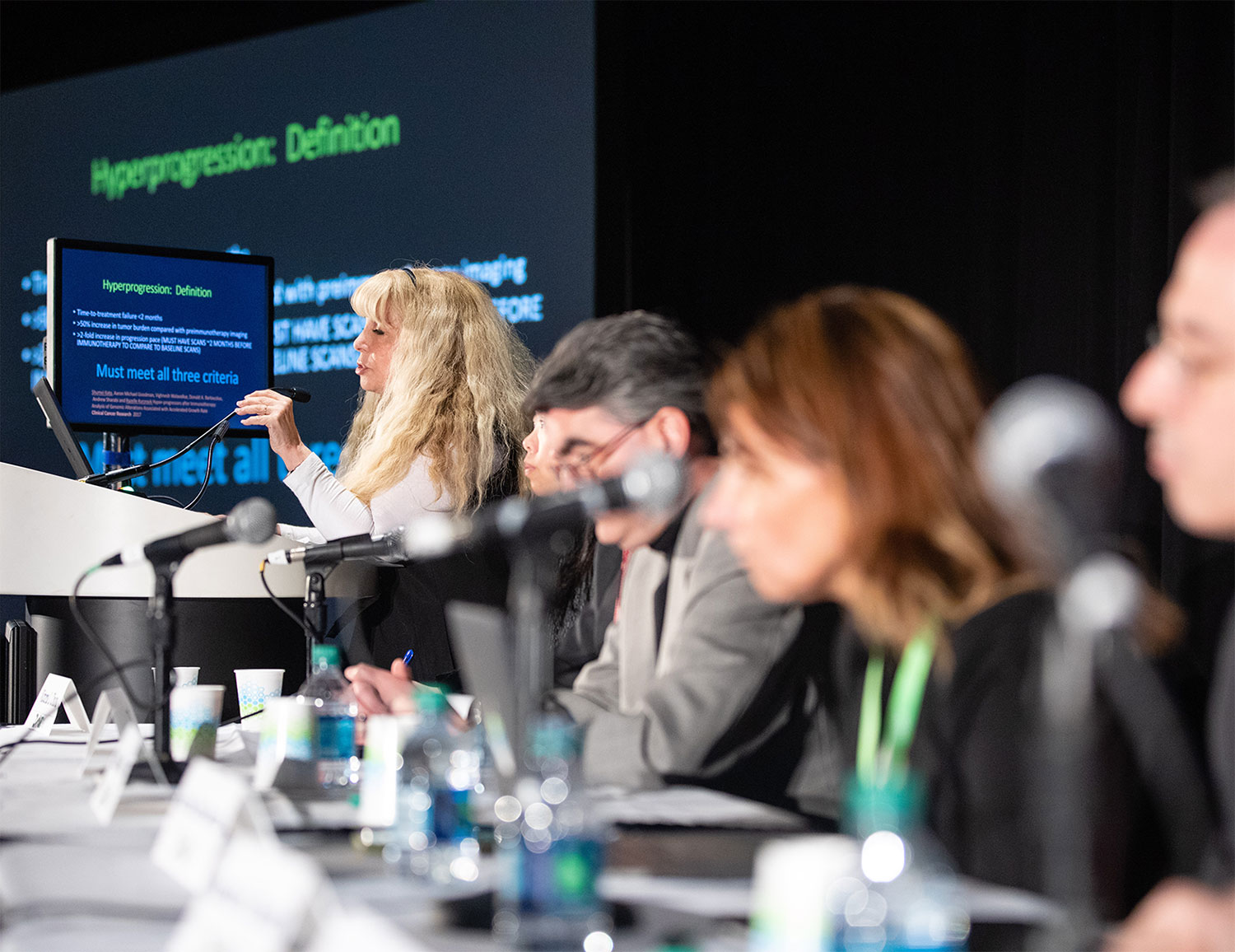 Medical oncologist Razelle Kurzrock speaks during a session on hyper-progression at the American Association for Cancer Research Annual Meeting 2019. Photo by © AACR/Scott Morgan 2019

IMMUNOTHERAPY DRUGS CALLED checkpoint inhibitors work by blocking proteins that prevent immune cells from recognizing cancer cells as a threat and killing them. They have been approved to tre​at more than a d​ozen types of advanced cancer.

But a few years ago, researchers began to suggest that these drugs could sometimes produce the opposite of their desired effect: Occasionally, patients’ cancers began to rapidly grow after they received checkpoint inhibitors.

A session on this phenomenon, referred to as hyper-progression, was held March 31 at the American Association for Cancer Research (AACR) Annual Meeting 2019, which is taking place in Atlanta from March 29 through April 3. (The AACR publishes Cancer Today.) Researchers Victoria L. Chiou from the U.S. Food and Drug Administr​ation (FDA) in Silver Spring, Maryland, and Elad Sharon from the National Cancer Institute in Bethesda, Maryland, co-chaired the session.

Chiou kicked off the session with an audience poll, asking, “Does hyper-progression exist?” Some researchers argue that patients said to have hyper-progressive disease simply have fast-growing cancers that would have progressed rapidly even if they had not taken immunotherapy drugs.

Among respondents to the poll, the majority were believers in hyper-progression, with 58 percent of the audience answering “yes,” 12 percent answering “no” and 30 percent saying they were undecided.

“Hyper-progressive disease is a topic that polarizes most … people,” said Jean-Charles Soria, now a researcher at MedImmune in Gaithersburg, Maryland, who spoke during the session and was an author of the paper that first attempted to characterize the phenomenon.

The paper, published in November 2016 in Clinical Cancer Research, focused on patients treated in phase I trials of checkpoint inhibitors targeting the proteins PD-1 or PD-L1 at Gustave Roussy in Villejuif, France. They found that 12 out of 131 patients experienced hyper-progression, defined as instances where patients showed progression at their first evaluation after starting immunotherapy and where cancer began to grow at least twice as fast after the patient started the treatment.

Since then, other studies have documented hyper-progression in various cancer types, finding rates anywhere from 9 to 29 percent, according to thoracic oncologist Marina C. Garassino of the Istituto Nazionale dei Tumori in Milan, who also studies hyper-progression.

But across different studies, definitions of what constitutes hyper-progression differ, Garassino said. These definitions include various combinations of criteria, such as how long it takes cancer to progress, how much the size of tumors increases and how rapidly tumors grow.

Marc Theoret of the FDA Oncology Center of Excellence in Silver Spring, Maryland, said that the clinical trial data the FDA receives does not typically include information on the patient’s cancer in the period prior to starting the trial, which is key to figuring out how their cancer growth had changed over time.

Lawrence H. Schwartz, a radiologist at Columbia University Medical Center in New York City, highlighted the role imaging plays in identifying hyper-progression and the ambiguities associated with defining the phenomenon.

“Until as a community we have a common definition, only then will we have meaningful discussions, because otherwise we are discussing different topics,” said Soria.

Another obstacle to acceptance of hyper-progression, Soria said, is that researchers “do not have a clear understanding of the biology that drives hyper-progressive disease.”

To that end, Garassino is investigating whether immune cells called macrophages play a role in hyper-progression. Razelle Kurzrock, a medical oncologist at Moores Cancer Center at UC San Diego Health in La Jolla, California, is looking at how studying genomics might shed light on hyper-progression.

Kurzrock has published research showing that patients with mutations in the EGFR gene or extra copies of the MDM2 or MDM4 genes are more likely to have hyper-progression. She has also found that repeatedly measuring DNA released into the bloodstream from tumors after treatment can help researchers tell which patients are experiencing hyper-progression.

Despite progress, clinicians still face the challenge of communicating with patients about a problem that is still not fully understood.

Patient advocate and ovarian cancer survivor Susan Leighton of Huntsville, Alabama, told the assembled researchers how “confusing” the emergence of new concepts like hyper-progression can be for patients. “Imagine being that patient sitting across the desk from the doctor hearing, ‘This might be a good treatment for you. We don’t really know if hyper-progression exists, but it might,’” she said.

Leighton pointed out that treatment selection is “the most difficult decision any cancer patient makes.” This decision can become overwhelming when doctors do not yet have full answers to all of the questions that are important to patients or when the answers to these questions are rapidly changing. Doctors should make sure to present patients the most up-to-date data possible, she said.