Letting children know they might have a mutation that increases their risk for cancer can be a challenge for patients. Experts stress there is no right or wrong way to share the information. 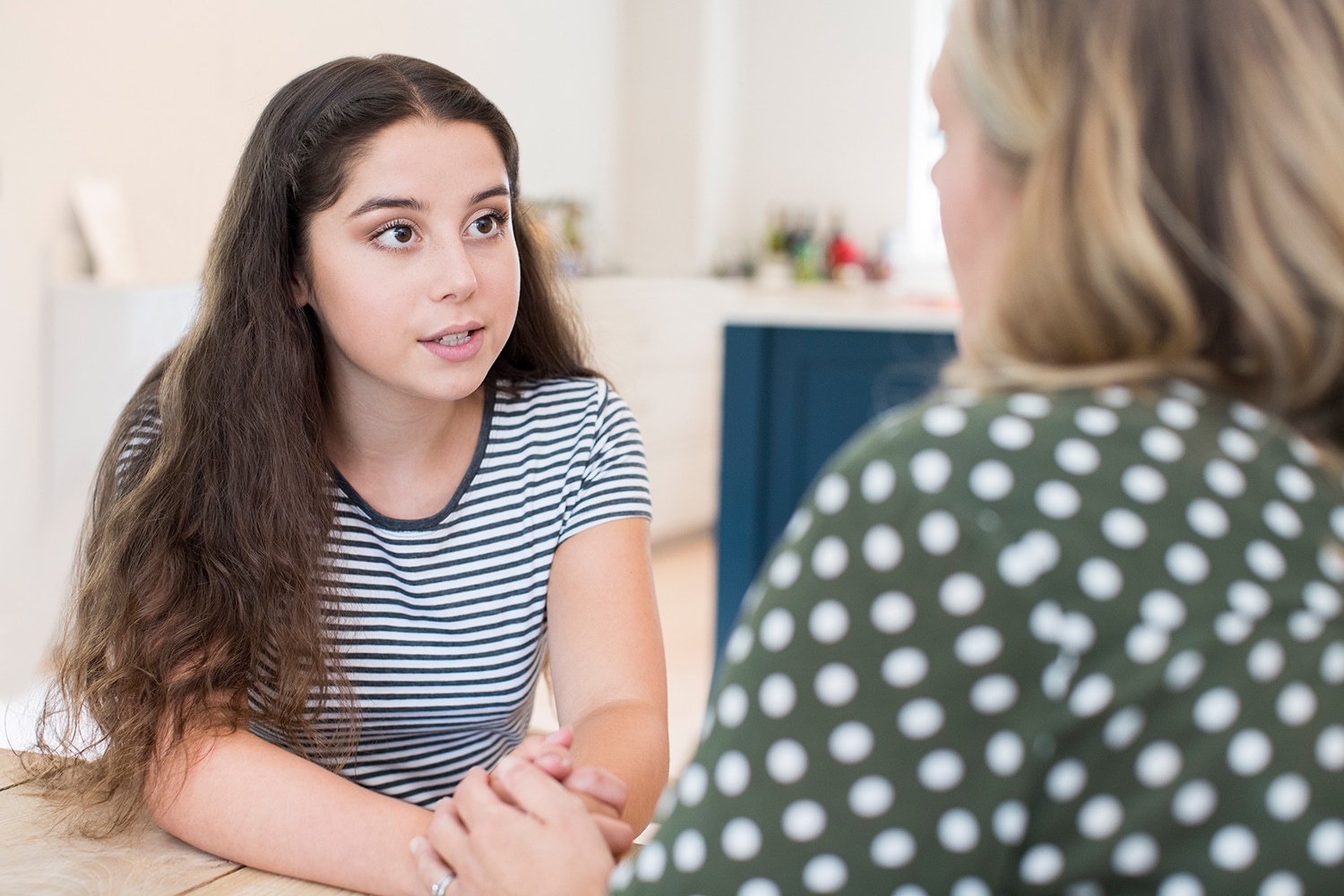 WHEN AMY BYER SHAINMAN ​learned she carried a BRCA1 mutation in 2009, her daughter was 8 and her son was 5. She underwent a hysterectomy and double mastectomy to minimize her risk of getting breast and ovarian cancer, as well as breast reconstruction. At the time, she talked to her children about her surgeries in general terms: She was going to the hospital to take care of her health—in much the same way her children would get regular checkups—except that she would stay at the hospital overnight.​

Shainman knew she would need to revisit the topic with her children throughout their lives. Angelina Jolie’s May 14, 2013, op-ed in the New York Times—in which she wrote about her BRCA1 mutation and the decision to have her ovaries, fallopian tubes ​and breasts removed—opened the door to the conversation.

Shainman wrote about the discussion with her then-12-year-old daughter in her book, Resurrection Lily: The BRCA Gene, Hereditary Cancer & Lifesaving Whispers from the Grandmother I Never Knew: A Memoir. U​sing accurate but general language to describe Jolie’s and her efforts to lower their chances of getting cancer, Shainman talked about her surgeries in proactive and positive terms. She even lifted her shirt to show her daughter how “normal” her breasts looked.


Sharsheret: The Jewish Breast & Ovarian Cancer Community​
How Do I Tell My Children About My Cancer Gene Mutation?

FORCE: Facing Our Risk of ​Cancer Empowered
Talking About BRCA in Your Family Tree

Children have a 50% chance of inheriting a BRCA mutation if one of their parents has it. Knowing when to have a conversation with children about their chances of inheriting the mutation—and how much information to divulge when they may not yet be old enough to be tested for the mutation or to take measures to screen for signs of cancer—can be difficult for parents who may have just learned about their BRCA mutation.

Now that Shainman’s daughter is 18, she is planning to have another conversation—a “level up” to discuss with ​her daughter how she should be aware of her own body. “It’s a balance of wanting to be truthful, but also knowing who your child is as a person. It’s nuanced. I don’t think it is one size fits all,” she says. (She will also speak with her son, but recommendations for men who have a BRCA gene mutation suggest screening for prostate cancer at age 40, in addition to clinical breast exams starting at age 35.)

Research suggests that older children, ages 12 and up, are more likely to be told about a BRCA mutation then younger children, says Kenneth Tercyak, a researcher at the Lombardi Comprehensive Cancer Center at Georgetown University Medical Center in Washington, D.C., who has studied communication patterns between parents with genetic mutations and their children. “Our data has shown that parents who make that choice to be open, honest, and to disclose information to their children often feel a sense of psychological relief after sharing the news, and generally do not regret doing so,” he says.

Tercyak also stresses that there are no rules when it comes to informing children. “The decision to share the information often needs to be made in context of what else is happening in the family and the child’s readiness to receive the information,” Tercyak says. “Knowing your child and recognizing how they tend to respond to other important health information can be an indicator of how they might react to learning about this. There is no right or wrong decision here. It’s more about what feels right for the family and giving children the chance to ask questions and express themselves.”

For parents struggling with the decision of how and when to communicate, the following guidelines may help start the conversat​ion.

Get comfortable with your own risk. When delivering news to a person who has tested positive for a mutation associated with a strong risk of cancer, a genetic counselor’s first focus is on the individual—making sure the person understands what the mutation means for them—says Leigha Senter-Jamieson, a researcher and genetic counselor at Ohio State University Comprehensive Cancer Center in Columbus. The next step is discussing when and how to tell a person’s family, including children, Senter-Jamieson says.

The point is: It typically takes time for a person who learns they have a mutation to adjust to the news, and understanding what measures might be needed as a result of the mutation can help a parent become more knowledgeable for future discussions with children. “They do not need to be an expert in the subject, but there will almost always be questions,” says Senter-Jamieson. “Parents are not going to be confident in answering those questions if they just found out about the diagnosis themselves.”

Let past family exchanges set the tone. Each family is different, so it’s important to take into account a family’s communication style, says Adina Fleischmann, a licensed social worker who is the director of support programs at Sharsheret, a Jewish breast cancer organization that provides support services and educational outreach to women and families living with or at an increased risk for breast and ovarian cancer.

“Everybody is going to choose the way that works best for their families, the time that works best and the amount of the information that is shared that works best based on their experience,” says Fleischmann. “We really do encourage families to ask [themselves] what has worked in the past when sharing difficult information with their family.” A parent’s knowledge of his or her children should also set the tone, says Peggy Cottrell, the genetics program coordinator for Sharsheret.​

Age matters. A child’s age when a parent finds out can be a factor in deciding what to tell them and how much information to share. Testing children for BRCA mutations is not recommended until they reach an age where they are able to take some actions to manage their risk. And cancer risk for people with BRCA mutations doesn’t typically increase until they reach their late 20s or their 30s.

Patients with BRCA mutations are advised to start screening measures—such as breast MRIs, annual mammograms and clinical breast exams—at age 25. “The one guideline that we do always communicate is that, at a minimum, parents should tell their children at the age at which the screening would change for their child if they tested positive, because that’s the whole point,” says Senter-Jamieson.

In many cases, Cottrell gives permission for parents to hold off on telling their young children until they are older if they don’t want to share the information right away. “We want to credit our patients about being wise to how family communication works for them,” says Cottrell.

Other benchmarks for telling children include if they are getting married or considering starting their own family. Even then, experts recommend parents take time to make sure they have a firm understanding of what the genetic mutation means for themselves, so they can set a positive and in-control tone.

Break it into pieces. Sharing information about risk doesn’t need to come in one big conversation. Parents can weave information into their interactions with children by highlighting steps they are taking to care for themselves, without getting into an in-depth description of BRCA mutations. Education can start when children are young by simply mentioning an annual MRI at the time of a parent’s screening to model a healthy behavior. “Your discussions first might be very superficial if you are talking to a very young child, and you can build on that over time so it becomes part of the fabric of your family, rather than a pivotal event that happened in a kid’s life. It just becomes part of their normal,” says Senter-Jamieson.

Genetic counselors can help. Genetic counselors can help to guide these discussions, says Senter-Jamieson, especially for parents struggling with where to start. She says she sometimes hears from people who tested positive years earlier and who want to develop a game plan for telling their children now that they are ready to share the information.

Senter-Jamieson also welcomes families into her office shortly after a family member learns he or she has inherited a cancer-causing mutation. “We like it when families come in together, and oftentimes it’s nice to bring the kids before they ever would be tested just to hear information,” she says. “Sometimes kids want to ask questions of someone like me who they don’t know rather than their mom or dad, and they feel a little more comfortable.”

The discussion can be scary, but genetic counselors stress that screening and surgeries can actually allow families to take proactive steps in reducing their risk.

“I often tell people that having that positive result might seem like a curse to their children since they might have inherited this, but having had the testing done is really a gift that they are able to give to their children,” says Cottrell. “Here, with this heads-up, you may be able to save the life of someone in your family.”​

Despite the weight of knowing she has a mutation, Shainman, who is Ashkenazi Jewish, sees the testing as a blessing. Going by the Twitter handle @BRCAresponde​r​, Shainman uses social media to increase  awareness of BRCA mutations  and encourages families that are affected to have meaningful discussions surrounding their risk. Her discussions with her children have changed over time. Her focus is on ​ensuring her children have enough information to be proactive about their health—if they too end up having the mutation.

Shainman currently operates under the assumption that her children will have the BRCA1 mutation until testing proves otherwise. For her daughter, this means doing manual exams now that she is 18. “I just really want her to be familiar with her body and to know there is a gene mutation in our family, but I don’t want to stress her out,” she says. “I want her to go to college. I want her to enjoy life because there really is nothing else that she can do [at her age] in terms of health screening and monitoring.”

Now 50, Shainman continues to set the tone for what living with a BRCA mutation looks like for her family. She is thankful that times have changed since her grandmother was diagnosed with cancer and died at age 33. Back then, no one spoke about it or understood why she had cancer at such a young age.​ “Look, I have a BRCA mutation, and I’m still here,” says Shainman. “I feel fortunate to be alive in a time where advances have been made and research is making strides. … I feel like we’re at a time where I am hopeful for my children.”​