An AACR Annual Meeting 2022 session highlights the impact of research advocacy partnerships for a variety of cancers. 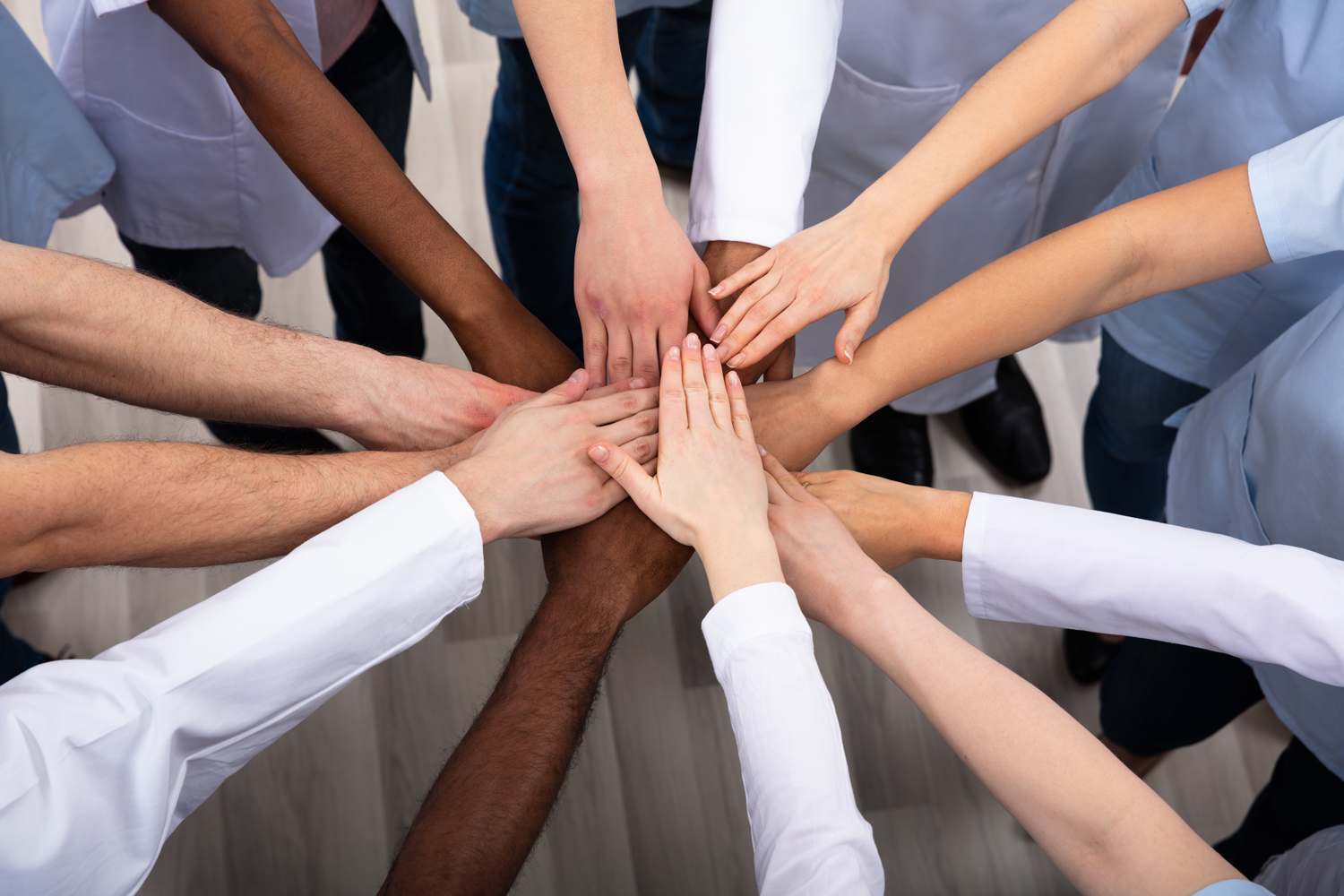 THE 2016 CANCER MOONSHOT INITIATIVE, headed by then-Vice President Joe Biden, sought to create a national agenda to speed cancer research discovery and advances. One of the key recommendations from expert panels assembled for the initiative was to create a network that would engage patients, who would then help shape the cancer research agenda. These patient partnership efforts—with a focus on rare, pediatric and advanced-stage cancers—were showcased at an April 10 session of the American Association for Cancer Research (AACR) Annual Meeting 2022, held in New Orleans. (The AACR publishes Cancer Today.)

The session, which was prerecorded for both virtual and in-person viewing, highlighted four NCI programs funded by the Cancer Moonshot that focused on patient engagement. These NCI initiatives shared common elements. Each focused on collecting patients’ biospecimen samples from blood, tumor tissue and saliva to help researchers learn more about cancer, while also working with patients to gather input about their experiences.

“These partnerships allow us to provide access to important information. Rare disease presents many challenges, but access to quality data that is meaningful is extremely important and is an unmet need of our underserved community,” said Kimberly Wallgren, executive director of the Collaborative Ependymoma Research Network (CERN) Foundation. While ependymoma is more often diagnosed in children, Wallgren’s father was an adult when he was diagnosed with this rare ​cancer, which can start in the cells tha​​t line the ventricles of the brain and the center of the spinal cord.

During her presentation, Wallgren described CERN’s collaboration with the Comprehensive Oncology Network Evaluating Rare CNS Tumors (NCI-CONNECT), which seeks to engage with patients and to better understand rare adult central nervous system tumors. NCI-CONNECT focuses on 12 tumor types, which together represent less than 2,000 people diagnosed annually in the U.S., said Terri Armstrong, a neuro-oncologist and researcher who is the co-lead of NCI-CONNECT.

During the session, Josh Sommer described his experiences as a chordoma survivor and president of the Chordoma Foundation. The treatment for chordoma, which forms in the skull and the spinal bones, is typically surgery, but the disease often recurs with limited options for effective follow-up treatment. As a result, the median survival for chordoma patients is about five years, although length of survival can vary considerably, Sommer said. One challenge in learning more about this rare disease, Sommer added, is that patients typically see a range of specialists for treatment.

“Patients will travel for treatment; sometimes they will have radiation at one center and surgery at another center, … so they typically don’t get care at a single institution,” Sommer said. “No single specialist will have the entire clinical view of the patient’s medical history.” To help facilitate a more robust exchange of information, the Chordoma Foundation teamed with the NCI’s My Pediatric and Adult Rare Tumor Network (M​yPart​), a program that focuses on finding cures for rare solid cancers. As a result of the partnership, MyPart has entered 60 chordoma patients into the tumor registry, which is remarkable considering only about 300 cases of this cancer are diagnosed annually in the U.S., said Abby B. Sandler, executive director of MyPart, who presented with Sommer.

Another Cancer Moonshot initiative, the Participant Engagement and Cancer Genome Sequencing Network focuses on cancer genome sequencing for various types of cancer, including those that are rare, highly lethal, affect people at an early age, are associated with high disparities or represent understudied populations. Cancer researcher and oncologist Nikhil Wagle at Dana-Farber Cancer Institute in Boston described the MIT Broad Institute’s Count Me In initiative, which hosts an online portal that provides a platform for patients with osteosarcoma and leiomyosarcoma, two cancers that each affect 2,000 people or less in the U.S. annually. This platform allows patients and their families to share their experiences and genetic information to help scientists study the disease. “Patients have been involved from the very beginning, to the conception, to the design, to the ongoing research,” Wagle said.

Maeve Smart, a senior at Northwestern University in Boston studying health science on a pre-med track, is one of those patients. Smart was diagnosed with osteosarcoma in 2011 when she was 11 years old after having pain in her tibia. Her initial treatment included chemotherapy and then limb-salvaging surgery—a procedure that removed healthy bone from her fibula to replace the diseased part of her tibia—followed by more chemotherapy. Three years later, Smart was still unable to walk. When she had a consultation for further surgery, Smart learned that her cancer had come back. She started a different type of chemotherapy and had her leg amputated.

“The thing about osteosarcoma is that treatment has not changed in four decades, and it’s brutal for every single child. These drugs are so toxic that they can cause hearing loss, neurotoxicity, heart damage and even secondary cancers later in life,” said Smart, who had to stop treatment early both times she was treated due to drug toxicity. “I slowly regained strength and finally returned to school full time in the 11th grade after being diagnosed in the sixth grade originally,” she said.

Smart started to get involved with other patients with osteosarcoma and found her passion in research advocacy. That’s how she met the founders of Count Me In in 2020. “What makes Count Me In so important to me is it empowers patients to participate and help to change the course of their cancer. I have not met a single osteosarcoma patient that is not eager to do everything that they can if it means kids will have kinder treatment options,” Smart said.

Helen Moore, who leads the National Cancer Institute’s Biorepositories and Biospecimen Research Branch, described similar efforts with the Cancer Moonshot Biobank​, a five-year project that collects biospecimens from patients with advanced cancer who are receiving standard treatments. Researchers collect these samples over time at NCI community oncology sites. To increase engagement, researchers have talked with patients about the realities of patient care and worked to ensure the language on their website is easy-to-understand. The program returns results to patients from their biospecimens and shares progress and results from the study with them. In its first year ending in 2021, the initiative had enrolled 85 patients.

Janet Freeman-Daily serves on the scientific advisory panel of the Cancer Moonshot Biobank. She has stage IV non-small cell lung cancer (NSCLC) that tested positive for a fusion in the ROS1 gene. This mutation is present in just 1%-2% of NSCLC cases. Freeman-Daily started an advocacy organization called ROS1ders to support others like her. Moore and Freeman discussed the important role of research advocates, who can help define research questions, lend expertise in adjusting research protocols, contribute and review research articles, and help patients and caregivers understand the process of research. In many cases, it takes training to help advocates learn to speak the same language as researchers.

In her role, Freeman-Daily helped the Cancer Moonshot Biobank standardize language around biomarkers, as well as provide patients’ perspectives around biopsies. “For a patient advocate to evolve into a patient research advocate, they need to learn more about the research process and the science behind treatments and clinical trials. They also need to develop communication skills that are effective with a variety of professionals,” said Freeman-Daily. “We need more research patient advocates to meet the growing demand.”