Cancer researchers and patient advocates spoke about progress against cancer at a public education forum sponsored by the American Association for Cancer Research. 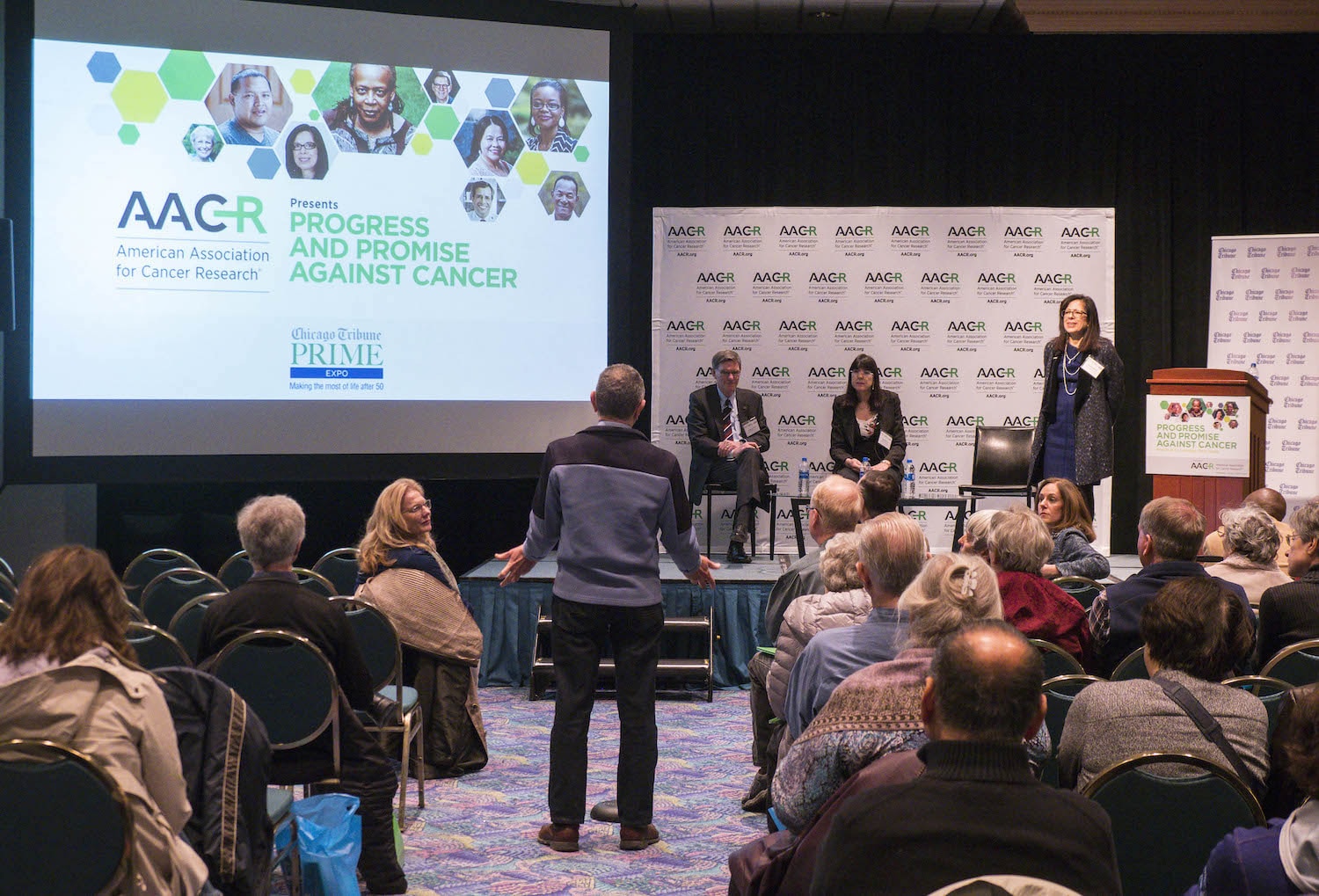 “This is a historic time in cancer research,” ​said Elizabeth Jaffee, president-elect of the American Association for Cancer Research (AACR), citing breakthroughs in cancer research and treatments​​​​​ that are extending and saving lives. Jaffee spoke at a public education forum sponsored by the AACR in conjunction with the AACR Annual Meeting 2018. ​

Among the developments causing optimism, speakers at the event said, are the possibility of identifying and treating an abnormality before it becomes cancer; knowing the genomic profile of a person at birth and taking steps to reduce disease risk; and making new cancer treatments available to all, rich and poor, around the world.​

Jaffee, an oncologist and immunotherapy researcher and deputy director of the Sidney Kimmel Comprehensive Cancer Center in Baltimore​, spoke as part of “Progress and Promise Against Cancer,” held April 14 at the Chicago Tribune Prime Expo in Rosemont, Illinois. The AACR Annual Meeting 2018 is taking place in Chicago April 14-18.

The renowned researcher spoke excitedly of the promise of treating cancer with immunotherapy—using the body’s own immune system to kill cancer cells. Progress has been rapid since the immunotherapy drug Yervoy (ipilimumab) was approved by the U.S. Food and Drug Administration to treat melanoma, she said. More immunotherapy treatments have been developed that can treat more types of cancer, among them colorectal and lung cancer.

Oncologist and researcher William Hait spoke of coining a new word, “immorbidity,” which he defined as aging in total freedom from disease. Hait, global head of Johnson & Johnson External Innovation, described a large goal, creating a world without disease, and likened the solution to making a modern car with sensors that indicate when something is about to go wrong. If humans could have “check engine lights,” Hait said, intercepting cancer before it starts would be possible.

Olufunmilayo I. Olopade, an oncologist and director of the Center for Clinical Cancer Genetics at the University of Chicago, called for increased genomic testing before cancer develops. She said such testing could guide adoption of strategies to avoid cancer, including following tailored screening recommendations, taking steps to reduce cancer risk through lifestyle changes, and possibly undergoing treatments like chemoprevention, in which a healthy person is treated with medication to lower the odds of getting cancer.

Adriana Albini, a pathologist at Bicocca University in Milan, Italy, said that “many Americans face substantial barriers to a healthy lifestyle.” Albini, who is also director of the Vascular Biology Lab at the MultiMedica Research Hospital, described healthy steps that can be taken before and after cancer develops: stop smoking, maintain a healthy weight, eat a varied diet, limit alcohol intake, avoid excessive sun exposure, engage in regular physical activity, avoid chronic infections, and follow evidence-based screening guidelines. Albini also spoke of other risks, including where one lives or works, the social and community environment, the availability of quality health care, and other factors.

Brown described the difficulty he had getting his physician to order a prostate-specific antigen (PSA) test for him to screen for prostate cancer, even though he had a family history of the disease and is African-American. The risk among African-American men of developing and dying from prostate cancer is higher than in other groups. He eventually found a new doctor, he said, adding that cancer patient advocacy “teaches us how to have conversations with our physicians to enrich and extend our lives.”​