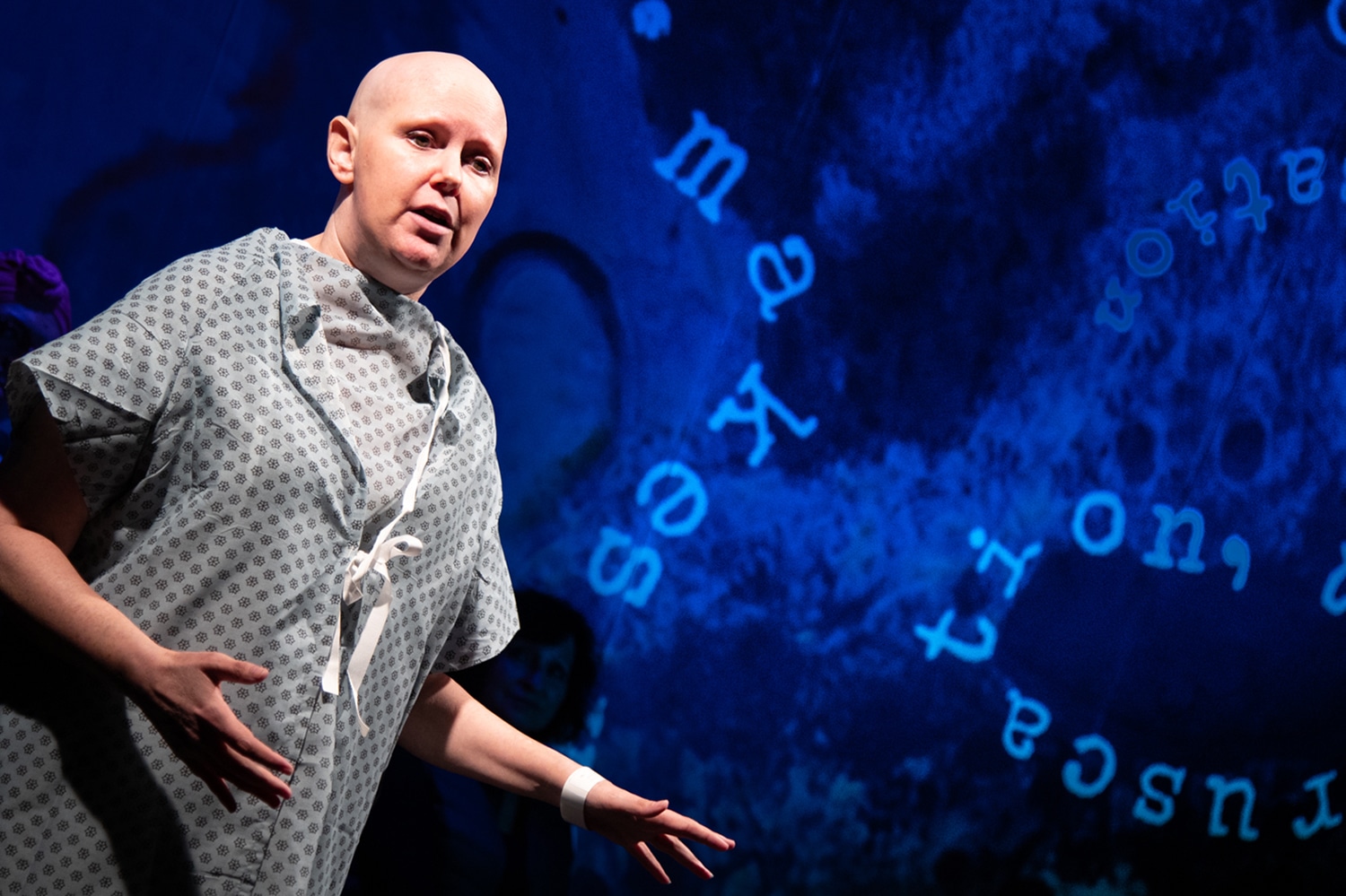 Erin Cronican, who is in treatment for cancer, takes the stage in the New York City-based production of Wit. Photo by Russ Rowland

ERIN CRONICAN, a New York City-based actor with extensive stage, film and television credits, has always believed art can be a powerful force for change. Her latest role is the lead in Wit, a Pulitzer Prize-winning play that focuses on the last days in the life of an accomplished and exacting literature professor who has been diagnosed with stage IV ovarian cancer.

Cronican is playing the role of Professor Vivian Bearing, who is contemplating her contributions to research—both in literature,​ as a professor, and in medicine, as a study participant. The role is far more than an exercise in character development for Cronican, who was first diagnosed with and treated for early-stage breast cancer in 2015 and has been undergoing treatment for a stage IV recurrence since 2018.

Cronican and her spouse, Brynn Asha Walker, are producing the play through the Seeing Place​, a theater company they started together as an outlet for marginalized and often unheard voices. To provide further opportunity to experience and talk about the play, the Seeing Place offered tickets to patients, caregivers and health care professionals at Mount Sinai Hospital, where Cronican gets weekly chemotherapy treatments, although response was dampened by the threat​ of the Omicron variant. “For me,” Cronican says, “Wit is more than about cancer. By presenting it, I am part of something much bigger than myself.”

Cronican recently spoke with Cancer Today about the production, which opened Dec. 30, 2021, at Paradise Factory in New York City’s East Village, and runs through Jan. 16, 2022.

CT: How did you come to choose this play for production?
CRONICAN: My journey with the play began in 2002, when I was hired to play the role of the nurse, Susie. It was life-changing for me. I believe that Susie is the heart of the play—the one who gives audiences a glimpse into what kindness and compassion really mean. For three years, I performed the play for the graduating students at UC San Diego medical school. We were told time and time again that seeing the play changed their views on the importance of patient-centered care. It’s also what spurred me to use my acting skills toward teaching others. I worked as what’s known as a “standardized patient,” which is an actor who plays different types of patients, to allow medical students to practice their clinical skills, including bedside manner. The blend of medicine and art really feels like a calling to me.

CT: What made you want to take on the role of Vivian?
CRONICAN: When I was diagnosed with metastatic breast cancer in 2018, I pulled the play off my shelf and began to move toward my own catharsis. Alone in my apartment, I read the role of Vivian aloud and cried profusely. Then I pulled myself back together and suggested the play to my partner, Brynn, who is now also my spouse. The production was rescheduled from May 2020 due to the pandemic. I’m very lucky to be alive now and able to do it.

CT: How would you describe the effect that performing the role has had on you personally?
CRONICAN: What Vivian is going through is not entirely like my own experience, so at times it has been easy to “try on” another character while still speaking truth about the cancer experience. For example, the healthy-one-day, stage-IV-the-next experience is Vivian’s. I was initially diagnosed with early-stage breast cancer in 2015 and had two-and-a-half years of being cancer-free. During that time, I worried that every ache and pain was a recurrence. The character I play is in denial and shock, [whereas I] had always been waiting for the other shoe to drop.

At times, it’s very difficult. Many times, the play brings me to tears. Vivian has trouble expressing her emotions. So it’s a challenge to find a way to bundle up my own feelings—uncovered with years of therapy—to reveal a more logical way of dealing with cancer. Truthfully, when I was first diagnosed in 2015, I was much more stoic. I’m trying to reignite that more methodical thinking [to play Vivian] for this production.

CT: What are you hoping the audience will come away with after seeing this performance?
CRONICAN: What I want most is for them to be moved by what they experience. I also want this to inspire everyone to embrace patient-centered care. Much of my energy as a cancer patient goes toward advocating for myself—practically demanding patient-centered care on a day-to-day basis. If my efforts in this play could inspire that kind of action, that would be wonderful. Finally, what I truly hope for is for those touched by cancer to feel seen. To feel understood. And, my goodness, I’m beginning to weep as I give that answer.

CT: What role do you see for theater in promoting social action?
CRONICAN: There’s a place in theater for the stories of people who are disabled or have chronic illnesses. But you don’t see them often, and you definitely don’t see actors who are dealing with these things in these roles. I’m proud to be part of a company that makes room for this, and works with my circumstances, and​ helps others in the same circumstances to be seen.