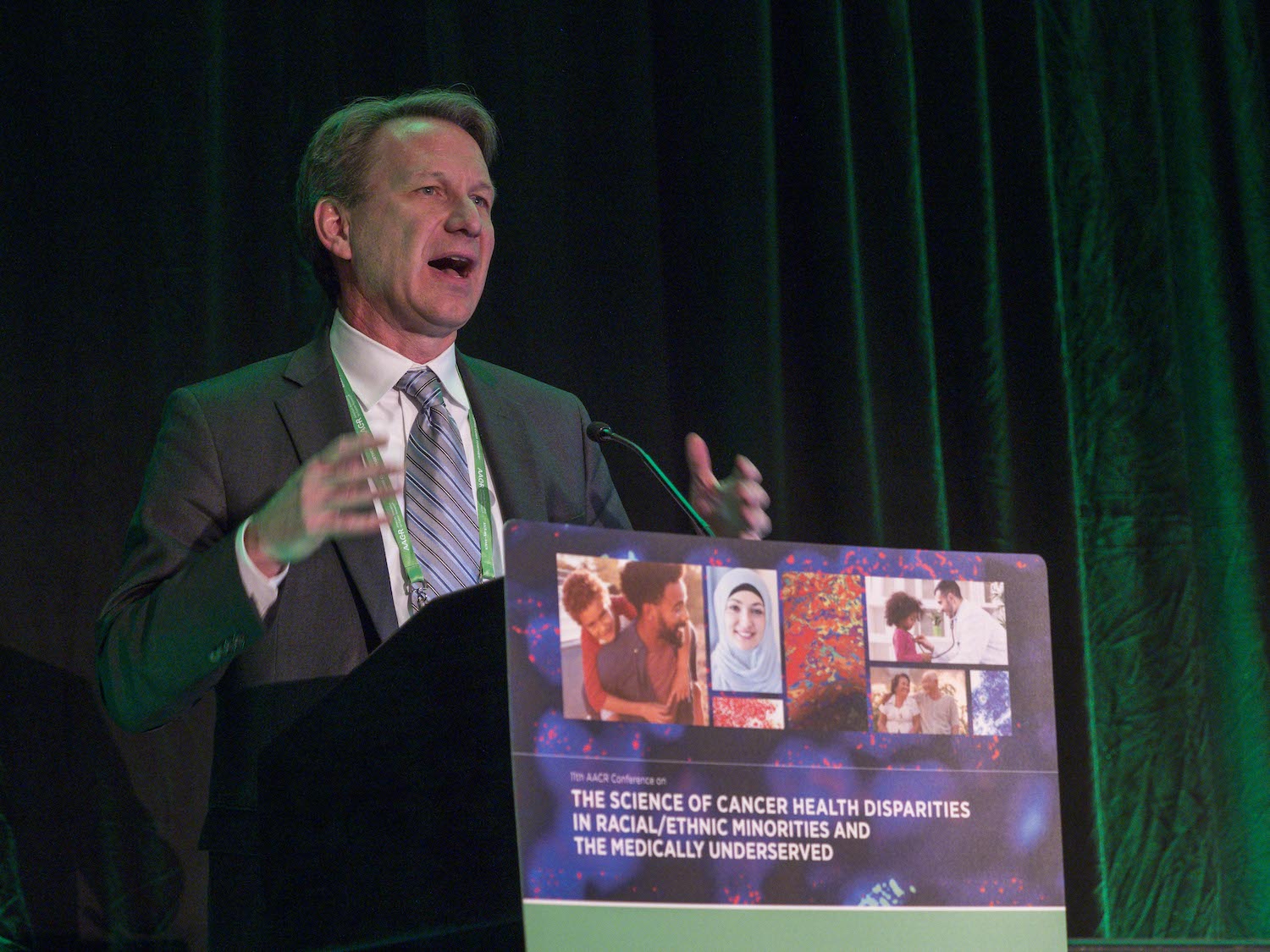 Norman “Ned” Sharpless, director of the National Cancer Institute, speaks during the 11th Annual American Association for Cancer Research Conference on the Science of Cancer Health Disparities in Racial/Ethnic Minorities and the Medically Underserved. Photo by © AACR/Todd Buchanan

It’s an exciting and unprecedented time ​for cancer research, but not everyone benefits from research advances. Take the following facts: Breast cancer death rates have been decreasing in recent decades, but African-American women with the disease are more likely to die from it than white women. Alaska natives and American Indians have the highest death rates from kidney cancer of any racial or ethnic group. And women with cervical cancer who live in rural areas are twice as likely to die from the disease as women in urban areas.

Researchers and patient advocates are learning about these inequities—and evidence-based approaches for combating them—at the 11th Annual American Association for Cancer Research Conference on the Science of Cancer Health Disparities in Racial/Ethnic Minorities and the Medically Underserved. The event is taking place in New Orleans Nov. 2-5.

“Disparities are caused by so many things. There’s race, access and socioeconomic status, and education and rural versus urban. It’s a really hard problem to understand,” Sharpless said, addressing a room full of hundreds of researchers and patient advocates. “It’s a tough problem, but I think that also, from a science point of view, that makes it a very interesting problem. There’s a fascinating interaction between biology and environment that causes disparities, and working out each one, you just never know where those trails are going to go.”

Although statistics show that cancer survivors are living longer, there are pockets of concern: cancers that remain recalcitrant to treatment and that affect certain populations disproportionately. Sharpless noted that disparities research has become a hot area of focus for the leadership of the NCI over the past 15 years. These efforts have been pushed forward, in part, by strong bipartisan support for cancer research, he said, including an additional $1.8 billion infusion of NCI funding from the 21st Century Cures Act, passed in 2016, which fueled efforts to accelerate cancer discoveries based on Blue Ribbon Panel recommendations.

“There was discussion at the time as to whether or not one of those 10 focus areas should be a disparities-related topic and the decision was made that that wouldn’t be the right way to go, that instead they would weave disparities research throughout the NCI because it’s too important to make it one of the 10,” Sharpless said.

The effort, called the Cancer Moonshot Initiative, called for taking steps to reduce cancer incidence and mortality. It also provided a springboard for investigating strategies to help eliminate disparities. For instance, researchers are looking into a self-testing method for women without access to Pap tests to screen for cervical cancer at home. Other research is exploring the effectiveness of one dose of the HPV vaccine compared to two doses, Sharpless said, which could ultimately help increase patient adherence. Most recently, in July 2018, the NCI, along with the Prostate Cancer Foundation, launched a $26.5 million study to understand why African-American men experience more aggressive prostate cancer compared with men of other racial and ethnic groups.​

The NCI has also provided supplemental grants to fuel research to address disparities. For example, the Accelerating Colorectal Cancer Screening and Follow-up Through Implementation Science Program, which resulted from the Blue Ribbon Panel recommendations, aims to implement evidence-based colorectal cancer screening practices. A supplemental grant provided funding to roll out the program to American Indians, who experience higher mortality rates from colorectal cancer and lung cancer compared to whites, Sharpless said. “That is frustrating because they are two cancers where we can do something,” Sharpless said. “Tobacco control works and screening works. So we are making progress, but there is still a ways to go.”

Sharpless also highlighted efforts to increase participation by underrepresented minorities in clinical trials. He noted that clinical trials should aim to increase diversity both among patient participants and researchers who are doing the studies. He closed his talk by noting that efforts to address cancer disparities, while complex and challenging, could be one of the most powerful tools for affecting change at the community level.​