Walking Back From Cancer

An American expat in Norway describes how a favorite walking trail aided him during treatment and recovery. 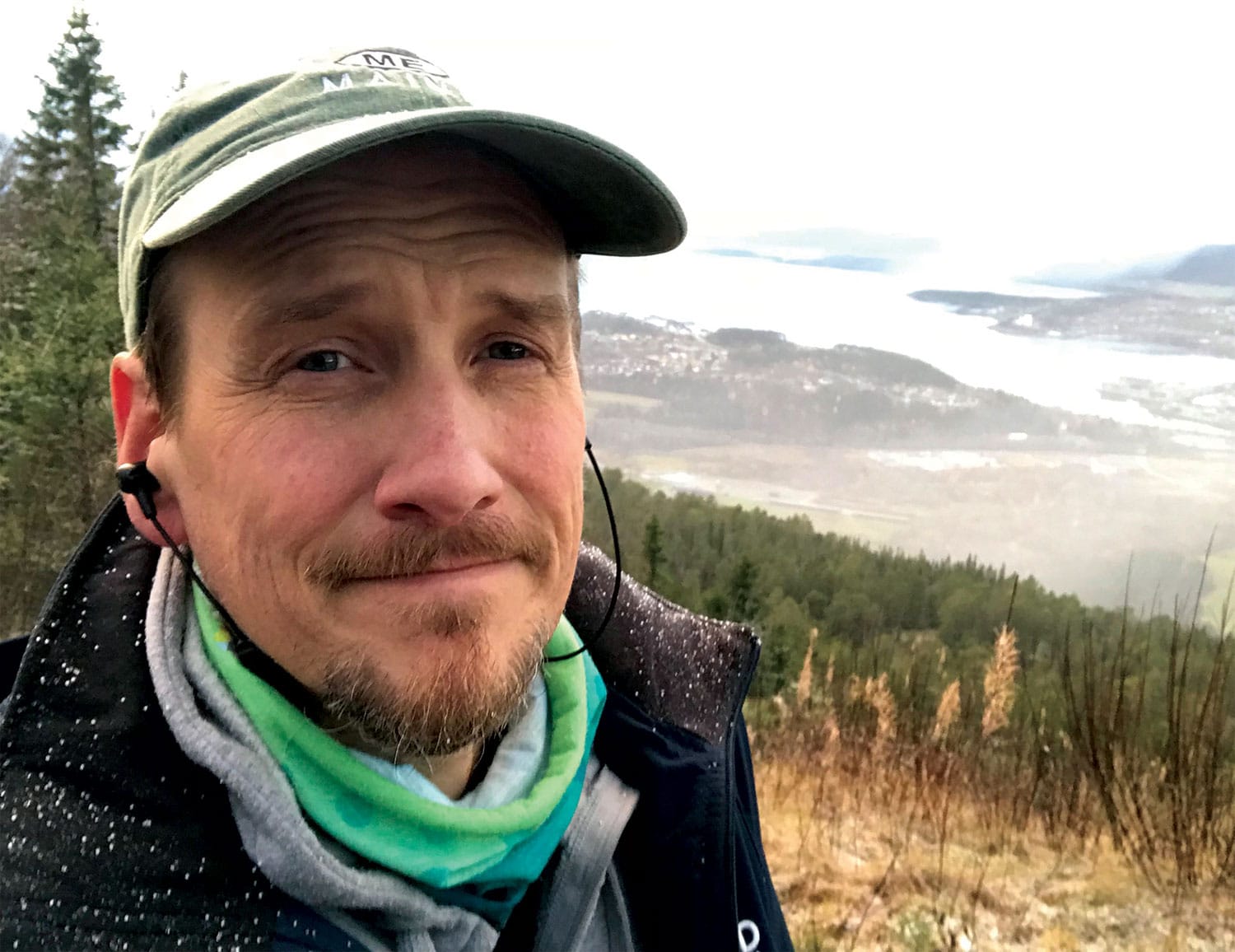 I CELEBRATED MY 45TH BIRTHDAY ​​​on a surgeon’s table in Norway, my neck cut wide open for the purposes of a stem cell transplant using my own cells. Half my face was covered, so I used my one available eye to scan the room. Three more doctors had joined the surgeon to take a look. Their observations didn’t have to be translated into English for me to grasp that their interest in my condition wasn’t a good sign. It was July 2015, and I was in St. Olav’s Hospital in Trondheim receiving treatment for mantle cell non-Hodgkin lymphoma.

After the stem cell transplant, I spent 10 days at the hospital in quarantine. I had no hair, no eyebrows and no mustache as a result of chemotherapy treatment. Tubes had been inserted directly into my chest and threaded to a vein in my neck. On the day I was to leave, I packed my bag and dressed. I had lost weight, and my jeans no longer fit. I said my goodbyes to the kind nurses, using one hand to ensure that my pants remained around my waist and not around my ankles. Back at my house in the town of Steinkjer, I discovered that my friends had set up a cot next to the bathroom for me to make my journey there as short as possible.

By the end of August, I could make it to the end of the street, where I could see the nearest fjell, a landscape feature somewhere between a hill and a mountain. The next month, I could walk as far as the horse farm, around half a mile away. By December, I was finally able to reach the bench at the base of the fjell, a 50-minute walk round trip.

By January 2016, my hair, my eyebrows and my mustache had returned. I went back to work part-time, teaching classes and grading homework. But my fatigue increased as the days went by. In May, I discovered a lump in my jaw that kept me from sleeping through the night. I called the doctor’s office as soon as it opened, only to be told that he was off for the day. I called my boss, who drove me to the hospital. “Someone with a medical degree is going to poke this lump today!” he declared. Surgery was scheduled, but a four-day weekend kept me waiting. My doctors told me the cancer was also in my intestines. I would need another stem cell transplant, this time using cells from a donor.

I spent the spring and summer walking to the fjell and building up my strength.

“I saw you out walking in the rain,” said my American friend James, who lives down the street.

“NAV [Norwegian unemployment and sick leave] is paying me to get well,” I replied. “It’s my job to get well, so I walk.”

In October 2016, I stood on the top of the fjell. The sky was bright blue and the air was crisp. I remember thinking that if the climb left me exhausted for the next two days, it would be worth it. I needed a strong memory of the view to get me through the bone marrow transplant in Oslo, halfway across the country. I needed to be strong enough to survive the treatment and to get myself home to Steinkjer. I thought back to my stem cell transplant a year earlier, which left me so weak that I was barely able to walk. This time, I had prepared a will because there was a real chance that I would not return home.

October was coming to an end and the leaves were turning yellow. I took a flight down to Oslo, then a train, then a tram all the way to the end of the line. After the transplant, I stayed close to the hospital, walking two laps around the building and the nearby dental university. My recovery went better than expected, so after a little over a week, they moved me out of the hospital to a hotel next door.

I kept walking through November. Sometimes I went too fast, which made climbing the three steps to re-enter the hotel a struggle. One day, emboldened by a Dropkick Murphys song playing through my headphones, I ran out of energy 100 yards short of the hotel and had to rest after every few steps until I made it back inside.

My friend Tor visited, filling my fridge with cheap beer and a bottle of moonshine. Between the medication I was taking three times a day and the fact that my hair had fallen out, drinking clear alcohol in a bottle with a handwritten label seemed like a risky proposition. The night before I was due to leave, my American neighbor James happened to be in Oslo on a business trip, so he dropped in for a beer. In December, it was time to go home to Steinkjer. With this in mind, I had completed only one lap of my usual walk the day before my departure, tapering my exertion as if I were preparing for a track meet back in high school. After morning blood tests, I turned in my unused medication at the hospital pharmacy. (Similarly, I had poured the moonshine down the drain.) I took the tram to the central station and took my seat for the nine-hour train ride home. My friend Mats picked me up after 11 p.m. at the train station in Steinkjer. Mission accomplished.

Just 36 hours after arriving home, my temperature was over 101 degrees Fahrenheit. It was 2 a.m. on Sunday. I called my neighbor Ola, a veterinarian. (At 2 a.m., this was close enough to a doctor for me.) He was at my door in a flash. We discussed my treatment protocol and he called an ambulance. I was admitted to the nearby Levanger Hospital and learned I had two gut infections. The medication I was put on to prevent graft-versus-host disease knocked me back hard. A nine-minute walk from my room down to reception and back left my legs shaking.

When I was 17 and insanely fit, running 10 kilometers a day, my high school track coach taught the team isometric exercises. Nearly 30 years later, this knowledge seemed more relevant than ever, so I did isometrics every morning and every evening in the hospital room, as well as a walk around the hospital every day. Christmas and New Year’s Day came and went. The staff made a committed effort to feeding me lutefisk, a traditional fish dish in Nordic countries noted for its gelatinous texture. With every new plate of lutefisk, I wondered why this was the default meal.

Finally, I was sent home again. It was January 2017, almost two years after my original cancer diagnosis. I started walking all over again. At 1 p.m. each day, wearing spiked shoes to gain traction on the ice, I walked to the end of the street. Then to the horse farm. Then to the turn to the fjell. Then to the start of the dirt road. Then a push (too soon) up the snow-covered dirt road to the bench at the start of the trail. I took a photo and sent it to my brother in the U.S.

Great! he replied. You can go a little further each day.

“No, I can’t,” I responded. “I really, really can’t.” For a few weeks, my limit was making it to the bench. My next milestone was venturing up to the stream. It was still frozen, but the distance seemed right, and the view would show the change of seasons.

Weeks passed and I visited the stream each day, accompanied by increasing numbers of reindeer; first three, then eight, then 12, then 17. Finally, I pushed beyond the stream to the next little bridge at Korsdalen corner. I pushed up the next steep incline but found nowhere suitably picturesque for a photo to send to my brother. Even after another 30 meters of flatland and a short uphill, there was nothing distinctive enough to photograph. A bit of flatland and another steep uphill at least yielded a rock to sit on. I could only produce a photo looking back down the trail, but I’d made some forward progress.

Soon, spring was well underway, and the stream was running. The next stretch was largely flat with one small bridge and a short ascent that led to a bench that overlooked the town. I sent a photo of this view to my brother, who responded, “You’re at the top!” I certainly wasn’t: The hard part of the fjell was still to come, but it was a good seat with a nice view.

The next stage was a short, steep climb to the next bench. It was now June and the biting deer flies were murder, but I had to sit and rest and let my heart rate go down. At the beginning of July, I started pushing further along the final long, steep section, doing so in secret without sending daily photos to my brother. Finally, the big push came on July 6. My heart rate was in the 150s. I should have waited one more week, but I made it.

I do “The Walk” almost every day, even now that I have returned to work. The goal is not simply to make it to the top of the fjell. It’s much more than that. Every now and again, I have to stop to allow a moose, reindeer or roe deer to pass, which makes it difficult to keep an accurate measure of my heart rate or time how long the walk takes me. Fortunately, those details aren’t the important part.

Walking has been part of my recovery and a method of looking after my mental health. It’s given me a way to take some control over getting well. Occasionally I go with a friend, and one suggested I share this story. I’ve been very lucky, and I am very thankful. Tusen takk bestemor, tusen takk Norway—thank you grandma, thank you Norway.

Steven Ford is a mantle cell non-Hodgkin lymphoma survivor from Massachusetts who lives in Norway.