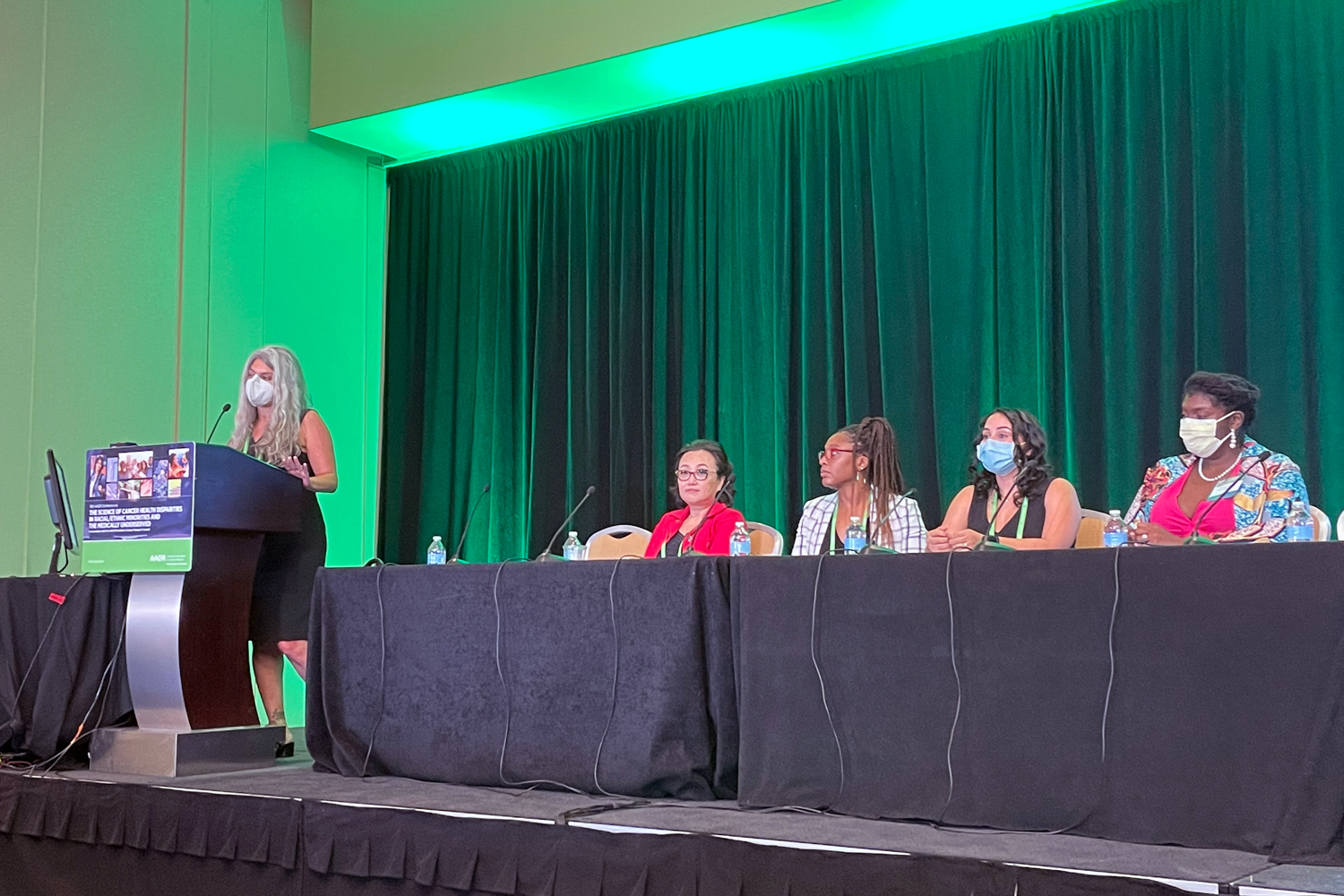 Co-chair Yamile Molina opens a session on survivorship disparities Sept. 18 as part of the 15th AACR Conference on the Science of Cancer Health Disparities in Racial/Ethnic Minorities and the Medically Underserved in Philadelphia. Also pictured are, from left, co-chair Susan Hong and presenters Arnethea Sutton, Carol Ochoa and Timiya Nolan. Photo by Thomas Celona

TO ADDRESS CANCER HEALTH DISPARITIES, health systems need to look beyond the walls of the clinic and focus on the communities they serve.

That was the take-home message behind the research presented during a session on survivorship disparities Sept. 18 as part of the 15th American Association for Cancer Research (AACR) Conference on the Science of Cancer Health Disparities in Racial/Ethnic Minorities and the Medically Underserved, held Sept. 16 to 19 in Philadelphia. (The AACR publishes Cancer Today.)

Three presenters shared lessons on how health systems can be involved in addressing racial and ethnic disparities, specifically through outreach and educational programs. A common theme across their research was that disparities can only be addressed when providers understand the socioeconomic factors in patients’ lives.

Arnethea Sutton, an assistant professor at VCU, noted the five-year survival rate for patients with breast cancer has significantly improved in recent years due to advanced treatments.

Sutton co-authored a review that found Black women with breast cancer are nearly three times more likely to experience cardiovascular toxicities, such as heart failure and cardiomyopathy, compared with white women, she said.

To further explore that disparity, Sutton’s research looked specifically at cardiac arrhythmias. The study analyzed patient data for 825 women of all races diagnosed with early-stage breast cancer who had no prior cardiovascular disease at VCU Health and VCU’s Massey Cancer Center from 2009 to 2019. The analysis found 33.1% experienced arrhythmias after they started receiving treatment.

“Women with hypertension were two times more likely to experience arrhythmias when compared to women without hypertension,” Sutton said.

The data show 42% of the women developed hypertension after beginning treatment, which was associated with certain socioeconomic variables, including insurance coverage and geography. These variables more often negatively impact Black women compared with white women.

While studies show the five-year survival rate for childhood cancer patients is more than 80%, nearly half of those survivors develop a severe or life-threatening condition in the three decades after diagnosis, Carol Ochoa, a postdoctoral fellow at University of California, San Diego, said to open her presentation. Additionally, they are 10 times more likely to die at an early age compared with the general population.

“We know that cancer is stressful and hard, but then you add the layer of not having legal status in the United States, and these parents were consumed with fear that they would be taken away,” Ochoa said.

Her research also highlighted what helped facilitate caregiving: supportive communication from the medical team, assistance from hospital staff to navigate financial resources, support from other family members, and their relationship with God.

Ochoa noted many studies on the subject have looked at the disparities or barriers to care, but limited work has been done on interventions.

“We need to create interventions that are effective,” Ochoa said, saying efforts should build on what’s been shown to support Hispanic caregivers, such as strong communication from providers and social supports.

While the first two presentations focused on where the health care system can improve, the final one highlighted a burgeoning success story.

Ohio State has launched the Partnering in Negating Statistics (PINS) for Black Women Initiative, in which academic, community and government partners “come together across sectors to educate, to provide access to resources and also to partner in science, and the whole aim of this is to be able to co-build solutions—we want to co-build interventions together,” Nolan said.

“It’s not just your typical health fair,” Nolan said, noting it’s a chance to capture data about women in the community. In two years, 319 women—88.7% of them Black—have completed the screening.

The screenings focus on the Life’s Simple 7 metrics from the American Heart Association: blood pressure, blood sugar, body mass index, cholesterol, diet, physical activity and smoking status. Women who have good cardiovascular health by those metrics are less likely to have breast cancer, Nolan said. While most women reported they believed their cardiovascular health was good or excellent, screenings showed they generally had intermediate health, signaling a need for community education on heart health.

“Clinic-to-community models may provide a solution to increase engagement of Black women to find an avenue for prevention and survivorship resources,” Nolan said, noting the need to “meet community partners where they are.”

“We all have to come together, wrap our arms around the community and bring the clinic outside of the walls of our institutions,” she said.