Keeping her grandfather’s cancer a secret from him felt counterintuitive to Tina Chai as a teen, but conversations with other Chinese Americans helped her understand the reasons Chinese physicians and families may practice cancer nondisclosure. 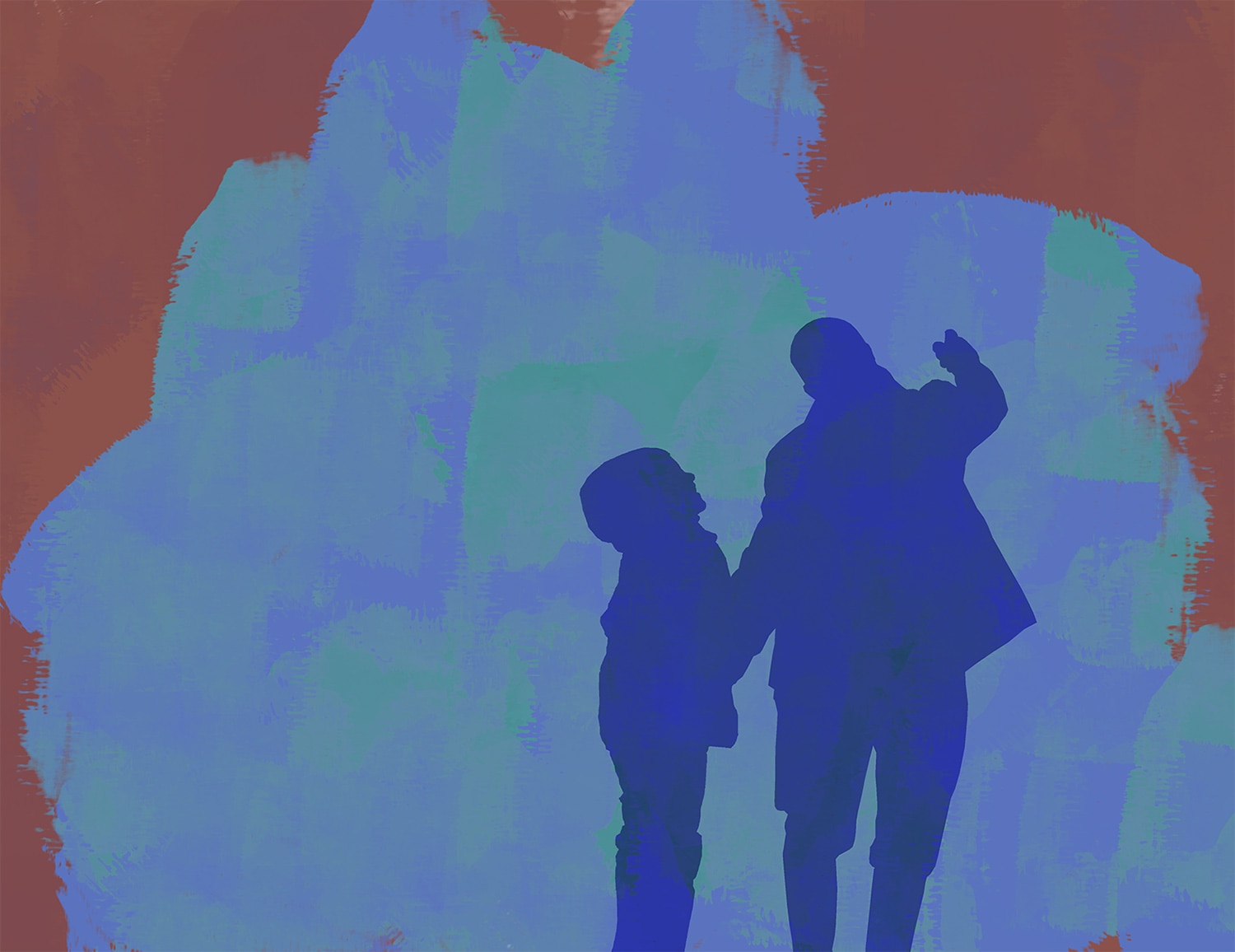 Illustration based on photo by monkeybusinessimages

Each person we know ​​triggers a memory of a specific place, smell or image. When I think of my mother, I recall the devil’s ivy vines that covered every window ledge in our first apartment in America. When I think of my father, I see his distinctive spiky hair, dyed jet black with gray roots sprouting under each tip. My grandmother always reminds me of the smell of freshly steamed dumplings and Nanjing duck.

When I remember my grandfather, I see his slow and stiff motions: barely bending a finger to pull his tan sock up to his ankles, placing his pale hands on his thighs to push his body straight up and taking a few careful steps over to the next chair. He was diagnosed with Parkinson’s disease when I was 3, and in my earliest memories of him, I recall a quiet, stolid man who grasped onto my shoulder as a makeshift cane when he abruptly lost balance in the middle of a room. He was aware of his every next move and medication. He sought control over a disease that, at any moment, could make him lose control of his body. When I was 13, my grandfather was diagnosed with leukemia following a routine blood test. This time, he knew nothing. By request of my father and grandmother, the entire family kept his cancer a secret from him.

Over the years, through talking to Chinese American friends and with the release of The Farewell—a 2019 film following a Chinese American family that decides not to tell their grandmother of her stage IV lung cancer diagnosis—I have come to realize what had happened to my grandfather is not an anomaly. In China, it is common for physicians to withhold diagnoses of terminal illnesses like cancer from patients at the request of their families. The family, rather than the patient, is placed in charge of decision-making, and the patient is often led to believe in an illusion of health.

Andria Li, a first-year medical student at Vanderbilt University in Nashville, Tennessee, shares a similar story. Last winter, when her grandfather was diagnosed with colorectal cancer, her family did not tell him. As her grandfather, whom she calls YeYe, underwent months of immunotherapy, which requires regular infusion appointments, in China, he was never directly informed of his illness.

“I was asking, ‘What does YeYe think is going on?’” Li says. “And my dad was like, ‘He only knows that he’s sick, that he’s not feeling well, and that he’s going to the doctor to get all these treatments.’”

By the end of YeYe’s life, he was losing considerable weight because he could no longer eat. There seemed to be an unspoken understanding within Li’s family, an assumption that they all, including YeYe, knew he was nearing the end of life.

Ophthalmologist Alice Zhang comes from a family of physicians, although she is the first to complete her medical education in the U.S. When her parents were training in late-1970s China, there weren’t many effective cancer treatments, so it was common for patients to die from cancers that nowadays have high survival rates. The lack of treatments made a cancer diagnosis seem like a death sentence, creating a significant problem of patient suicides, sometimes even in cases where there had been a misdiagnosis of cancer. This issue of patient suicides following cancer diagnosis prompted the Chinese health care system to talk to the family first instead of the patient, according to Zhang, who practices medicine in Charlottesville, Virginia.

Cancer therapeutics have progressed significantly, making it harder to fully hide the news of disease due to the involved nature of treatments and their noticeable side effects, including hair loss. So when Zhang’s late uncle was diagnosed with pancreatic cancer in China, he was aware of his illness, although his medical team and family did not share his cancer’s severity and his prognosis with him.

For a 2018 study published in the Iranian Journal of Public Health, a team of researchers from the U.S. and China surveyed 180 physicians in China’s Shandong province to better understand their attitudes and reasons for nondisclosure of cancer diagnoses to patients. Nearly all—98%—of the physicians said they would first discuss a cancer diagnosis with family members of the patient, and 82% reported they would not tell the patient about their diagnosis at all if requested by the family. This phenomenon, the study states, is rooted in the Chinese tradition of Confucianism, which emphasizes the family over the individual as one’s moral basis.

“Chinese culture favors the household over the individual,” Zhang says. “They see the person as part of a whole rather than a whole unto their own. In the U.S., we expect patients to take care of themselves more, and if they cannot, then they find ways to get themselves taken care of. The burden is usually on the individual. Whereas in China, there’s an expectation that each person has a family behind them.”

Li credits The Farewell for informing her of the reasoning behind cancer nondisclosure in China: When the responsibility of a patient’s health is placed on the family, there is a lessening of burden on the patient. Hiding sickness from a loved one is a way to show love.

Another factor is that doctors in China see more patients than their American counterparts. For instance, China’s ophthalmologists see over 200 patients daily, according to Zhang, which allows about three minutes per patient per regular workday. By contrast, Zhang and her colleagues have about 30 minutes per patient, similar to the amount of time U.S. oncologists spend on a follow-up appointment. According to a 2013 paper d​escribing oncology in Shanghai published in JCO Oncology Practice, one surgical specialist saw upwards of 40 patients in two hours, allocating about three minutes per patient.

“In China, there’s absolutely no time to gauge whether a person’s personality is capable of handling hard truths,” Zhang said. “There’s no time to hold their hand and allow them to cry. Family members are more levelheaded; they’re not the ones with cancer. You can tell them, they can be the ones to break the news to the patient, and you can move on to the next person.”

Growing up in the U.S., I was taught to value individuality, which for me translated into patient autonomy in medicine. So when my father expressed that my family was keeping my grandfather’s own diagnosis from him, I felt conflicted, like we were unethically deceiving him. Yet, as with most ethical issues, there is rarely one right answer. In this case, the context of culture must be considered. In Chinese culture, diluting the severity of disease or hiding the diagnosis is a way the family helps their ailing relative. By taking on the burden of illness, the family hopes their relative can live blissfully in their remaining days.

I traveled to China the winter before my grandfather passed. Amid secretive whispers and forced grins around the dinner table, I had long conversations with my grandfather alone. In those moments, I, too, didn’t know he was sick—or at least I forgot temporarily. Sitting on a wooden chair in front of his bookcase, glasses on, eyes smiling, here he was, my grandpa.

Tina Chai is a freelance writer living in Falls Church, Virginia, and a student in the Master of Arts in Science Writing program at Johns Hopkins University in Baltimore. She will be attending medical school in fall 2021.​

For adolescents and young adults who have been diagnosed with cancer, caregivers can play an influential—but often overlooked—role in providing help and support.

I have brain cancer, and my wife is a health care worker. These are some questions we had to consider leading up to and after her diagnosis with COVID-19.