The new AKT inhibitor doubled progression-free survival when added to treatment with Faslodex. 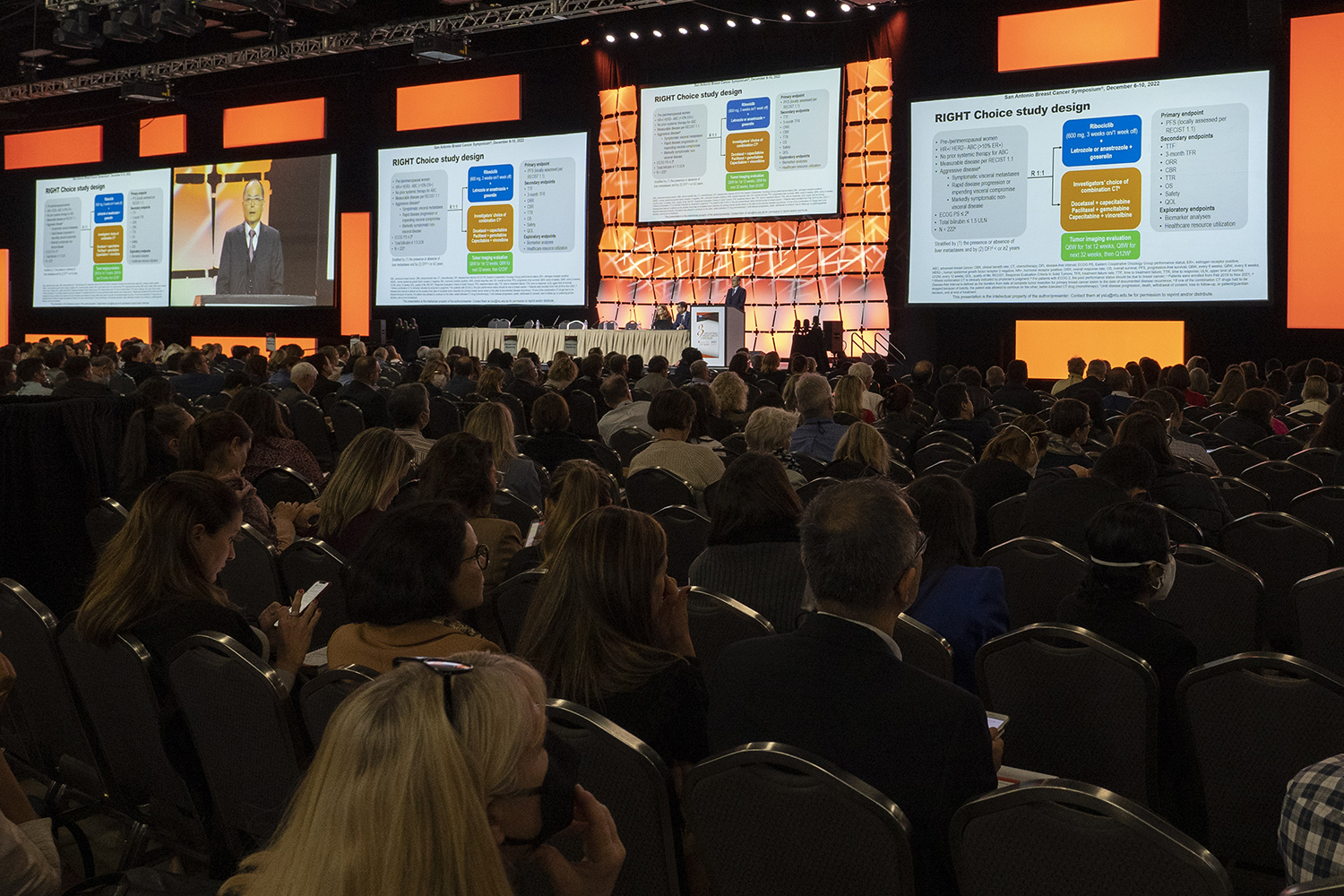 A NEW TARGETED THERAPY was found to extend progression-free survival in people with metastatic hormone receptor-positive breast cancer who had progressed after previous endocrine therapy. The results, presented at the 2022 San Antonio Breast Cancer Symposium (SABCS), held Dec. 6-10, found the AKT inhibitor capivasertib doubled the time that participants went without cancer progressing when given with the hormonal therapy Faslodex (fulvestrant) compared with Faslodex alone.

After initial lines of treatment with hormonal therapy and CDK 4/6 inhibitors, further treatment with hormonal therapy tends to be less effective, according to medical oncologist Nicholas Turner of the Royal Marsden NHS Foundation Trust in London, who presented the study. Some treatments, both currently in use and in development, target genetic alterations that are frequently seen in hormone receptor-positive breast cancers, such as PIK3CA, which is targeted by the PI3K inhibitor Piqray (alpelisib) and AKT, which is targeted by capivasertib.

To study the potential use of capivasertib in this context, the phase III CAPItello-291 trial randomized 708 patients with advanced hormone receptor-positive, HER2-negative breast cancer that progressed after at least one line of treatment with endocrine therapy to receive either capivasertib with Faslodex or Faslodex and placebo. Capivasertib was taken by mouth twice daily in four-day cycles with a three-day break.

The study found that adding capivasertib to treatment led to a 40% lower risk of progression during the study: Participants given capivasertib had a progression-free survival of 7.2 months compared with 3.6 months for people in the control group. Turner noted that the improvement in progression-free survival was consistent across subgroups, including patients who had been treated previously with a CDK 4/6 inhibitor, a type of targeted therapy now frequently used alongside endocrine therapy in first-line treatment for advanced hormone receptor-positive breast cancer.

Researchers also looked specifically at people whose tumor was found to have an AKT pathway mutation, a group comprising 41% of the total study population. For this group, people treated with capivasertib went 7.3 months without progression, compared with those given Faslodex with placebo who went 3.1 months.

Over 70% of people given capivasertib reported having diarrhea, and diarrhea was among the most common side effects seen in people given capivasertib, alongside rash and hyperglycemia. But Turner said the side effects seen were largely manageable and in line with previous research. Despite the prevalence of diarrhea, he noted that only 2% of patients stopped taking the drug due to this effect. He also pointed out that rates of hyperglycemia were less prevalent than seen in other targeted therapies available in this setting.

Though the researchers did an analysis of overall survival, it was only done at the request of regulators to confirm there was no evidence the treatment reduced overall survival. There were not enough data to establish an overall survival benefit for treatment with capivasertib at this time, but follow-up will continue.

“The improvement in progression-free survival with relatively well-tolerated side effects is extremely
encouraging,” Turner said. “We are hopeful that capivasertib will become a new treatment option for
patients whose cancer has progressed on a regimen containing an endocrine therapy.”